Church breaks ground for addition that will include new, covered front entrance 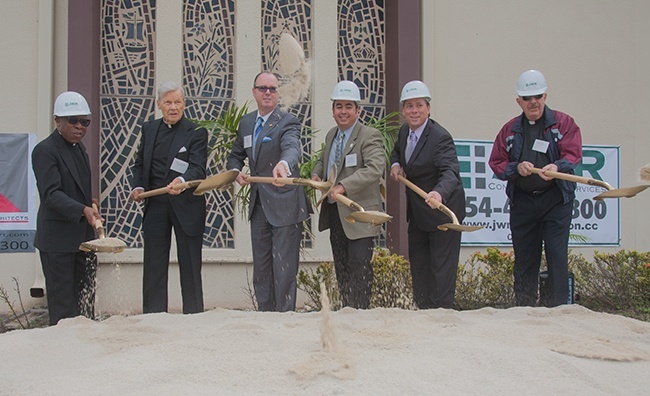 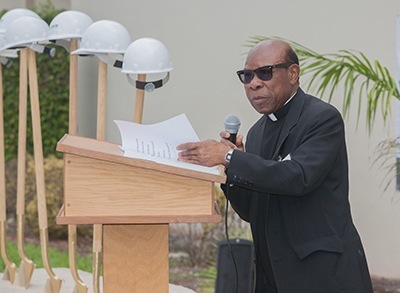 POMPANO BEACH | Unlike most churches, St. Henry never had a front entrance. Church-goers entered the church from side doors on the north and south side of the building.
The church sits on six acres at the intersection of North Andrews Avenue on its west side and McNabb Road on its north side. The C-41 canal is on its south side, and an I-95 overpass for McNabb Road is just to the east. 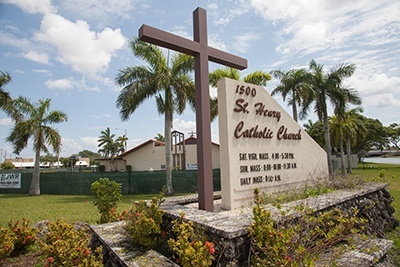 St. Henry Church as seen from North Andrews Avenue with a fence circling the construction area.

âFinally, St. Henry Church will have an appropriate face,â said David Prada, senior director of Building and Construction for the Archdiocese of Miami.
He was on hand March 27 for the groundbreaking which would officially launch construction of the $1 million project.  The construction will transform the back wall of the church into a front entrance with a covered drop-off area, vestibule, enclosed childrenâs cry room, new confessional and sacristy. In addition, the church roof and air-conditioning will receive much-needed repairs. 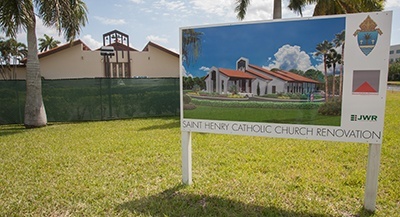 Rendering of future front entrance of St. Henry Church is shown here outside the construction site.

Archbishop Coleman Carroll dedicated the current structure in 1974, when McNabb was a dirt road. City officials did not want the church entrance to be on North Andrews Avenue, according to Louise DiPretoro, parish secretary from 1981 to 2008.
Once the addition is built, vehicles will still enter and exit from McNabb Road, but drivers will be able to drop off passengers at the new front entrance, which will face North Andrews Avenue.
âHaving to enter from side doors for weddings and funerals was ridiculous,â said DiPretoro. âAnd when it rained people would get soaked.â
The projectâs architect, Brian Herbert of Gallo Herbert Architects, has been a parishioner at St. Henry since he was three years old. His mother, Joan Herbert, is a founding member of the parish. She attended the groundbreaking ceremony.
âThe design will respect the existing architecture of the building,â Brian Herbert said.
A pile of sand for the groundbreaking event bore eight stones with the names of parishioners and church staff. The stones will be placed in the foundation of the new faÃ§ade, said Father Francis Akwue, St. Henryâs pastor.

Established in 1969, St. Henryâs parishioners celebrated their first Masses at Northeast High School, Pompano Race Track and various Pompano Beach warehouses until the church was built.
Msgr. James Reynolds, pastor from 1980 to 2005, helped build the church office, rectory and parish hall, which includes a stage and dance floor. Msgr. Reynolds also oversaw the establishment of something very unique for a Catholic church, Henryâs Hideaway. It came about when a former restaurateur donated a bar and kitchen equipment for the parish hall. The bar was rebuilt and installed in the rear of the hall and licensed by the state of Florida. It became a private club, named Henryâs Hideaway.
âIt is meant to provide a wholesome meeting place outside of commercial bars,â Msgr. Reynolds said. âItâs a place to get people to socialize around the church, kind of âholy water on the rocksâ. There was a great deal of controversy in 1984 about Henryâs Hideaway and Time magazine and NBC Nightly News anchor Tom Brokaw interviewed me about the club.â
Well-known entertainers have performed in Henryâs Hideaway, among them the Guy Lombardo band, The Ink Spots and Xavier Cugat. Msgr. Reynolds often put on a tuxedo and served as master of ceremonies for various shows, and is known for his interpretation of classics such as âNew York, New York,â âCabaretâ and âMack the Knife.â
Pompano Beach Mayor Lamar Fisher applauded the new construction.
âYou are a testimony to our city of 104,000 people,â said the mayor. âWe wish you the best of luck and are honored to have you as part of our community.â 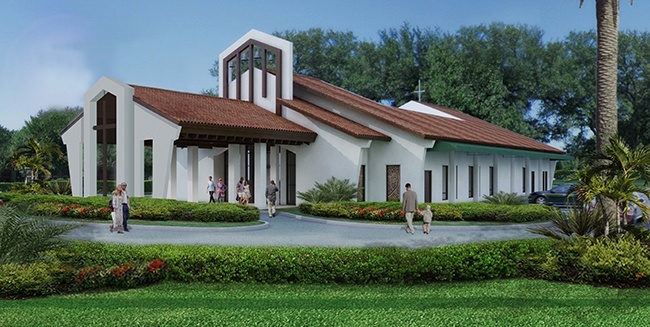