Religious freedom is under stress

For several years now, the United States Conference of Catholic Bishops have observed what is called a Fortnight for Religious Freedom. It takes place from June 21 to Independence Day, July 4, 2015. During those days our liturgical calendar celebrates a series of great martyrs who remained faithful in the face of persecution by political powerâSt. Thomas More, a lawyer, and St. John Fisher, a bishop, but also St. John the Baptist, Saints Peter and Paul, and the First Martyrs of the Church of Rome. The theme of this year's Fortnight will focus on the "freedom to bear witness" to the truth of the Gospel. 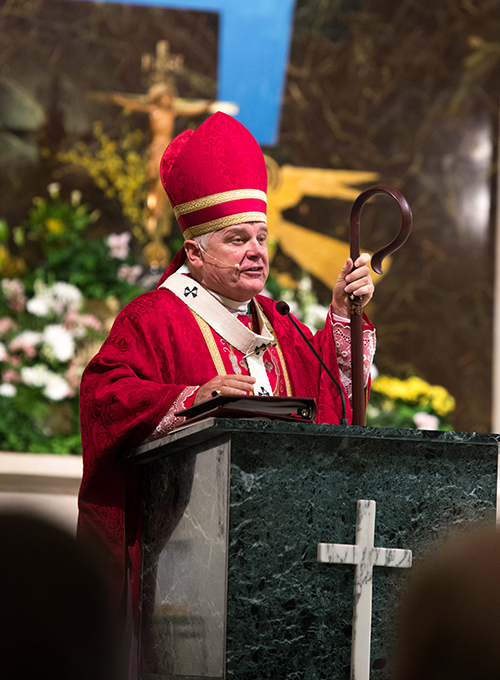 Archbishop Thomas G. Wenski preaches at the annual Red Mass for the Catholic legal community of Broward County, celebrated April 23 at St. Anthony Church in Fort Lauderdale. Catholic lawyers, judges, law enforcement and elected officials who are members of the St. Thomas More Society of South Florida convened with the archbishop for the 26th annual Mass followed by an awards reception and banquet.

Today, no one can doubt that religious freedom is under stress throughout the world. In today’s first reading we learn that among the first Christians was an Ethiopian and 21 centuries later Ethiopian Christians are being beheaded for their Christian faith on the beaches of Libya.

During the 20th Century, some 45 million Christians died because of their faith.  And the trend continues, in 2011 the Pew Research Center’s Forum on Religion and Public Life found that 70 percent of the world’s population lives in countries with high restrictions on religious beliefs and practices. And nearly a third of the world’s population live in countries where either government restrictions on religion or social hostilities involving religion rose substantially in the first decade of the 21st Century. All you have to do is read the newspaper to confirm the Pew study.

And while atrocities are committed against peoples and institutions of all the world’s religions, the International Society for Human Rights estimates that 80 percent of all acts of religious discrimination in the world today are directed at Christians and that some 150,000 Christians are killed for the faith every year.  So the Age of Martyrs did not conclude with the Peace of Constantine; it is still with us.

Even in our Western liberal democracies, discrimination against religion in general and Catholic Christianity in particular is growing â albeit in perhaps more sophisticated and less violent ways. Political analysts and human rights advocates do include religion on their agenda. But, most emphasize “tolerance” as if religion were only a source of conflict. Or, they speak about religion in terms of “individual choices” as if religion were merely the concern of an individual’s conviction and were devoid of any social consequences. And so in our country as in other Western countries, we see a tendency to relegate religion to the private sphere. And, in these countries, we see the courts chipping away at the original understanding of religious freedom. In order to fit new political agendas, religious freedom is being reinterpreted narrowly to mean merely “freedom to worship” but excluding the freedom to serve and/or the freedom to witness. The Catholic Church in this country is currently battling in legislatures and in courts against this tendency. And it is not clear that we will prevail.  Education, family law, healthcare are just some of the areas in which narrow readings of religious freedom are paving the way for antireligious policies.

Yet, just as freedom of speech depends not only on one’s right to say what’s on one’s mind but also on the existence of institutions like newspapers, universities, libraries, political parties and other associations that make up what we call “civil society” so too freedom of religion must also encompass protecting those institutions that nourish the individual’s free exercise of religion.

Of course, today, given the profound changes that have occurred in the world due to globalization and in many societies because of a growing secularism which often also includes extreme forms of individualism, the question is how to find common values that promote social cohesion and allow for peace coexistence in society and at the same time respect religious freedom. Some are tempted to limit religious freedom in an effort to find pragmatic solutions to this question. But, attempts by the State to restrict fundamental values, like the right to life, or to oblige a person to go against his or her conscience, can never be justified â such attempts violate a person’s human dignity and will prove ultimately detrimental to society itself. As persons we live in relationships â and therefore, as I have already said, freedom of religion includes a communitarian and institutional aspect, as well as inter alia the right of each religion to establish its own rules, to exercise the power of self-organization and to disseminate its doctrine. The State cannot intrude on this process and can limit the exercise of institutional religious freedom only if there is a compelling interest and only by using least restrictive means.

In this country, at least up till now, thanks to the Religious freedom guaranteed by the first amendment, religious communities have been able to play an active role in society and to express their own vision of the human person and of the policies that rule society. The Civil Rights Movement of the 1960’s was a religiously inspired movement; it was led by pastors, and those who marched gathered first in their churches. Some today resent the public advocacy of religious people and communities. They accuse us of trying to impose our views on others. Yet, as St. John Paul II explained, the Church does not impose, she proposes. Martin Luther King, Jr. and his movement for racial justice could not impose their views on the American people. They understood this â and, for this reason, they opted for non-violence. But they made a proposition that touched the conscience of a nation.

Professing religious faith should not make a person a second class citizen. While religion is personal, it is never private. The right to religious freedom has its foundation in the very dignity of the human person. Religious freedom is the human right that guarantees all other rights â peace and creative living together will only be possible if freedom of religion is fully respected. Alexis de Tocqueville, a Frenchman who wrote approvingly about our American experiment in democracy in the early 19th century, said: “Despotism may be able to do without faith but freedom cannot.”

But even as de Tocqueville pointed out almost 200 years ago, despotism comes in both soft and hard forms.  Your patron, St. Thomas More, beheaded for refusing to consent to King Henry VIII’s takeover of the Church, fell victim to a hard despotism. This type of hard despotism is decimating the Christian populations of the Middle East. But, in this country and other liberal democracies, people of faith are being increasingly subject to a soft despotism in which ridicule, ostracism, and denial of employment opportunities of advancement are being used to marginalize us. We see this when butchers, and bakers and candlestick makers are being put into the legal dock for refusing to renounce their religious beliefs. A new religious intolerance has established itself in our country â and it is being propagated by those who claimed to have been victims of previous instances of intolerance. Christian pastors are stalked and threatened for being “Christian” pastors, social scientists are expelled from universities for having turned up “politically incorrect” facts, charitable organizations and confessional schools are harassed if they take seriously their faith’s moral precepts and required their employees to support their missions.

In an environment increasingly hostile to faith, you as Catholic professionals will also increasingly experience the soft despotism of this new intolerance. May the integrity and courage of St. Thomas More inspire you â and may his prayers strengthen you so that you will not consent to neuter yourselves just for worldly status and wealth.

Fortunately for him, that Ethiopian eunuch of today’s first reading, even as he rode on his chariot away from Jerusalem and back to his homeland, was not beyond the reach of God’s grace.  Newly baptized by the deacon Philip, he returned home “rejoicing”. He who had paid a great price for wealth and status discovered a greater treasure in the joy of the gospel which came to him â as it comes to each one of us - as a free gift of God’s mercy thanks to Jesus’ passion, death and resurrection.

Today, at this annual Red Mass, you come together as members of the legal profession but also as members of a faith community to invoke the assistance of the Holy Spirit. You seek a renewed outpouring of his seven fold gifts:  wisdom, understanding, counsel, fortitude, knowledge, piety and fear of the Lord.