Father Reginald Jean-Mary shows the keys to the new church at the start of the Mass of dedication.

Deacon Fenley Saint-Jean, carrying the relic that will be placed under the altar, processes into the new church.

A Notre Dame parishioner takes part in the Mass.

Haitian dancers sway to a gentle beat at the beginning of the Mass to dedicate Notre Dame d'Haiti's new church.

Congresswoman Frederica Wilson and Haitian Prime Minister Laurent Lamothe bow their heads in prayer at the start of the Mass.

Parishioners and members of the Little Haiti community peer through the windows of the new church as seating inside was limited.

Deacon Fenley Saint-Jean prepares to proclaim the Gospel as a sign language interpreter translates for the deaf.

Crucifix that hangs atop the sanctuary of Notre Dame d'Haiti Church.

Archbishop Thomas Wenski blesses the congregation with the book of the Gospel.

A view of the tabernacle behind in the sanctuary of Notre Dame d'Haiti Church.

Members of Notre Dame d'Haiti Parish clap for their pastor, Father Reginald Jean-Mary, when he is introduced at the start of the Mass of dedication for their new church.

Image of Our Lady of Perpetual Help, surrounded by flowers, that presides over the back wall of Notre Dame d'Haiti's new church.

View of the garb worn by Notre Dame d'Haiti's choir for the dedication Mass.

Archbishop Thomas Wenski holds up the relic that he will place underneath the altar of the new church. It is a first class relic of St. John Bosco.

Archbishop Thomas Wenski pours the oil of chrism on the altar of Notre Dame d'Haiti Church.

Archbishop Thomas Wenski rubs the oil of chrism on the altar of Notre Dame d'Haiti Church.

Archbishop Guire Poulard anoints a cross and by extension the walls of the new church.

Crucifix on the wall of Notre Dame d'Haiti's new church.

Archbishop Thomas Wenski lights the incense that has been placed in each corner of the altar.

Incense burns atop the new altar as oil of chrism runs down the sides.

Archbishop Thomas Wenski incenses the altar of the new church.

The stained glass window behind the sanctuary of Notre Dame d'Haiti Church depicts the Last Supper.

Archbishop Thomas Wenski receives the traditional Haitian offertory gifts presented by young adults as they sway gently to a hymn.

Father Reginald Jean-Mary, pastor of Notre Dame d'Haiti Church, chats with Haitian Prime Minister Laurent Lamothe, left, and other dignitaries just before the start of the dedication ceremony for the new church.

Haitian dancers prepare to return to their seats after taking up the offertory.

View of the main altar at the new Notre Dame d'Haiti Church during the Mass of dedication celebrated by Archbishop Thomas Wenski and dozens of Haitian bishops and priests.

Archbishop Guire Poulard of Port-au-Prince takes part in the Mass.

Haitian Prime Minister Laurent Lamothe exchanges the sign of peace during the Mass.

Father Reginald Jean-Mary stands as consecrated hosts sit on the altar before being moved to the tabernacle in the chapel.

Archbishop Thomas Wenski takes the consecrated hosts to the tabernacle in the chapel.

View of the chapel located behind the sanctuary of the new church.

Archbishop Thomas Wenski prays before the tabernacle in the chapel.

Father Patrick Charles does the commentary in Spanish for Radio Paz's live broadcast of the dedication Mass.

Archbishop Thomas Wenski says an opening prayer before receiving keys and plans to the new church from architects Peter Kosinski Sr. and Jr.

The procession exits the church at the end of the Mass. 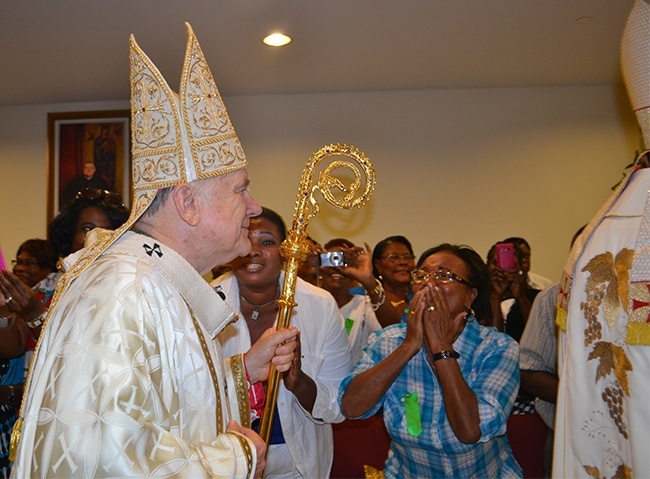 MIAMI | The joy was so great in Little Haiti Feb. 1 that it could not be contained within four walls â even if they were the history-making, cream-colored, stained-glass-windowed walls of Notre Dame d’Haiti’s new church: the first new building erected by and for the Haitian community in Miami.
Young ushers clad in white blouses and black skirts struggled to contain the throngs that began arriving at 1 p.m. for the 7 p.m. ceremony. The people pushed against the new church’s glass doors and crowded against windows hoping for a seat or a peek inside. 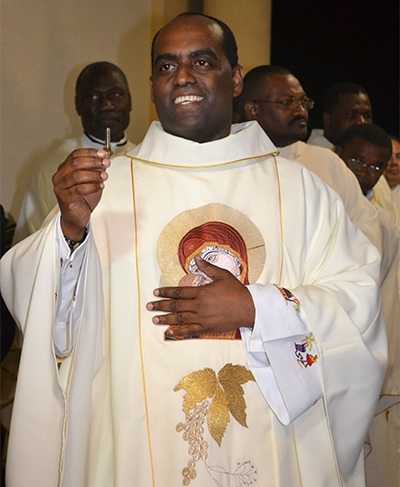 Father Reginald Jean-Mary shows the keys to the new church at the start of the Mass of dedication.

When the 1,200 ticketed parishioners and guests filled their new worship space and its 166-seat chapel, the overflow crowded into their old, 700-seat worship space and filled the outside lawn. They watched the dedication Mass on giant screens and lingered long past its 10:30 p.m. conclusion, extending the party for as long as possible.

“I couldn’t tell you. I’m so happy,” said a nearly speechless Alice St. Jean, former office manager at the mission, as she waited for the Mass to begin. “Every single person is happy.”

“I’ve been part of every youth group that you can think of,” said Jean Souffrant, who joined Notre Dame d’Haiti when came from Haiti in 1991 at age 13 and eventually became events director and fundraiser for the $5 million project.

“Now I’m seeing the fruit of that labor,” he said, describing the fundraising and building process that began in 2005 but only picked up steam in 2011.

Both Souffrant and the mission’s administrator, Father Reginald Jean-Mary, recall receiving donations from parishioners and non-parishioners, Catholics and non-Catholics. The money came in dribs of as little as 60 cents from a child and gushes of as much as $7,777 â a biblically perfect number â from a Baptist pastor’s son. Economically successful Haitian-American doctors and lawyers donated, as did working-class people supporting parents and children back home, and elderly pensioners subsisting on Social Security.

“It was just a crazy dream” back in 2005, said Father Jean-Mary, who arrived in Notre Dame just after his ordination in 2001, serving first as parochial vicar. He became administrator in 2004. 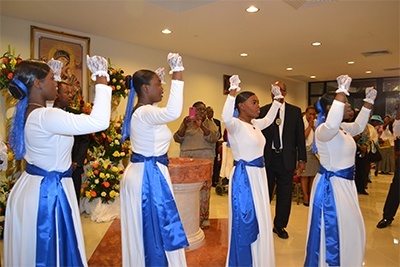 Groundbreaking for the new church took place in 2008. Then the economy went into a tailspin and an earthquake practically leveled Haiti’s capital.

“I could not talk about money in this church at all,” Father Jean-Mary said, describing it as “two years of deep suffering for me.”

He sought solace with Miami’s late Auxiliary Bishop Agustín Román, who told him, “‘Don’t worry. It will happen. Not in your time but in God’s time.’ That’s when I felt basically I let go and let God take charge of this project,” Father Jean-Mary said.

He began a prayer service every Tuesday and Thursday solely for the intention of the new church. And even when “God’s time” came and the building was complete, he relied on God’s providence for the finishing touch: $123,000 worth of pews.

No way this church â with an $87,000 Italian marble altar, a single stained glass window that cost $52,000, and a total of 25 stained-glass window memorials, all paid for â was going to be dedicated with plastic chairs in the nave. 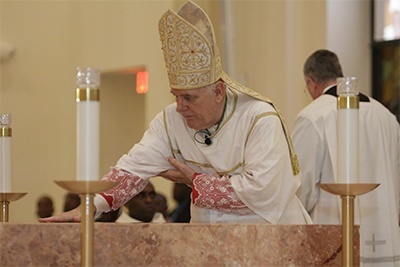 Archbishop Thomas Wenski rubs the oil of chrism on the altar of Notre Dame d'Haiti Church.

Having such a church is important because of “the dignity it brings to the community,” Father Jean-Mary said. “It’s the first building that we have erected in Miami.”

Notre Dame is also Little Haiti’s heart and soul, the priest said. Many of its parishioners come from as far south as Homestead and as far north as Fort Lauderdale because it’s the church they first called home.

“The church is a testimony of our faith and it is a symbol of our unity as a nation. This is the living room of the Haitian community â Notre Dame d’Haiti. Good times and bad times, the community gathers at Notre Dame,” Father Jean-Mary said.

Even the church’s architect, Peter Kosinski of Kosinski Architecture Inc., said he was impressed by the faith of Little Haiti’s Catholics.

“Working with these people is so encouraging, starting with Father Reggie who never gives up. He just kept the family moving toward this point in time,” said Kosinski, a Catholic who also designed St. Mark in Southwest Ranches, St. Gregory in Plantation, St. Patrick on Miami Beach and St. Elizabeth Ann Seton in Coral Springs.

“What you see is almost a small miracle,” Kosinski added. “We went for it all. We worked hard. And it’s just incredible what they were able to achieve. The Blessed Virgin Mary had a lot to do with it. She wanted it. This is her church.” 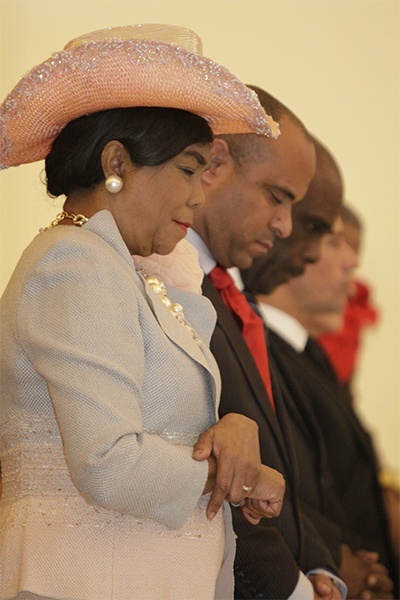 Congresswoman Frederica Wilson and Haitian Prime Minister Laurent Lamothe bow their heads in prayer at the start of the Mass.

No less joyous than the people was the celebrant of the Mass, Archbishop Thomas Wenski, who has been associated with Miami’s Haitian community since 1979, when their meeting place was nearby St. Mary Cathedral and Corpus Christi Church. In 1981, after Notre Dame d’Haiti Mission was founded on the grounds of the old Notre Dame Academy for girls, Father Wenski became its administrator. He remained until 1997, when was named auxiliary bishop of Miami.

There were also delegations of Haitians from Boston, New York and Montreal, along with more than 60 Haitian priests from throughout the U.S. and Haiti. Island TV carried the ceremony live and streamed it on its website.

“This church has always been a symbol” for the Haitian people, Archbishop Wenski told the press before the start of the Mass. “This church is like a light of hope. When they came here to Notre Dame, they felt at home.”

While walking through the church before the start of the Mass, the archbishop got a big hug from a Haitian whose art he had commissioned three decades ago: Alex Jean Altidor, currently of Coral Springs, created the colorful mural that adorns the old Notre Dame d’Haiti worship space â the former cafeteria of the all-girls high school.

The mural depicts the mountains of Haiti and the shores of South Florida with the sea, a plane and a boat in between. Above them all is an image of Haiti’s patroness, Our Lady of Perpetual Help.

“I want you to paint this on the wall,” Father Wenski had told him back then, to get the message across that “boat people, plane people, we are all refugees” â and that Our Lady of Perpetual Help loves and watches over everyone.

When he heard a new church had been built, Altidor contacted Father Jean-Mary and offered to paint a similar mural on one of its walls.

A boat is also depicted on one of the new stained glass windows, some of which are still being completed.

“That was a big stigma to people of Notre Dame,” explained Father Jean-Mary. “It’s the reason I put the boat there, to remind them of the journey.” 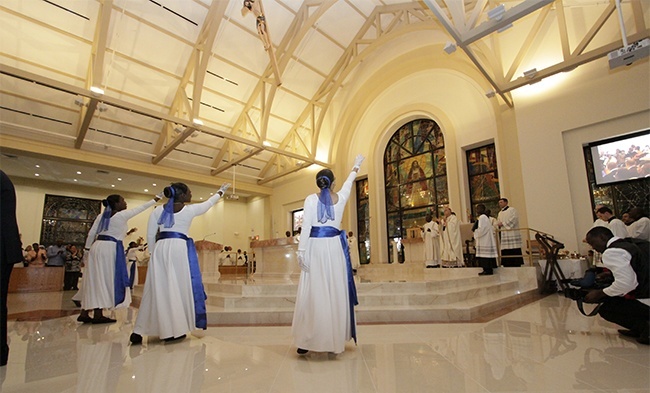 Haitian dancers sway to a gentle beat at the beginning of the Mass to dedicate Notre Dame d'Haiti's new church.

Bro. James DePiro - 02/06/2014 05:36 AM
It was truly an honor to be part of this tremendously spiritual event. The Spirit was truly alive in the faith community. I congratulate all that were involved In this event, but more so for those whose sole contributions were faith and prayer - those two gifts alone made this possible.

Josephine Gilbert - 02/06/2014 01:36 AM
A Beautiful Church, Congratulations Fr. Reginald and to all the parishioners.
God makes all things beautiful in his time.