Parish-based program helps people encounter Christ, journey with him back to Church 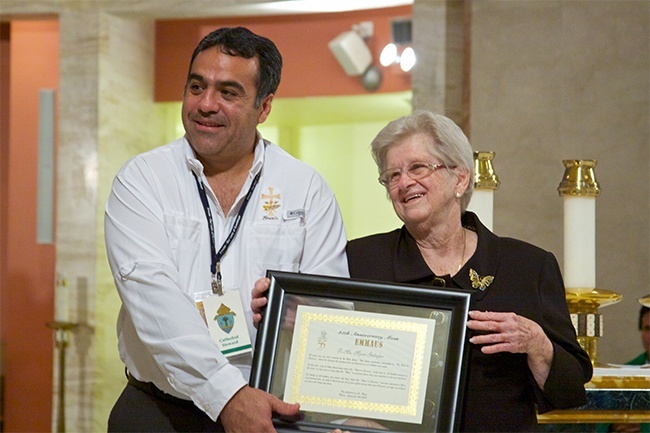 Myrna Gallagher receives a certificate for her inspiration and commitment in creating "The Road to Emmaus," a weekend which has changed the spiritual lives of thousands. Next to her is Guillermo SalomÃ³n, an Emmaus brother from Our Lady of Guadalupe Church in Doral.

MIAMI | Based on the Gospel of Luke 24:13-35, Emmaus is a weekend retreat offered by parishes throughout the Archdiocese of Miami and around the world.

Founded 35 years ago in Miami, it is for those who wish to experience God, renew and deepen their relationship with the Lord.

On Sept. 14, hundreds filled the Cathedral of St. Mary to celebrate Mass in honor of the 35th anniversary of Emmaus.

âEmmaus began here in this local Church and the Emmaus retreat experience has spread not only through the parishes of this archdiocese but beyond: reaching to South America and Europe. But it all began here through the inspiration of Myrna Gallagher and Father David Russell who honor all of us with their presence at this Eucharist,â said Archbishop Thomas Wenski during the homily. 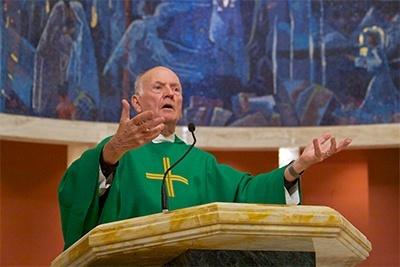 Father David Russell, who helped create Emmaus, gave the closing remarks at the Mass. He began with the Emmaus call to action, "Jesus Christ is Risen," and everyone replied, "He has risen indeed."

Emmaus began as a ministry to women in 1978. After intense prayer and much thought, Gallagher and Father Russell, her then pastor at St. Louis Parish in Pinecrest, established that the theme of the retreat would be based on the Emmaus reading. Gallagher and a team of other women held the first Emmaus retreat at St. Louis. In 1986, the first menâs Emmaus took place at the nearby Dominican Retreat House (now called MorningStar Renewal Center).

âYou canât really describe the Emmaus experience, you have to simply experience it yourself,â said Francisco Alzuru, an Emmaus brother from St. Agnes Parish in Key Biscayne who attended the anniversary Mass. âYou learn that there is a God that loves you unconditionally.â

Emmaus is an experience where women/men gather to be ministered to by other women/men from the parish. The pastor and other priests are present to hear confession and celebrate Mass at the retreatâs conclusion.

âIt is very important that it is parish-based because you see each other every Sunday and you get renewed,â said Gallagher. âMaybe you are down this week and heâs up and he brings you a good message and uplifts you. Itâs about leaning on one another. Itâs about asking the pastor what the parish needs and volunteering to do that. You canât do those things if you donât know the people and thatâs part of the retreat.â 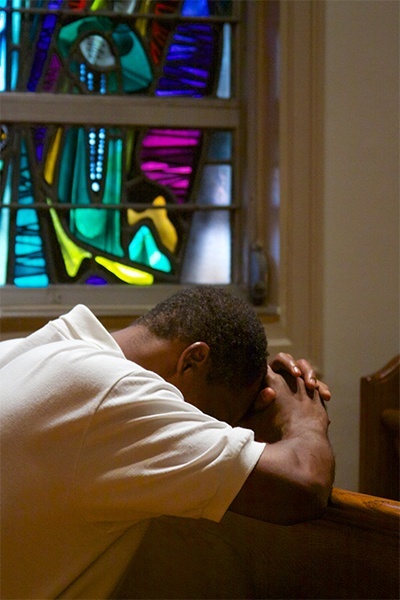 An Emmaus brother prays during the solemn Mass marking the 35th anniversary of the retreat.

Since it is a parish-based ministry, there is no database to know how many people have actually attended an Emmaus retreat but it is estimated to be in the thousands.

Emmaus is held in either English or Spanish throughout the archdiocese and has expanded throughout the United States, Europe, the Caribbean, Central and South America. It has reached even China and Cuba through undeground movements.

âFor many of you, the Emmaus experience was one in which your hearts and your eyes were also opened to recognize the living Christ who walks with you along your own lifeâs journey,â said the archbishop in his homily. âIt was an experience which perhaps helped you to become âhomesickâ for the Fatherâs house and then gave you the courage to return to his embrace in the sacrament of penance, the tribunal of Divine Mercy.â

During the anniversary Mass, Gallagher was presented with a certificate for her inspiration and commitment in creating âThe Road to Emmaus,â which has changed the spiritual lives of thousands.

âIt was an overwhelming experience to have received that,â said Gallagher after the Mass. âYou know, God did it. I may have written it but God made it work, he anointed it.â

Depending on the size of the parish, the Emmaus retreat is usually offered in the spring and fall of a given year. The purpose of Emmaus is to build parish community and to foster stewardship and prayer.

âMy prayer is for those that have gone through Emmaus to get back to their parish and give back, not only to the Church but to the poor as well,â said Gallagher. âThe Holy Father, Pope Francis, in his recent trip to Brazil told the bishops to âgo out and warm heartsâ and that is in the Emmaus reading. It says âour hearts are burning,â meaning if you warm peopleâs hearts you will bring them back to the Church. That is my prayer.â

To find out when the next Emmaus will take place, contact your parish. 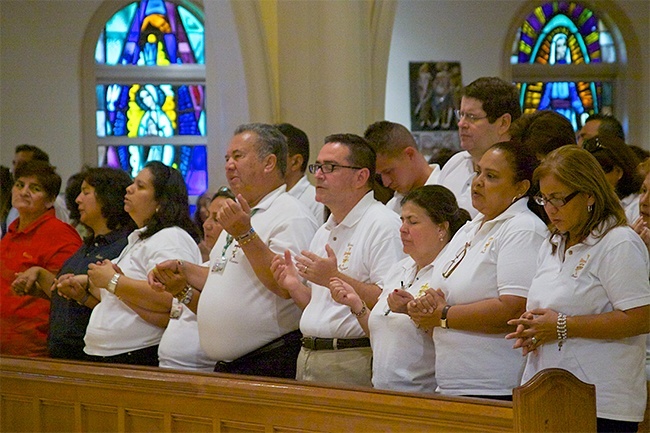 Hundreds of Emmaus brothers and sisters gathered at St. Mary Cathedral Sept. 14 for a Mass celebrating the 35th anniversary of the creation of the Emmaus retreat.

Smitty Dawson - 09/25/2013 04:10 PM
This was a special Day for me after 15 years of working this ministry. to see and hear and rejoice with my brothers and sisters. It is heart warming that the years have gone by so fast. And that we have witnessed to so many people all these years. It has been a great Learning and teaching environment about our faith and our own personal journey of Faith along the way! Aleluia! Jesus Christ is Risen! smitty