Deliver us from storms

How a grotto, prayers seem to keep Key West safe from destructive hurricanes 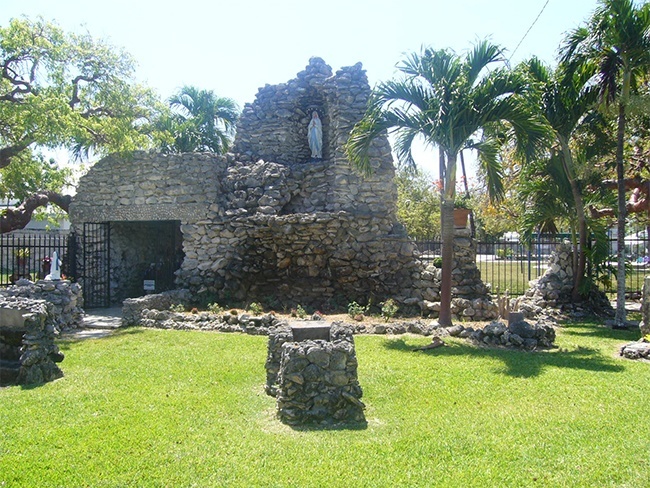 View of the grotto and shrine to Our Lady of Lourdes on the grounds of the Basilica of St. Mary Star of the Sea in Key West, which the natives believe has protected the island from destructive hurricanes for more than 90 years. 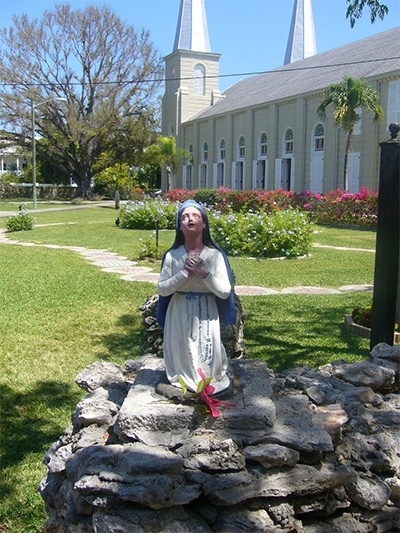 The statue of St. Bernadette faces the grotto and the image of Our Lady of Lourdes as the Basilica of St. Mary Star of the Sea rises in the background. 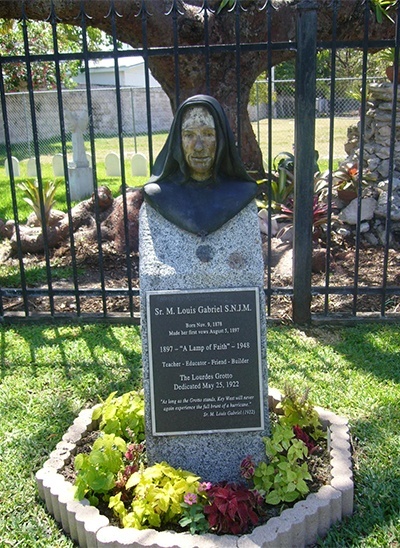 This bust of Sister M. Louise Gabriel, with her prayer that Key West be protected from storms, stands next to the grotto and shrine to Our Lady of Lourdes that she had built on the grounds of St. Mary Star of the Sea Church. 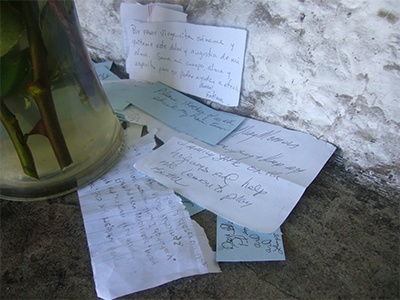 Scraps of paper with prayer requests are left at the grotto to Our Lady of Lourdes which is located on the grounds of the Basilica of St. Mary Star of the Sea in Key West.

KEY WEST | Florida ranks number one in the National Hurricane Center’s list of the top 10 most hurricane-prone states in the nation. The state has been hit by 113 hurricanes since 1851.

Southeast Florida is number one on the list of “hurricane hotspots,” with the Florida Keys as number two.Yet despite these odds, one city in the Keys appears to have been protected by divine intervention since 1922: Key West.

Conchs â those native to Key West â believe that divine intervention is due, first, to the prayer of 43-year-old Sister M. Louise Gabriel, a member of the Sisters of the Holy Names of Jesus and Mary; and second to the dedication of the Key West Grotto on May 25, 1922.

Sister Gabriel prayed, “As long as the Grotto stands, Key West will never again experience the full brunt of a hurricane.”

The story behind the grotto is a mixture of pure faith and suffering. Sister Gabriel arrived at the Convent of Mary Immaculate in Key West on Aug. 25, 1897. The 18-year-old had become a religious only three weeks earlier.

She heard about the hurricane of Oct. 5, 1844 that caused considerable damage to the Keys. She learned about the “Great Hurricane” of Oct. 11, 1846, which left only eight out of 600 homes in Key West standing. The storm of 1851 was equally as severe. She was told about the “twin hurricanes” in 1870: the first hit Oct. 8, and the second one slammed into Key West Oct. 17.

On Oct. 17, 1906, Sister Gabriel experienced the power and force of a hurricane firsthand. The storm caused 240 fatalities, not to mention many homes and trees to be knocked down.

Three years later, on Oct. 11, 1909, Key West was hit with a hurricane that newspapers described as “the worst in 39 years.” Four hundred buildings either collapsed or were swept into the ocean. Martial law was declared. The island incurred an estimated $2 million (in 1909 dollars) in damage. Every dock in the city was badly damaged, if not obliterated. Many boats broke from their moorings and collided with other boats or sunk. Key West’s population was over 20,000, and half were employed in the cigar manufacturers, the sponge fisheries and salvage companies, all businesses that were decimated.

A year later, on Oct. 17, 1910, Key West was hit with a hurricane that lasted 36 hours. The three-story concrete factory of the Havana-American Company that had survived the 1909 storm was entirely destroyed. Homes and businesses were washed from their foundations.

Key West had a lull in storms until Sept. 10, 1919, when a category 4 hurricane battered the keys for four days. Nearly every home and business sustained severe damage, with peak winds recorded at 150 mph. The damage was estimated at $22 million (in 1919 dollars.) Ten boats sank during the storm including the steamer Valbanera; all 488 on board perished, their bodies were never found.

That is when Sister Gabriel knew it was time for God’s intervention: “For God, all things are possible.”

With her 25th anniversary as a religious coming up, she was offered a trip to Rome. Instead, she asked to build a replica of Our Lady of Lourdes Shrine on the grounds of St. Mary Star of the Sea. This would be a tangible way for people to show their devotion to God, provide a place for prayer, and reinforce the belief that God is involved in the intimate details of everyone’s lives. 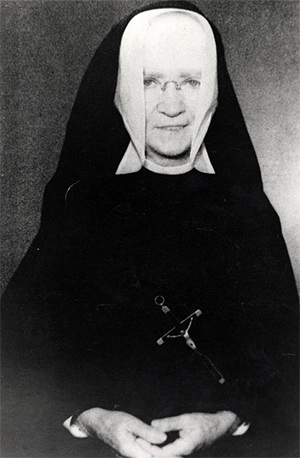 Historical photo of Sister M. Louise Gabriel, of the Sisters of Holy Names of Jesus and Mary, who spearheaded the building of a grotto on the grounds of St. Mary Star of the Sea to protect the island from destructive hurricanes.

The popular sister received funding for the grotto from many friends and contacts. Students collected coral rock from all over the island for the construction. The grotto contains a statue of Our Lady of Lourdes and one of St. Bernadette on her knees in prayer.

The Our Lady of Lourdes Shrine is open every day. People can go up and stand beside the statue of Bernadette and look up at the statue of the Virgin Mary. There is a bronze bust of Sister M. Louse Gabriel with a plague showing her prayer.

The area has an odd hush about it with a stillness that is calming in a way that is beyond description. Lit candles are aglow in an area protected by the elements; small pieces of paper with prayers scribbled on them are placed by the candles with reverence.

“People pray here every day,” explained Father John Baker, rector of the Basilica of St. Mary Star of the Sea. During the threat of a storm, “People are here all day and all night.” Very simply, he said, “We believe in the power of prayer.”

He recalled with a laugh how one day a man who was visiting the grotto said, “I don’t believe much in God, but I do believe in the grotto.”

The Grotto vs. the hurricanes

Has Key West experienced the full brunt of a hurricane since the grotto’s dedication on May 25, 1922, one that has caused complete destruction of the majority of homes and businesses, or a staggering loss of life as the hurricanes prior to 1922?

Helene Romero - 08/25/2013 05:30 AM
I will definitely visit this Grotto next time in Key West. I have been to Mary Star of the Sea Church, now a Bacilica! God is good. To Jesus, thru Mary. Pray, and don't worry. If you don't pray, just start with ONE Hail Mary. Just one a day. It starts with one pray. Pray for the grace of humility. God Bless you all in Diocese of Miami, from your neighbor, in Diocese of Orlando!