'A basilica in God's paradise'

'Conchs' and others rejoice at Mass of designation for St. Mary Star of the Sea 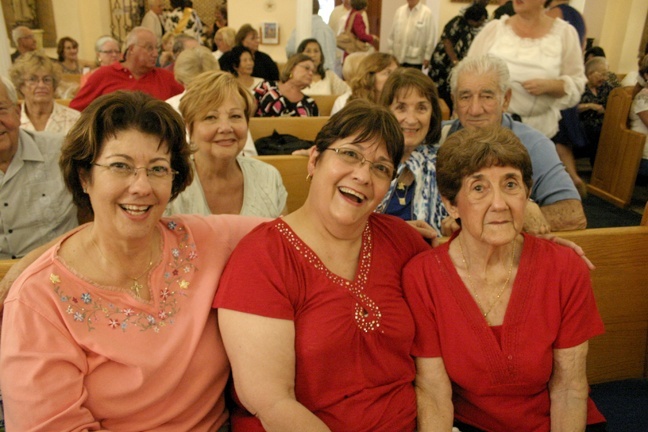 Joyce Griffin, left, sat in her pew at 9:30 a.m. to make sure she held the space for her sister, Carlene Wiseman, center, and their mother, Mary Griffin, 90. All three, and other members of their families, received all their sacraments at St. Mary Star of the Sea Church, where they have been parishioners for decades. Behind them are other longtime parishioners who also received all their sacraments at the new basilica: from left, Gloria Balbontin, 72, Anita Woodruff, 81, and Joe L. Perez, 83. 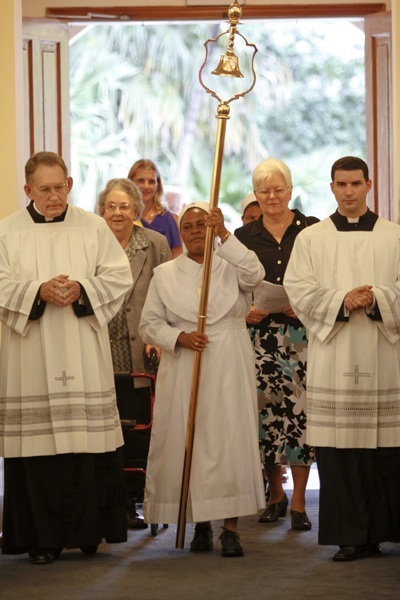 Sister Mary Silvestry Mushi, of the Sisters of the Holy Spirit who now work at the parish and school, carries the tintinnabulum (bell) into the Basilica of St. Mary Star of the Sea. Behind her are two representatives of the Sisters of the Holy Names of Jesus and Mary who staffed the parish and school for 115 years. From left, Sister Theresa Cecilia Lowe and Sister Dolores Wehle, who both taught at the school.

KEY WEST â What "conchs" have known for decades, the Vatican confirmed May 31: St. Mary Star of the Sea is holy ground.

âThereâs now a basilica in Godâs paradise. I believe God anointed this church,â said Robert DeLauro, who is not a conch â as natives of Key West call themselves â and has been in the parish only three years.

Yet DeLauro was one of three Knights of Columbus selected to accompany the ombrellino â literally a little umbrella that is one of the insignia of a minor basilica â into the church at the start of the Mass where its new status was confirmed.

âWhen you come into this parish, itâs like an ambiance you never felt before. The fellowship is rich, is vibrant. Theyâre doing Godâs work,â DeLauro said. âThereâs no doubt in my mind this is sacred ground.â

âThe faith of the people in Key West is so deep and so strong,â said Sister Dolores Wehle, one of two Sisters of the Holy Names of Jesus and Mary who processed in with the other basilica insignia, the tintinnabulum or bell. 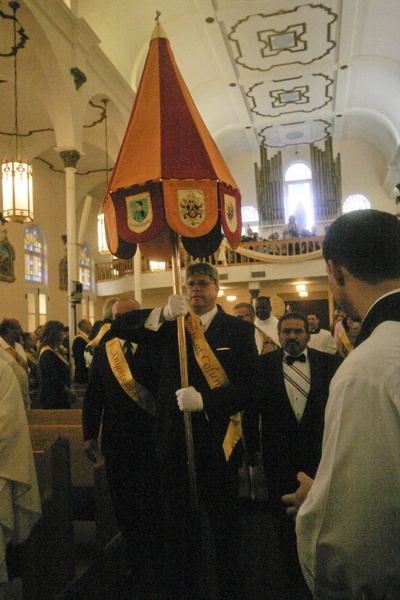 Knights of Columbus carry the ombrellino, one of the insignia of a basilica, into St. Mary Star of the Sea at the start of the dedication Mass. At center: Andy Kirby, with Chris Weber at left and Robert DeLauro at right

The Sisters of the Holy Names ministered in the archdioceseâs oldest parish 115 years, from 1868 to 1983. They opened a school for girls, known as the Convent of Mary Immaculate; a school for boys, known as St. Joseph; and a school for black children, known as St. Francis Xavier. When the battleship Maine exploded in Havana Harbor and the Spanish-American War broke out in 1898, they turned the convent school into a hospital for the wounded.

âTheir presence here raised the bar for this parish,â said Father John Baker, pastor since 2007, whose new title is rector of the basilica. âAs the needs grew, they responded constantly and adapted. They really did set the tone as to what ministry is.â

âThey planted the seeds. Everybody talks about the sisters,â said Sister Mary Silvestry Mushi, one of three Sisters of the Holy Spirit from Tanzania who now work at the parish and school. 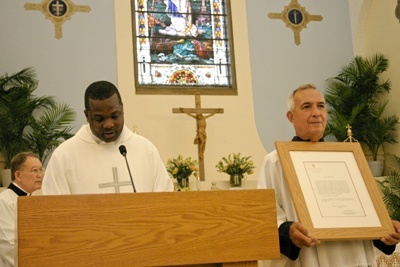 Father Chanel Jeanty, archdiocesan chancellor for canonical affairs, reads the Vatican document conferring the status of a minor basilica on St. Mary Star of the Sea in Key West, as a parishioner Tony Herce serving as an acolyte holds up the framed original.

âWe have to hold this gift,â added her fellow Sister Marietha Joseph Kimaro.

The designation of St. Mary Star of the Sea as a basilica - the first basilica in the Archdiocese of Miami - is a tribute both to its history and to its current work, said Archbishop Thomas Wenski during the Mass of conferral of the basilica insignia, which coincided with the feast of the Visitation of Mary.

The Mass drew nearly 1,200 people to the parish grounds, with more watching the ceremony over the Internet. About 500 of those present â mostly priests, special guests and representatives of the parishâs 50 ministries and groups â sat inside the church, along with a few others who had claimed a spot as early as 9:30 a.m. for the 7 p.m. Mass, to ensure being seated inside. The rest braved the heat, humidity and afternoon thunderstorms to watch on large screens put up under two tents on the parish grounds, while a third group watched from inside the parishâs retreat center. 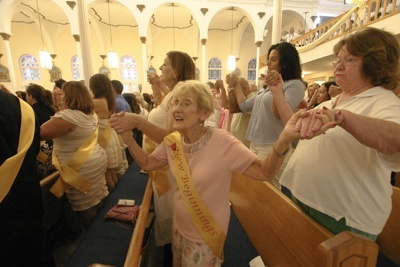 Jean Maun of the New Beginnings ministry at St. Mary Star of the Sea, prays the Our Father with her fellow parishioners.

âIâm not in great shape but when I heard about it, I said I had to get here,â said Sister Theresa Cecilia Lowe of the Sisters of the Holy Names of Jesus and Mary.

Both a conch and a convert to Catholicism, Sister Lowe graduated from Mary Immaculate High School in 1948. She converted as a freshman, entered the religious order of the sisters who taught her and then returned to teach at the school three times over a period of 10 years. She now lives in Albany, N.Y.

âIt has always been huge for the community,â she said of Mary Immaculate, Star of the Sea School, which now serves students in PreK-3 through eighth grade.

Mary Immaculate High School closed in 1986. St. Joseph, St. Francis Xavier and the Convent of Mary Immaculate merged into a single elementary school in 1961, initially known as St. Maryâs School. The name was later changed to Mary Immaculate, Star of the Sea School and it has now been changed again to The Basilica School of St. Mary Star of the Sea, âto make it clear this is the parish school,â Father Baker said.

Sister Wehle, who taught at the school for 19 years, including a stint as principal, said she liked the name change. âItâs a lot of change (but) for growth there has to be change,â she said. âAnd having these sisters here with such wonderful spirit is a blessing to the parish,â she added, referring to the Sisters of the Holy Spirit. 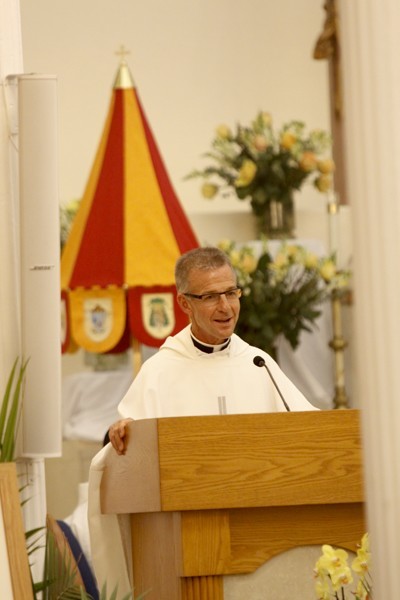 Father John Baker addresses his parishioners at the end of the Mass. Behind him is the ombrellino, one of the insignia of a basilica.

âI found faith here,â said Dana Balmaceda, a native of the Czech Republic who arrived in Key West nine years ago. At St. Mary Star of the Sea she met her husband, a practicing Catholic who âbrought me to the church and I loved it. So I stayed here. It changed my view of life.â

Balmaceda now works for the parish and her two daughters, ages 3 and 4, are enrolled in the school.

Also present for the Mass were Joyce Griffin, her sister Carlene Wiseman and their mother, Mary Griffin, 90. Joyce staked out their spot in a back pew of the church at 9:30 a.m.

âI sat. I prayed. I talked to people,â she said of the long wait. âIf I had to camp here last night to get my momma a seat I would have.â

âThis building is our family Bible,â she explained. âAll of us have been baptized, got first Communion, got confirmation, got married and buried relatives here. So this is not just a building. Itâs part of who we are.â

The island DNA also is embedded in the parish, Griffin said. âWhen you live on an island thatâs two miles by two miles, you are related to everybody on the island. You rejoice when others rejoice. You feel bad when something bad happens, and you support each other. Thatâs family. Thatâs what we are.â

A family whose doors are always open to visitors and to the needy at their doorstep: St. Mary Star of the Sea operates a soup kitchen that feeds the homeless seven days a week, and an outreach mission on Stock Island that provides groceries, bus fare, rent money, clothing, prescription medicines and job referrals to those struggling to make ends meet.

As Archbishop Wenski put it in his homily: âThis parishâs present commitment to its school as well as this parishâs commitment to social ministry, seen in its outreach to the homeless and the hungry, represent âa selfless and generous service to our neighborâ that has always characterized the Catholics of Key West since the very first settlement of this island.â 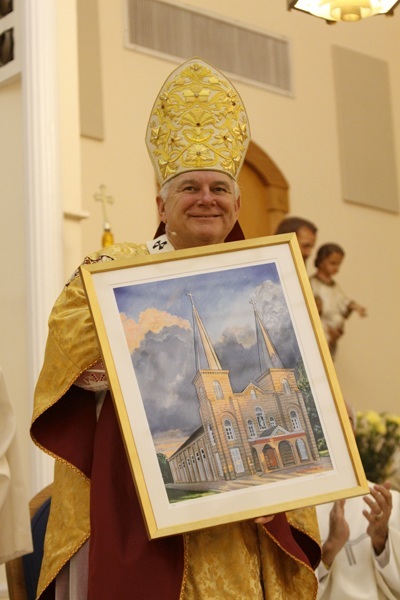 Recalling the parish history, he lauded the generations of Key West Catholics who, âinstructed in the faith by the good priests and holy nuns who served here, heroically braved isolation, storms and disease by entrusting themselves to Mary and her maternal protection.â

He cited the short-lived mission established by the Jesuits in Upper Matacumbe Key in 1568, the sporadic ministry of Jesuits from Cuba and New Orleans throughout the next 300 years, the building of the original church in 1851, the outbreaks of yellow fever that killed both priests and religious in subsequent decades, and âthe century long presence of the Sisters of the Holy Names of Jesus and Mary in teaching the young and in ministering to the sick and wounded during the Spanish American War.â

Officially founded in 1852, St. Mary Star of the Sea is the third oldest parish in Florida and was the fifth Catholic church to be built in the state. That original buidling was destroyed by a fire, suspected arson, in 1901. The current church dates to 1904, and is âa modified early renaissance revival buildingâ with both Romanesque and early Renaissance characteristics, according to the parish history.

âThis Basilica of St. Mary Star of the Sea, the southernmost parish of the United States, stands as a beacon of faith, hope and love,â the archbishop said. âIt stands as an invitation written in brick and mortar to all who visit this community â an invitation to trust in God and to imitate Mary in what she herself said: âBehold, I am the handmaid of the Lord. May it be done to me according to your word.ââ

St. Mary Star of the Sea is now the fifth minor basilica in the state of Florida and only the 73rd in the United States. As a basilica, it shares a unique link with the pope, and can display the coat-of-arms of Vatican City on its faÃ§ade and the crossed keys of St. Peter on all its furnishings. It also becomes a place of pilgrimage for Catholics.

A day earlier, at a rehearsal, Father Baker had told his parishioners, âVery few people in this entire earth have ever been to one of these celebrations. â¦ Take it in. This is going to be an amazing time of grace.â

At the end of the Mass and visibly moved, he told them, âIt is your faith that makes this place holy.â 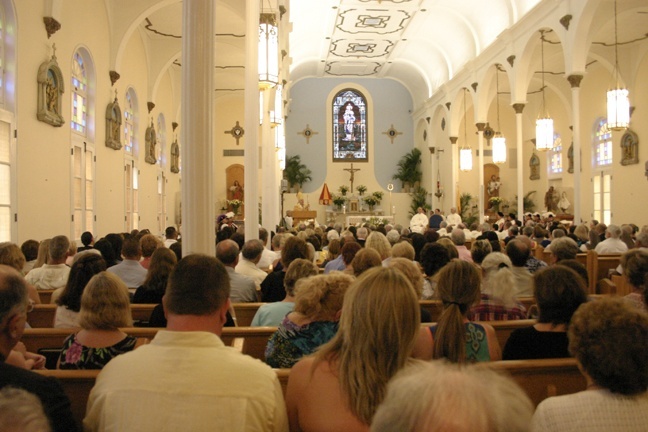 View of the new basilica, with its distinctive architecture, during the Mass.

To see more photos of this event or purchase them, click here, and sign in as a guest with the user name: flcatholic.

Rev. Peter M. P. Mongeon, KHS - 06/04/2012 12:24 PM
Congratulations, Fr. John! It is so wonderful to see a full church. I know your passion for the faith and I trust that your people know how fortunate they are. Ad Multos Annos!