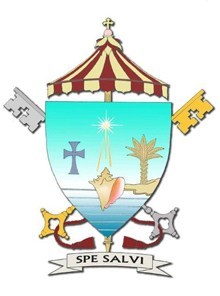 The Coat of Arms for the Basilica of St. Mary Star of the Sea, Key West: Based on the coat of arms of the Archdiocese of Miami, the position of the sand indicates that this parish was the beginning of the Archdiocese of Miami and is at the end of it. The conch shell is the conventional symbol of Key West. Of course, the star is for the parish's patroness. Below the cross and above the ombrellino is a conch pearl. The motto: Pope Benedict XVI introduced his second encyclical letter with the title, "Spe Salvi facti sumus" ("in hope we were saved") as St. Paul said to the Romans and likewise to us (Rom 8:24). Pope Benedict XVI concludes Spe Salvi with a comprehensive reflection on the parish's patroness, Stella Maris, Mary Star of the Sea.

MIAMI â St. Mary Star of the Sea, the oldest Catholic church in South Florida and the second oldest in the state, is now the first basilica in the Archdiocese of Miami. (See clarification of these terms here.)

Archbishop Thomas Wenski conveyed the ânews from Romeâ to parishioners of the Key West landmark via a video played at all the Masses the weekend of Feb. 11-12. The official designation ceremony will take place May 31, feast of the Visitation.

âLast year, I made the request for this honor through the Holy Seeâs Congregation for the Divine Worship and Discipline of the Sacraments and, at that time,  I submitted the necessary documentation as to why St. Mary, Star of the Sea, was worthy of consideration,â Archbishop Wenski said in the video. âThis beautiful and historic church (established in 1846) becomes the first minor basilica in the archdiocese and only the fifth in the state of Florida.â

The archbishop noted that its status as a minor basilica now makes St. Mary Star of the Sea âthe popeâs âparish churchâ here in the archdiocese,â and as such âshould link all Catholics here in South Florida most closely to the person of the Holy Father.â

âBasilicaâ is a title of honor bestowed on a church of historical and spiritual importance by the Holy Father. Churches honored with the title basilica belong to two classes, major and minor. There are four major basilicas in Rome (St. Peterâs, St. John Lateran, St. Mary Major, and St. Paul Outside the Walls) and 72 minor basilicas in the United States, in addition to more than 1,500 other minor basilicas throughout the world.

St. Michael the Archangel Church in the Diocese of Pensacola-Tallahassee â the oldest parish in Florida â became Floridaâs fourth minor basilica this January. The other three are the Cathedral Basilica in St. Augustine, Basilica of St. Paul the Apostle in Daytona Beach, and the Basilica of the National Shrine of Mary, Queen of the Universe, in Orlando.

âThis designation is ultimately the consequence of your faith in Jesus Christ, and the faith of those who have been here before us,â said Father John Baker, pastor, in his homily to parishioners this weekend, when the churchâs new status was announced.

Father Bakerâs new title is rector of the minor basilica of St. Mary Star of the Sea. He became St. Maryâs pastor in 2007 and said he noticed immediately a certain âgood energyâ or âkarmaâ of holiness around the historic parish. âBut what is the name for it?â he asked.

He said Archbishop Wenski, the first native son to be named a bishop in Florida, captured it precisely when he began working, two months into his tenure as archbishop of Miami, on securing for the church the status of minor basilica, âthe ecclesial word which describes precisely what you, and I and he, sense and perceive at St. Mary Star of the Sea,â Father Baker told his parishioners. âIt is faith enfleshed in love which gives hope to others.â

To be named a minor basilica, a church has to demonstrate that it deserves the rank, both in terms of its historical significance, its architectural uniqueness and its spiritual characteristics.

Father Baker described the process, which required answering 120 questions in Latin, as âa hybrid of a doctoral thesis, a grant application and a coffee table pictorial book.â
âWe had to separate fact from fiction and document everything,â he said.

HISTORICAL OUTTAKES
The following are taken from the petition sent to Rome to request minor basilica status for St. Mary Star of the Sea:
It was accomplished very quietly, with the help of a select group of parishioners and archdiocesan officials, because the mere petition was ânot a guaranteeâ that the church would receive the designation, Father Baker explained.
Among the characteristics cited in the petition are St. Mary Star of the Seaâs status as a national and state-designated historic site. Its roots date back to the 16th century, when Florida was a Spanish territory and the island of Cayo Hueso fell under the auspices of the Diocese of Havana, Cuba. Most of those early settlers were âmigratory fishermen from Cuba,â and the history of the church, along with that of Key West, has been intertwined with that of Cuba since those early days.

Today, the parish has sizable populations of Hispanics, not just from Cuba but from Nicaragua and other countries in Central and Latin America, as well as more recently from Poland.

St. Mary Star of the Sea also is the site of the first Catholic school in the state of Florida, founded in 1868 by the Sisters of the Holy Names of Jesus and Mary, who served at both parish and school until 1983. In 1986, the high school closed, but the elementary school continues to this day.

St. Mary also is a place of pilgrimage for Catholics from other archdiocesan parishes; for college students from campuses elsewhere in the U.S. who engage in mission work during spring and winter breaks; for archdiocesan seminarians and priests seeking a quiet place of reflection; and for the black Catholic youth choir, which travels there each year.

âSlaves were baptized by the Jesuitsâ at the church despite civil segregation laws, the petition noted. Also, âmay we not overlook the local pilgrimage from the local people of Key West â¦ (who) desire to find peace in this place with 283 bars.â

St.  Mary Star of the Sea serves 1,300 registered families â Key West has about 30,000 year-round residents â as well as approximately two million visitors who come to Key West each year, about a quarter of whom are estimated to be Catholics.

âWe welcome these 500,000 Catholics to our church each year,â said Father Baker. âOur Mass assemblies are often divided in half between residents and visitors.â

The parish also ministers to Catholics in the military bases and annexes that are located on the island. The nearest Catholic church is 30 miles away, St. Peterâs in Big Pine Key.

In addition to Father Baker, the parish staff consists of a Jesuit priest from the Province of Dublin, a permanent deacon, a Marist brother of the New Orleans Province who works at the school, and three Sisters of Opus Spiritus Sancti from Moshi, Tanzania who serve both the parish and school.

A perpetual adoration chapel, the Chapel of Divine Mercy, has been open since Sept. 8, 1995, and more than 500 parishioners are involved in devoting an hour each week to prayer before the Blessed Sacrament.
For 35 years, the parish also has operated a soup kitchen for the homeless that now feeds 100 people a day, seven days a week. Since 2006, St. Mary Star of the Sea Outreach Mission on Stock Island has served the working poor of the community by allowing them to obtain food, clothing, furniture, prescription drugs and referrals to other social service agencies. The mission served 22,000 people last year.
âThere are consequences to the designation of the Basilica of St. Mary Star of the Sea which require immediate ... intermediate and long term responses,â Father Baker told his parishioners this weekend. "With this designation as a basilica, the Holy Father himself holds this shining light, St. Mary Star of the Sea in Key West, for the entire Catholic Church and for all people of good will to behold and to be inspired." 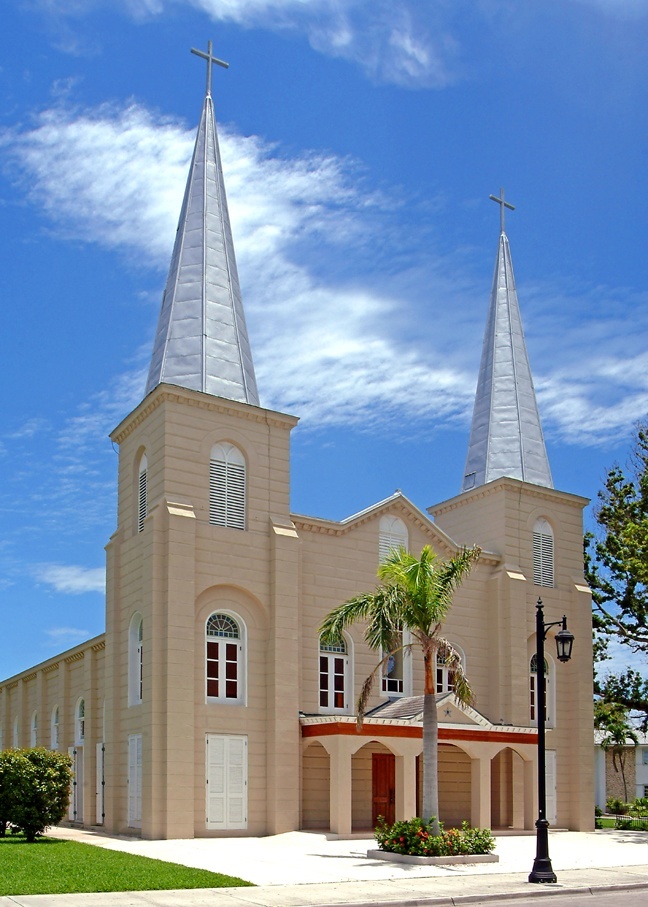 St. Mary Star of the Sea Church in Key West