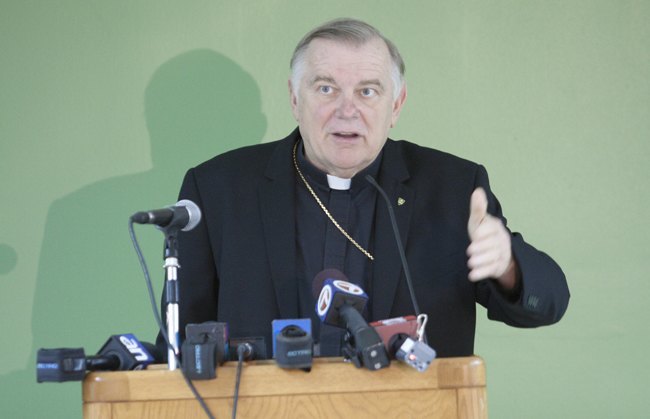 Archbishop Thomas Wenski speaks to the media regarding the archdiocese's decision to file a lawsuit in federal court against the Health and Human Services mandate that would require the Church and its entities to provide contraception and sterilization and abortion-inducing drugs as part of its health care coverage for employees.

MIAMI | The Archdiocese of Miami has now joined the 50 or so other Catholic dioceses, universities and entities throughout the U.S. who have filed a lawsuit against the Health and Human Services mandate requiring that abortion-inducing drugs, sterilization and contraception be covered under employer health care plans.

âWe feel it is a violationâ of the First Amendment, of the Federal Religious Freedom Restoration Act and of the rule-making authority of the Department of Health and Human Services, said Archbishop Thomas Wenski during a press conference announcing the action the afternoon of Oct. 19.

The lawsuit was filed in federal court on behalf of the Archdiocese of Miami, Catholic Health Services and Catholic Hospice. It was filed by the archdioceseâs legal representatives, J. Patrick Fitzgerald and Associates, along with the Jones Day law firm, which is providing its services pro bono. Jones Day is representing many other Catholic entities in similar lawsuits.

In his statement and in response to questions from reporters, Archbishop Wenski said âwe need to get this mandate overturned (by the courts) since the administration has not shown any inclination to rescind it.â

He pointed out that Vice-President Joe Biden spoke âuntruthfullyâ during the vice-presidential debate when he said there is no problem between the Catholic Church and the Obama administration on the health care issue. âThere is a problem. Thatâs why weâre suing,â Archbishop Wenski said.

He clarified that the Catholic Church is not opposed to universal health care itself, and in fact proposed a number of options when the Affordable Care Act was being debated in Congress. But the Churchâs position is that universal health care âshould kill no one and it should cover everyone.â

The current law fails on both counts, the archbishop said, because it requires employers to provide drugs and services that result in the killing of unborn children, and it also excludes âmillions of immigrants.â

The Catholic Church has long taught that human life is sacred from the moment of conception to natural death, and it has consistently opposed artificial methods of birth control and sterilization, teaching that they violate the total giving of self and openness to life which are intrinsic to Godâs plan for marriage. The HHS mandate defines contraception and sterilization as preventive health care for women.

âTheyâre trying to make us provide these services to our employees and also to provide them in our institutions,â Archbishop Wenski said. âThe state is trying to dictate to the Church how we should practice our faith. And this should not be allowed to stand. â¦ I believe that the archdiocese is defending religious freedom not only for the Catholic Church and its many ministries but for all faiths.â

The archdioceseâs health plan covers about 6,000 employees in Miami-Dade, Broward and Monroe counties. Catholic Health Services serves about 5,000 people a year in its nursing homes, assisted living facilities and rehabilitation hospitals. About half of those who receive services from the Church are not Catholic.

As currently written, the narrow HHS exemption for religious entities applies only to churches, not to church institutions such as Catholic hospitals, universities and charitable agencies. Neither is the compromise announced in February by the Obama administration a solution, because it calls for insurance companies â rather than the religious entities â to pay for the objectionable services. But the Archdiocese of Miami, like most large employers, is self-insured.

âWe are our own insurance company, so therefore we still are behind the eight ball,â Archbishop Wenski said.

To qualify under that religious exemption, nearly 100 percent of archdiocesan employees would have to be Catholic â and so would those served by the Church.

He noted that his agency provided $10 million in community benefits and indigent care last year. âIt would be such a shame if we had to close our doors because we donât want to provide these (contraceptive) services.â

Sharon Miller - 10/23/2012 10:54 AM
Thank you Archbishop Wenski for being a Light, for defending the Truth, in a world submerged in darkness and deceit. We stand behind you in deep prayer, fasting and sacrifice. May God's WORD animate us as we exercise our obligation and honor to vote: "I have set before you life and death, the blessing and the curse. Choose life, then, that you and your descendants may live, by loving the Lord, your God, heeding his voice, and holding fast to him. For that will mean life for you... (Deuteronomy 30:19-20)

Lisa P - 10/21/2012 09:03 PM
Thank you, Archbishop Wenski, for your leadership and courage in challenging and calling this threat for what it is: an encroachment upon our most cherished freedom, freedom of religion. May the Lord bless your efforts to stand up for our Catholic faith, and the faith of all those of good will.

Lisa - 10/20/2012 04:26 PM
Good for the Archbishop! Challenges to our freedoms guaranteed by the Constitution of the United States must always be defended. This infringement by the federal government is most serious and cannot be permitted to stand. I'm glad that the ADOM is now a party to this defense of our Constitutional rights.

Enrique J Canton - 10/20/2012 07:07 AM
Thank you Archbishop Thomas Wenski for defending our Religiuos Freedom.
This latest assault on Religion by the current administration of President Obama is a clear violation to the U.S. Constitution's First Ammendment.
Being a Constitutional Lawyer, President Obama should have known better. This only shows you how radical he is. Don't mess with our Constitution Mr. President!
As a Catholic, I am very happy and proud that our Archbishop has joined other Archdioceses, Universities and other entities in suing the HHS.

Natalie - 10/19/2012 10:04 PM
So happy to hear that our archdiocese is joining the HHS lawsuit! Praise God for our Church and Archbishop and for sharing the truth!