Life in the Spirit Retreat 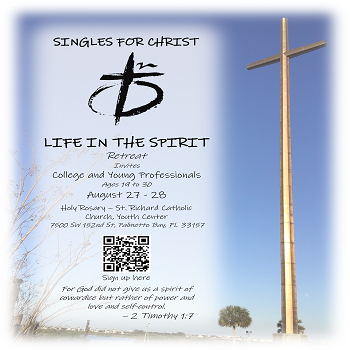 CFC Singles for Christ (CFC SFC) is one of the family ministries of Couples for Christ (CFC). It is a Catholic Christian Young Adult Ministry aimed to provide a community for those who want to know Christ and discover one’s vocation (Marriage, Religious or Single Blessedness Life). CFC SFC also organizes many different activities and events aimed to help enrich one’s faith and grow to be more Christ-like.

To be part of SFC Miami one will be welcome through a Christian Life Program (Life in the Spirit) to welcome and know each and everyone in the ministry.

SFC-Life in the Spirit Retreat

Couples for Christ (CFC) is an international Catholic lay ecclesial movement whose goal is to renew and strengthen Christian values. It is one of 123 International Associations of the Faithful. The organization is affiliated with the Vatican recognition from the Pontifical Council for the Laity. It is led by an International Council, which operates in the Philippines under the Catholic Bishops' Conference of the Philippines and can report directly to the Vatican. The community is made up of family ministries, social arms, and a pro-life ministry.

CFC Singles for Christ (SFC) is one of the family ministries of Couples for Christ (CFC). It was founded to cater to the needs of single men and women from 18 to 40 years of age. âSingleâ refers to anyone within that age group who is free from any legal impediments to marriage. The pastoral care offered by the ministry, though, is not limited to those who are called for marriage, but includes as well those who may be considering either single blessedness or religious vocation as a state of life.

Singles for Christ (SFC) initially aimed to provide a Christian support environment for single men and women.Â  However, SFC has taken a more pro-active stance in providing that environment by ensuring that it brings Christ to wherever the singles are â in the corporate setting, in campuses, in government institutions, even in prison and in developing communities.

SFC also intends to be relevant in the various realities of a single person in the aspects of Leadership, Lifestyle, Livelihood, and Love life.

There are 65,000 members of Singles For Christ all over the world covering the different regions namely Europe, North America, South America, Asia, Middle East, Africa and Oceania.