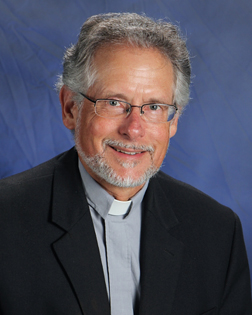 Born April 8, 1957 in New Jersey, he moved to Florida with his family around 1970, settling in St. Vincent Parish in Margate, where his parents still live. He was ordained in 1983 and served for 10 years as director of Catholic Charities' child welfare division. He has a master's degree in social work and is nationally certified as a social work manager and pastoral counsellor. He still serves as a state policy leader for the Child Welfare League of America.

During his first year of business and pre-law studies at Stetson University, while attending a retreat: "It was as if a voice was saying to me, 'Be a priest, be a priest.' It was quite audible to me. It was just a very strong urge or message. Finally, I believe I actually said it out loud. I said, 'All right, damn it, I'll do it' ... That I am a priest, that I responded to that call, is one of the things that proves to me there is a God... Why would I have thought of it? Why would I do such a thing?"

He is a runner (five miles about three times a week) and plays trumpet.

"The West Wing": "It's probably the most accurate program you're going to see when it comes to the freneticism of government."

Definitely a lawyer, "possibly elected office." His father had been a city councilman and police commissioner in New Jersey.

Happiest times as a priest:

His ministry from 1984-1988 at St. Mary Cathedral in Miami, because of what he learned from the late Msgr. Gerard LaCerra's leadership, the bonds of camaraderie among the staff and the generosity of the parishioners. "We didn't have hot water in the winter. We didn't have air conditioning in summer. We used to fight the roaches for breakfast in the morning."

"The Gospel is not a bunch of words in the pulpit. It has to be brought into action"

Role of priests and laity:

His 10 years in child welfare:

"God has a weird sense of humour. He called me to be celibate and made me the father of hundreds of kids a year." The job entailed dealing with abused and neglected children and their parents: "We were the God committee. Because we had to decide very often who was going to be a family and who was not going to be a family... We were asked to play God."

His involvement in the community:

Despite running a one-priest parish, he serves on the board of the Urban League of Broward County, on the ethics committee at Plantation General Hospital and the coordination committee for Broward County's Million Meals organization. "The Gospel is not just a bunch of words in the pulpit. It has to be brought into action."

"The best time of my week is the Sunday liturgy. Everything else makes no sense without the liturgy." 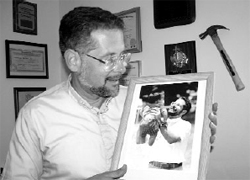 Father Tywoniak treasures this 1993 how to of himself with one of the special needs children he helped find a home for when he was director of Catholic Charities' child welfare division. "Adoption isn't about finding children for childless couples. It's about finding parents for a family-less child."

"Dealing with the drain of being on duty 24 hours a day. You never stop being a priest."

"There have been periods in my life when I've questioned. I've looked back and felt the angst of what if I had married and had kids? After a long day, to come home and have my beautiful wife waiting for me with dinner. And then I think, get real! Because that's just a fantasy, too."

"I've faced death on many occasions during my ministry." The worst moment perhaps was weathering Hurricane Andrew at St. Anne's Residence and Nursing Center in south Miami-Dade. "You can't watch a building fall apart around you and not think you're going to die." He had often wondered how he would react to death, and thought of the martyrs. When it hit him that he might die that day, "a great sense of peace came over me. Then I went back to doing what needed to be done."