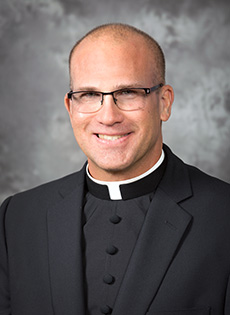 Father Marino was born July 27, 1967, in Flushing, N.Y. His family later moved to South Florida, and in 1985 he graduated from Chaminade College Preparatory (now Chaminade-Madonna College Preparatory) in Hollywood. After his freshman year at The Catholic University of America in Washington, D.C., he was accepted as a seminarian for the Archdiocese of Miami. He studied at St. John Vianney College Seminary in Miami and St. Vincent de Paul Regional Seminary in Boynton Beach, and was ordained April 16, 1993.

He has served as pastor of St. Michael since July 2008, and before that was pastor of Visitation Parish in North Miami. In addition, he serves as adjunct spiritual director at St. John Vianney; spiritual director of the Italian Apostolate; chaplain of the Knights of St. Gregory and St. Sylvester; and presbyteral council representative for the East Dade Deanery. He also is a member of the international movement Communion and Liberation, and serves as the priest responsible for member priests in the U.S.

âMy parents owned a fish market in Pembroke Pines and both my brother Joseph and I worked there when we were younger.â

âBy the time I had my first Communion, I knew I wanted to do what the priest did. I wanted to stand at the altar and make Jesus present. My vocation stems from the liturgy of the Church.â

âProbably work in the food industry, in some aspect of the seafood business. âBefore I became pastor of Visitation Parish I was the fine dining food critic for the Miami Herald Broward edition for three years, from 2000 to 2003, and that was a lot of fun.â

âNot living up to people's expectations, even though sometimes their expectations are unreasonable.â

âA man who is faithful to Christ, the Church and the liturgy.â

âMy own human failure is my disappointment â¦â

âI don't believe there are any, especially in this archdiocese, because we are all so diverse with such a variety of style.â

"I enjoy music; I like having either classical or opera playing in the background. I have an appreciation for the human voice.â

Father Marino is pictured here with his mother, Marie, and his brother Joseph, whom he calls âa great blessing in my life.â

"Many people (and) no one person in particular. I have spiritual fathers that I model my life as a priest after: Pope John Paul II; Msgr. Luigi Giussani, founder of Communion and Liberation; Archbishop Fulton Sheen; and Cardinal Joseph Ratzinger before and after becoming Pope Benedict XVI. As a high school student, I received the book 'Introduction to Christianity,' written by Cardinal Ratzinger, and although I didn't understand it I knew that it was important for my life. I have never put that book down since."

âI would say to not communicate God's love and truth as I should. My own human failure is my disappointment, my lack of charity and mercy.â

âI have lots. The fact that I wake up in the morning, that people feel welcomed at my parish, being the person that can see the good in others are all joys. My brother Joseph is a great blessing in my life.â

âI am only doing what I am supposed to do. â¦ I may do it poorly, but I am still doing it.â

âAllowing my human failures to overwhelm me, to disappoint people or let them down.â

âWhen I fail to show charity and mercy, sometimes on a daily basis.â