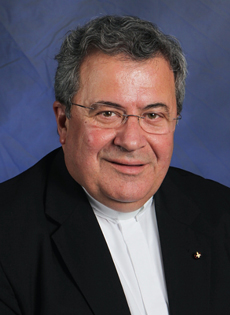 Born Oct. 31, 1956, in Santa Clara, Cuba, Msgr. Marin came to the United States with his family - parents and younger sister - at age 4. They settled in Chicago. He went to medical school in the Dominican Republic and completed his residency at the University of Miami, specializing in investigational cardiology. He was ordained for the Miami Archdiocese in 1989 and later obtained a canon law degree from The Catholic University of America. He served as chancellor from 1993 - 2003 and, in addition to his work as promoter of justice and judge on the metropolitan tribunal, as well as chaplain of the Catholic Physicians & Dentists Guild. Msgr. MarÃ­n died Dec. 28, 2018.

He felt the call in fifth grade at Our Lady of Mercy Catholic School in Chicago, where he was an altar server. He would have entered the high school seminary had it not been for the advice of the school's new principal who suggested he attend a "prestigious" public high school instead that focused on math and science. "The whole background of my family being in medicine came back again and I went back to medicine. Priesthood was out of the picture for those years."

In 1976, his first year of medical school, there was a huge explosion at a sugar mill in the Dominican Republic. "The 400 men who were burned kept asking for a priest. The only priest was away at a mission. It was very clear to me, seeing all of the doctors and the nurses and 123 men dying, that there was more need for priests than there was for doctors." He decided to quit medicine, but again was advised not to by the seminary rector, who told him "the best thing to do was to finish medical school because that would always be in the back of my mind. God would call me later." God did - in 1983 in New Orleans. "I was giving a keynote speech at a cardiologists' convention. These two gentlemen walked up to me and said, 'Are you a priest?' They were Jesuit physicians." They told him: "Your whole empathy for the patient almost speaks of you being a priest already."

On making the final decision:

"It was very clear to me, seeing all of the doctors and the nurses and 123 men dying, that there was more need for priests than there was for doctors."

"Some of my medical colleagues. They didn't understand it. But in the long run they have come asking for help at times and are glad that I'm there for them. The friendships have remained."

Our Lady of Guadalupe: "There's such a great community that is constantly challenging me. I can place many of my gifts there at the service of this community."

None. He sees them as "challenges, as moments of growth, time to learn. The alternative would be to sit down and cry and I don't do that."

"Just being with people at the most important times of their life - the birth of a child, the death of a relative, their wedding day. Their whole life, you're involved with them."

"To realize that you're not going to please everybody. I'm a pleaser. I like to keep people happy. You realize that not everybody is going to be happy."

He collects coins and stamps and is an avid reader, at least one book a month. "I've had three at a time going." He especially loves reading history books.

He likes all types, from Annie Lenox to Bach. He also has season tickets to the opera.

People he most admires:

His parents, who sacrificed their own futures to give their children a future in a free land. His mother worked nights in order to be with her children during the day. "She would put us to bed and be there when we woke up. We didn't realize she was working all night... It was a great sacrifice that they made. They are always my heroes."

Current difficulties in the church:

"This isn't the worst of times. It isn't the best of times. But we'll get through it and go into another wonderful adventure with God."