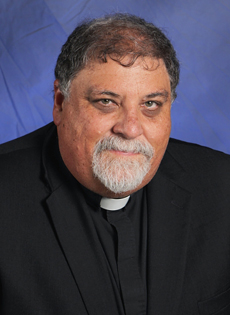 Born April 6, 1956 in GuantÃ¡namo, Cuba, Father Espino is the third of six brothers and sisters. He came to Miami in 1961 with a sister and older brother (now deceased) as part of the Pedro Pan program, which ultimately spirited more than 14,000 children out of Cuba. Father Espino lived with relatives in Brooklyn, N.Y., and Pennsylvania before being reunited with his parents on Valentineâs Day, 1966. Thatâs when I met my littlest sister, who was born two years after I left Cuba. The family moved near St. Benedict Parish in Hialeah, where he attended public schools. He entered the seminary in 1976 and was ordained a priest for the Archdiocese of Miami in 1983.

He has served at Corpus Christi in Miami, Sacred Heart in Homestead, St. Ann in Naranja, St. Martin de Porres in Leisure City, Holy Family in North Miami and as archdiocesan director of Encuentros Juveniles and Youth Ministry. From 1999 to 2004, he returned to GuantÃ¡namo, Cuba, to work as a missionary. In addition to his duties at Holy Rosary, he currently serves as archdiocesan liaison to Caritas Cuba.

He worked part-time and during the summer delivering newspapers, cleaning up in a pizza parlor, pumping gas, bagging groceries and making deliveries.

About a year-and-a-half after graduating from high school, while studying pre-med at Miami Dade College. "I had a conversion experience.I saw the need for priests."

"I always wanted to be a doctor or in medicine." He still keeps up with topics in bioethics.

"Being able to be present to people in moments of need.You can make a difference in peopleâs lives."

"Being open to the person that you have before you, being non-judgmental. We have a tendency to judge and to solve and give the correct answer right away. We just have to listen and walk with people."

"Thereâs no such thing as an ideal priest, in a sense.
The ideal priest is the man who is able to be comfortable with himself, transparent before God and others, and be there for others."

"I turn out much better than I should have."

"That priests are know-it-alls and solve-it-alls. Unfortunately, sometimes priests believe that."

"My brothers and sisters - they know me. Youâre never a prophet in your own home." One girlfriend told him his decision was "a waste of brains."

"The burden of the bills and the building fund and this whole reality that takes energy away from pastoral work." 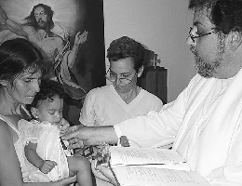 Father JosÃ© Espino spent five years as a missionary in his native GuantÃ¡namo, working mostly with people who were uncharted. Here, he baptizes a young child.

Postcards from GuantÃ¡namo: "I discovered eBay."

For his example of perseverance: Charles de Foucauld, "a strange priest who founded a community that nobody joined." Today, that would be the Little Brothers of Jesus Caritas.De Foucauld is also the inspiration behind a priestly fraternity, Jesus Caritas, to which Father Espino belongs.

"Not responding to Godâs will, and not con-fronting my fears."

Thing he is grateful for:

"Godâs grace working. I turned out much better than I should have."

Cooking: "In Cuba I cooked for myself for 5 years. My grandfather used to cook and my dad cooked. Itâs a way of relaxing."

On going to Cuba:

When he arrived, the newly-created Diocese of GuantÃ¡namo had five priests and two parishes. In five years, it grew to nine parishes and 12 priests and was on the verge of ordaining its first diocesan priest.