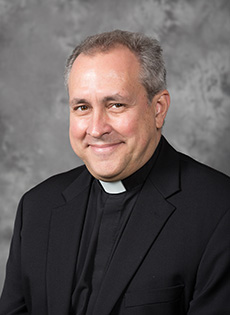 Born Nov. 11, 1960, in Havana, Cuba, Father Alvarez came to Miami with his parents and older sister in 1967. He grew up in St. John Bosco Parish, Little Havana, and entered the seminary at age 36. He was ordained for the Archdiocese of Miami on May 10, 2003. Before joining the seminary staff in September, 2004, he served as associate pastor of St. Brendan Parish in Westchester. He also hosts the Spanish and English language television programs produced by the archdiocese which air on Cable-TAP in Miami-Dade County.

He earned bachelorâs and masterâs degrees in theatre and spent a decade as an actor and director,doing theater, television commercials and films: âBlink-and-youâll-miss-me kind of things.â He then spent 15 years as a teacher and coach at his alma maters, Sts. Peter and Paul School and La Salle High School in Miami.

âWhen I had matured enough â¦ I dated enough that I could have married. I thought about it a couple of times. But I thought the lifestyle was too restricted. â¦ I always felt that I needed to be freer to engage in ministry. I would have driven my wife nuts.â

âMyself. Itâs funny, not too many people were surprised. â¦ At one time I had a girlfriend who would say to me, âStop talking to me with that priestâs voice of yours.ââ

âI havenât been too surprised by anything Iâve seen in ministry. I spent 10 years in the entertainment industry and worked with coaches. I was ready for anything.â

âI admire Jesus, the way he lived, the fact that he was a regular guy, a peopleâs man. He found joy and life in the little things and helped people discover that. â

âTheyâre all good. As long as you give me people, Iâm happy.â

âYou need to be a regular guy. â¦ What gives credibility to the faith is not what you do but how you relate to people. Jesus changed history not so much because of what he did but because of the way he related to the people who came to him. He showed them that within every ordinary event, the extraordinary was hidden there. Thatâs my whole spirituality, finding the extraordinary in the ordinary.â 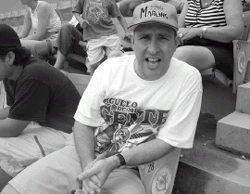 Father Alvarez, a âsports junkie,â takes in Marlins games whenever he can.

âThat a priest is a certain way. The best thing we bring to the priesthood is who we are, and weâre all so different.â

âShattering some of these very limited notions of what a priest is.â

On the âDrama and Ministryâ course he devised and teaches to seminarians:

âDrama and ministry are both centered on conflict. By studying drama, we become more attuned to the conflicts that we address in ministry.â

âIâm a huge sports fan, so on my days off, if the Marlins are playing, Iâm at the stadium.â

âIâm probably the only Cuban who listens to American folk and blue grass.â

âJesus. I admire Jesus, the way he lived, the fact that he was a regular guy, a peopleâs man. He found joy and life in the little things and helped people discover that.â

âAt the end of my life, not being as giving as I perhaps could have been. But Jesus is very merciful and he can be at peace with that, so I donât lose too much sleep over it. Iâll bank on his mercy.â

âWatching sports, music, movies. I love to travel. I love to eat.â

None. âAll the ladies come hug me, kiss me, and I send them home with somebody else. How could I have any regrets? I have the best of all worlds.â