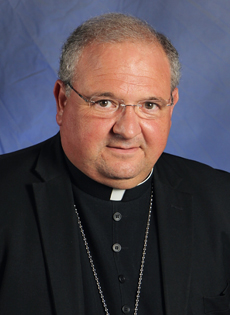 Born Dec. 5, 1960, in Sliema, Malta, Bishop Baldacchino is the second oldest of four children three boys and a girl born to Leonilda (known as Hilda) and Rinaldo (known as Rene) Baldacchino. When he was 13, his family joined the Neocatechumenal Way. He studied at St. Francis School in Msida and Mount Carmel College in Santa Venera, Malta, then studied science and chemistry at the University of Malta.

He entered the Redemptoris Mater Archdiocesan Missionary Seminary in Newark, N.J., in 1990, obtaining a bachelor's in theology, and a master's in divinity from Seton Hall University. On May 25, 1996, he was ordained a priest for the Archdiocese of Newark and assigned as parochial vicar to Our Lady of Mount Carmel in Ridgewood, N.J. In 1999, he was named chancellor of Our Lady of Divine Providence Mission in Turks and Caicos Islands, a missio sui iuris (independent mission) for which the Archbishop of Newark is responsible. He became pastor of Our Lady of Divine Providence Church in Providenciales in 2002, and in 2009 was named a Chaplain to His Holiness, with the honorary title of monsignor. Pope Francis appointed him auxiliary bishop of Miami Feb. 20, 2014.

He worked for nine years as a technical manager for Canada Dry in Malta. "I was a workaholic 36 hours straight work without going home."

"The World Youth Day in Santiago de Compostela in 1989. The words of John Paul II in his homily, 'Do not be afraid to be holy,' opened a new perspective to life for me."

"Comforting someone who has lost a loved one; when no words can fill that void and we can only offer to be present and share their suffering."

'The words of John Paul II in his homily, "Do not be afraid to be holy," opened a new perspective to life for me.'

"Preferisco Il Paradiso" based on the life of St. Philip Neri.

"Jesus of Nazareth: The Infancy Narratives" by Pope Benedict XVI.

"Blessed Pope John Paul II, because he changed my life and was instrumental in my calling to the priesthood." 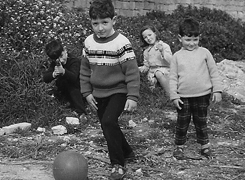 Peter Baldacchino, front, gets ready to kick a soccer ball while playing with his siblings, from left, John, Paula and Robert, in their native Malta. 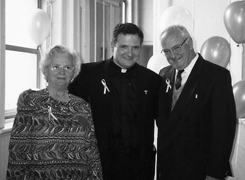 Newly ordained Father Peter Baldacchino is seen here with his parents Leonilda (known as Hilda) and Rinaldo (known as Rene).

"To be an instrument in God's hand in establishing a Catholic presence in the Turks and Caicos Islands."

"The day of my ordination to the priesthood."

"That my father's health prohibits him from attending my consecration (as bishop)."