Don't try to 'solve' the Trinity; enter into it 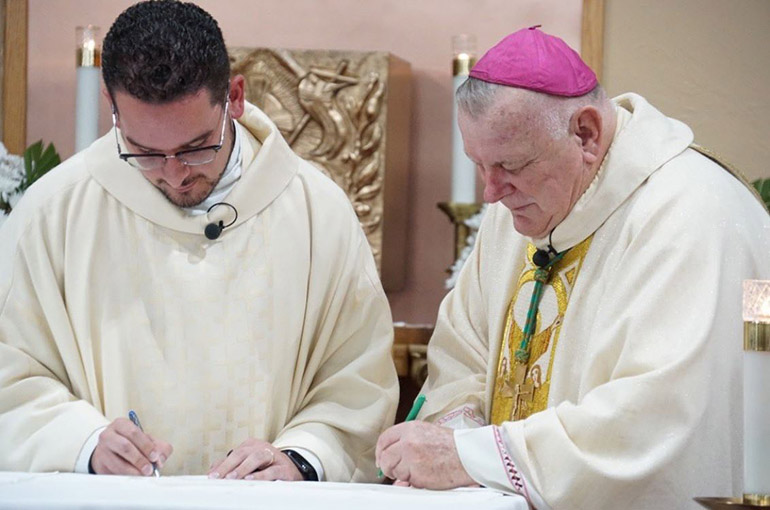 Archbishop Thomas Wenski preached this homily at the installation Mass for Father Bryan Garcia as pastor of St. Bernadette Parish in Hollywood. Father Garcia has served as administrator since the death of St. Bernadette’s longtime pastor, Father Brendan Dalton last year. The Mass was celebrated June 15, 2019, vigil of the solemnity of the Holy Trinity.

It’s great to be back at St. Bernadette’s. At the end of June, I will be traveling to Lourdes, where St. Bernadette saw the Blessed Virgin. I promise that I will pray for all of you.

But today, I come to give you a Father’s Day present. After a little more than a year as the administrator of this parish, I will officially “install” Father Bryan Garcia as your new pastor. When a priest is put in charge of a parish for the first time I usually name him an “administrator.” If he doesn’t mess up, I make him a pastor. New title, same pay. But Father Garcia has done more here than “not mess up.” He had big shoes to fill – coming in after Father Dalton. But I would say that he’s earned your trust and won your love. So, Happy Father’s Day! 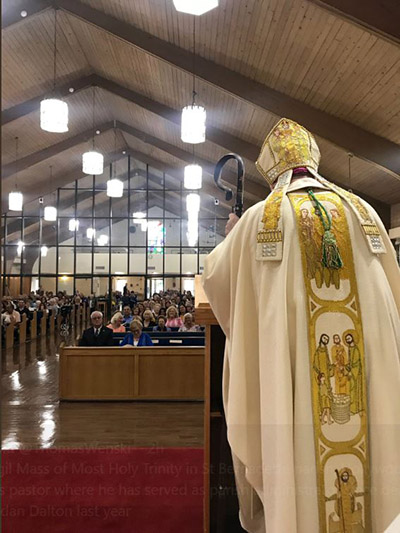 Archbishop Thomas Wenski preaches the homily during the Mass where he installed Father Bryan Garcia as pastor of St. Bernadette Parish in Hollywood, June 15, 2019.

Father Bryan will be a good father to you all. Of course, that doesn’t mean he’s always going to please everybody. Anyone who tries to please everybody will end up pleasing no one. Being the father of a parish is like being the father of a family. It’s not a “popularity” contest. Bryan – and you, fathers out there – remember, always seek to please the Lord in all things. If you do that, the rest will take care of itself.

Today, the Church also celebrates the Solemnity of the Most Holy Trinity: The Mystery that is God himself – One God in three divine persons: Father, Son and Holy Spirit. How God is one and three and how Jesus is both human and divine were not Christian attempts to complicate the simple divine reality but to bear witness to the truth of God who came to dwell among them, who gave his life for them and who remained in their midst. At any rate, the Holy Trinity is not a “problem” to be reckoned with; it is a mystery to be entered into.

And so doctrinal formulations about the Holy Trinity – like the Nicene Creed we recite every Sunday at Holy Mass – were not creative inventions of the early Church. Rather, the theologians and bishops of the early Church, using the categories of Greek philosophy, were trying to faithfully express the inexpressible mystery of God as experienced in the Church of Jesus Christ.

They were saying: This is who God is – because this is how they experienced the grace of the Lord Jesus Christ, the love of God and the communion of the Holy Spirit.

While the “how” of all that remains a mystery to us, it is not so mysterious that we cannot live with each other in a reality of life that reflects and shares in the reality of God’s life. In fact, our families – father, mother and children – are like icons of the Holy Trinity: The unity of the family is love – a love that does not smother or stifle the other but enables the other to grow and flourish; it is a love that is enriched by and enriches the other. It is a unity in diversity, a diversity that doesn’t threaten but complements the other.

On this feast of the Holy Trinity, we remember that God made us to share in his life – we are called to union with the Father, through his Son, Jesus Christ – God made visible to us – in the gift of his Holy Spirit through whom we have become sons and daughters of the Father and brothers and sisters of the Lord.

Knowing Jesus Christ by faith is our joy, following him is a grace and passing on this treasure to others is a commission that the Lord has entrusted to each one of us in calling and in choosing us in our baptism.

I pray you, parishioners of St. Bernadette, under the leadership of your pastor, Fr. Bryan Garcia – your commitment to your Catholic faith will be for you a joy, a grace, a treasure received and shared.

Other News from St. Bernadette Church

Friday, 5 Jan 2018
'Nothing he did was about himself, it was always about the Lord'