Africa: A continent of hope for the Church 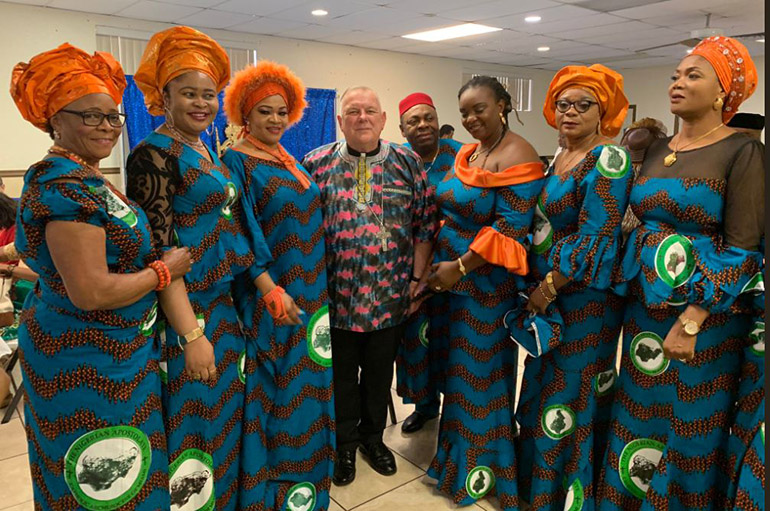 Wearing traditional garb, Archbishop Thomas Wenski poses with some of the members of the Nigerian Apostolate here after the Mass to mark its 25th anniversary in the archdiocese, June 16, 2019.

Archbishop Thomas Wenski preached this homily at a 25th anniversary Mass for the creation of the Nigerian Apostolate in the Archdiocese of Miami. The Mass was celebrated June 16, 2019, at St. Monica Church, Miami Gardens.

Today, the Church celebrates the Solemnity of the Most Holy Trinity: The Mystery that is God himself – One God in three divine persons: Father, Son and Holy Spirit. How God is one and three and how Jesus is both human and divine were not Christian attempts to complicate the simple divine reality but to bear witness to the truth of God who came to dwell among them, who gave his life for them and who remained in their midst.

And so doctrinal formulations about the Holy Trinity – like the Nicene Creed we recite every Sunday at Holy Mass – were not creative inventions of the early Church. Rather the theologians and bishops of the early Church, using the categories of Greek philosophy, were trying to faithfully express the inexpressible mystery of God as experienced in the Church of Jesus Christ.

They were saying: This is who God is – because this is how they experienced the grace of the Lord Jesus Christ, the love of God and the communion of the Holy Spirit.

At any rate, the Holy Trinity is not a “problem” to be reckoned with; it is a mystery to be entered into. In other words, we are to approach this mystery – the mystery of God in the intimacy of his own being – not so much through our heads but through our hearts.

So, while the “how” of all that remains a mystery to us, it is not so mysterious that we cannot live with each other in a reality of life that reflects and shares in the reality of God’s life.

For God is all about love; in fact, God is love. So, when we live in love we live in God, and God lives in us. Living in love, however, does not mean we must be the same.

In fact, our families – father, mother and children – are like icons of the Holy Trinity: The unity of the family is love – a love that does not smother or stifle the other but enables the other to grow and flourish; it is a love that is enriched by and enriches the other. It is a unity in diversity, a diversity that doesn’t threaten but complements the other.

To the Nigerian community here in South Florida, I congratulate you on this 25th anniversary of the Nigerian/African Apostolate here in the Archdiocese of Miami. The Nigerian community here may be smaller than the community in Houston or Atlanta, but you have made great contributions here to the Church and the larger community. Five of your priests are pastors in our Archdiocese! Other priests and your sisters serve in our health care facilities. Each one of you are members of our parishes – and through your Catholic faith you work to make our communities better places and thus build up the Kingdom of God.

The vitality of the still young faith of many Africans, and of many Nigerians in particular, is seen in the explosion of religious and priestly vocations. A continent that was receiving missionaries a little more than a generation ago is now sending missionaries throughout the world.

Africa in this sense is a continent of hope for the Church and for the world. And yet, Africa is a continent on the brink of despair. While both Catholic and Protestant missionaries accompanied the colonial powers and brought the Gospel to the “Dark Continent,” the legacy of colonialism has seemingly bequeathed a future of continued violence and poverty.

Pope Benedict XVI once spoke of this sad legacy of colonialism. He said, “Instead of giving them their God, the God that is close to us in Christ, and welcome from their traditions all that is dear and great ... we brought them the cynicism of a world without God, in which only power and profit mattersÃ¢â¬Â¦We have destroyed the moral criteria, so that corruption and a desire for power without scruples becomes something obvious.”

Globalization of the world’s economy has resulted in the plunder of a continent rich in human and material resources. The negative effects of such a globalization will only be reversed by, in the words of John Paul II, “the globalization of solidarity.”

In that sense, this solemnity of the Holy Trinity calls each of us to live in solidarity, that is, to a greater fellowship, or communion, in the Spirit, so that through Christ, we may be one with the Father and give him all glory and honor.

To live in God, that is to live a God-like life, we must forgive rather than condemn. We must build up and affirm rather than tear down. We must see the best, not the worst. We must be self-sacrificial and not self-centered. We must be giving rather than grasping. We must offer hope, not despair. We must heal rather than wound.

On this feast of the Holy Trinity, we remember that God made us to share in his life – we are called to union with the Father, through his Son, Jesus Christ – God made visible to us – in the gift of his Holy Spirit through whom we have become sons and daughters of the Father and brothers and sisters of the Lord.

I thank you for all that you do. As Catholics whose faith was born in Africa, may you make up a community of faith that is both reconciling and reconciled.

For knowing Jesus Christ by faith is our joy, following him is a grace, and passing on this treasure to others is a commission that the Lord has entrusted to each one of us in calling and in choosing us in our baptism. May we share the love of the Most Holy Trinity with all, for what the world hungers for is not a new argument about the Trinity but the experience of a God who loves us.

Wearing traditional garb, Archbishop Thomas Wenski poses with some of the members of the Nigerian Apostolate here after the Mass to mark its 25th anniversary in the archdiocese, June 16, 2019.

Other News from St. Monica Church