Got a text from your pastor? Don't give!

Also on Google Hangouts: A message purportedly sent by Auxiliary Bishop Peter Baldacchino, pastor of St. Kieran in Miami, to one of his parishioners.

This article originally appeared in April 2019. It is being re-posted as new reports come in of parishioners in the Archdiocese of Miami beginning to once again receive these texts or emails.

MIAMI | If your pastor texts or emails you asking for money or a gift card, saying it’s an emergency, don’t give. It’s not your pastor. It’s a scam.

It’s happened to several South Florida pastors but it’s not just a local problem. The Diocese of Austin, Texas, also reported the scam, and the Texas attorney general issued a consumer alert about it. The alert said the scammers are probably using information found on church websites or in church online bulletins to trick church members into parting with their cash. 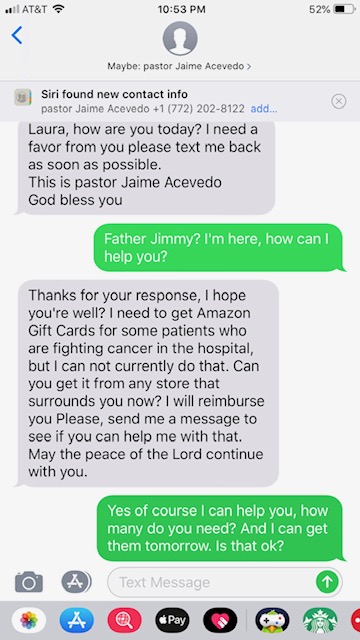 Image of a scam: Text message purportedly sent by Father Jaime Acevedo, pastor of St. Mark in Southwest Ranches, to one of his parishioners.

“I would never ask anyone for money by text or email for any reason,” said Father Jaime Acevedo, pastor of St. Mark Church in Southwest Ranches. “Requests for money are done (only) through collections approved by the archdiocese.”

One of his parishioners received a text, purportedly from him, asking for “Amazon gift cards for some patients who are fighting cancer in the hospital.”

But the text did not come from the priest’s cell phone or parish number, and the fact that the scammer referred to “pastor Jaime Acevedo” might have been another clue it was a scam. Catholic priests don’t normally refer to themselves that way.

Father Acevedo sent a screenshot of the text to Sister Elizabeth Worley, archdiocesan chancellor for administration, to make the archdiocese aware of the problem. He also sent an email to all his ministry heads “to advise them not to respond,” he said.

Similar announcements were made at St. Kieran Church in Miami, Our Lady of the Lakes in Miami Lakes and Prince of Peace in Miami.

“These scams are going around like the measles,” said Sister Elizabeth, a member of the Sisters of St. Joseph of St. Augustine. “Several parishes have been afflicted. Some very smart people have fallen for them because it seems to be their pastor making the request. They come by text or by e-mail and include a request for gift cards (iTunes, Amazon, or whatever) or cash.”

She urged that information about the scam be shared with “as many of your parishioners and friends as you can.”

This scam is probably a variation on others: texts and robocalls purportedly from the IRS threatening the recipient with jail time and fines for not paying back taxes, or from utilities threatening to cut off electricity or phone service for non-payment.

The Texas attorney general’s website posted “5 Signs of a Scam” (see below) to help people avoid falling victim to the scammers. It said, “If you spot any of these tactics, stop and walk away. You're probably being scammed.”

In Florida, scams can be reported to the office of Attorney General Ashley Moody by filling out a form at http://myfloridalegal.com, or calling the Fraud Hotline, 1-866-966-7226.

5 signs of a scam

These tips are taken from the website of the Texas state attorney general: