WASHINGTON, D.C. | The Supreme Court has overturned Roe v. Wade in a historic decision released Friday that brings a sudden and dramatic end to nearly a half-century of nationwide legalized abortion in the U.S. The opinion, in the Mississippi abortion case Dobbs v. Jackson Women’s Health Organization, is widely seen as the Supreme Court’s most highly anticipated and consequential ruling since Roe. It not only overturns Roe, the landmark 1973 abortion case, but also Casey v. Planned Parenthood, a 1992 decision that affirmed Roe.

"Abortion presents a profound moral question. The Constitution does not prohibit the citizens of each State from regulating or prohibiting abortion. Roe and Casey arrogated that authority," the opinion states. "We now overrule these decisions and return that authority to the people and their elected representatives." 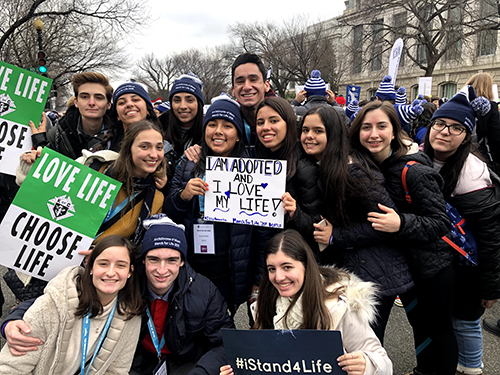 March for Life pilgrims from the Archdiocese of Miami pose with their signs at the start of the March for Life, Jan. 24, 2020. The Supreme Court's June 24, 2022 ruling on Dobbs vs Jackson Women's Health marks a watershed moment for the Catholic Church and the wider pro-life movement in the United States, which have painstakingly sought Roe v Wade’s reversal since the landmark 7-2 decision was handed down on Jan. 19, 1973.

The decision does not ban or criminalize abortion, nor does it recognize an unborn child's constitutional right to life. But in one, breathtaking stroke, the court’s action sweeps away entrenched legal barriers, created and strictly enforced by the federal judiciary, that for decades have blocked states like Mississippi from heavily restricting or prohibiting the killing of unborn children in the womb.

In the process, the decision ushers in a new era of abortion politics in the U.S., with the battleground now shifting to state legislatures. Those democratically elected bodies are now free to debate and regulate abortion as they see fit, as happened throughout American history before the Supreme Court federalized the issue.

At the same time, the ruling marks a watershed moment for the Catholic Church and the wider pro-life movement in the United States, which have painstakingly sought Roe’s reversal since the landmark 7-2 decision was handed down on Jan. 19, 1973.

The outcome of Dobbs came as little surprise, since the final opinion substantially resembled a draft written by Alito in February that was leaked to the press on May 2.

In Roe v. Wade, the court ruled that states could not ban abortion before viability, which the court determined to be 24 to 28 weeks into pregnancy. Nearly 20 years later, the court upheld Roe in Planned Parenthood v. Casey. The 1992 ruling said that while states could regulate pre-viability abortions, they could not enforce an “undue burden,” defined by the court as “a substantial obstacle in the path of a woman seeking an abortion of a nonviable fetus.”

Mississippi’s Gestational Age Act, the subject of the Dobbs case, directly challenged both decisions, because it bans abortion after 15 weeks, well before the point of viability.

"Roe was egregiously wrong from the start. Its reasoning was exceptionally weak, and the decision has had damaging consequences. And far from bringing about a national settlement of the abortion issue, Roe and Casey have inflamed debate and deepened division," the opinion states. "It is time to heed the Constitution and return the issue of abortion to the people's elected representatives."

Florida's Conference of Catholic Bishops issued a statement saying they "are deeply heartened" by the "landmark ruling," which will mark "a new era for the work of the Church and all those who strive to protect children in the womb. We remain committed to ministries of service that accompany expectant mothers facing difficult or unintended pregnancies. We strive to continue to build a society that empowers women so that mothers are truly supported throughout pregnancy and beyond. A truly pro-life culture values women for their unique contributions and special gifts in all spheres of life, while supporting them in their roles as mothers. We wholeheartedly promote the U.S. Conference of Catholic Bishops’ initiative Walking with Moms in Need as well as the Florida Pregnancy Care Network to provide life-affirming care for women."

The U.S. bishops, in their statement, called this "a historic day in the life of our country, one that stirs our thoughts, emotions and prayers."

Their statement continued: “America was founded on the truth that all men and women are created equal, with God-given rights to life, liberty, and the pursuit of happiness. This truth was grievously denied by the U.S. Supreme Court’s Roe v. Wade ruling, which legalized and normalized the taking of innocent human life. We thank God today that the Court has now overturned this decision. We pray that our elected officials will now enact laws and policies that promote and protect the most vulnerable among us."

They also pledged "to begin the work of building a post-Roe America. It is a time for healing wounds and repairing social divisions; it is a time for reasoned reflection and civil dialogue, and for coming together to build a society and economy that supports marriages and families, and where every woman has the support and resources she needs to bring her child into this world in love."