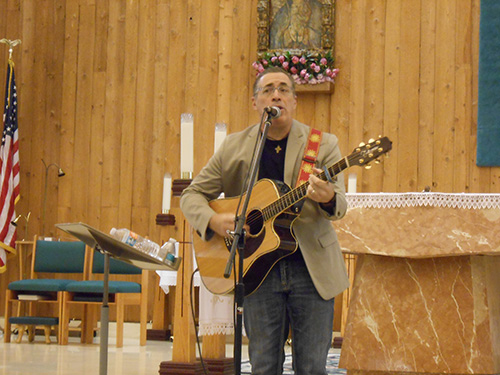 Steve Angrisano, a Catholic singer and songwriter, delivers a powerful message of healing through song and testimony. A resident of Littleton, Colorado, he sang at the funerals of three of the Columbine victims.

CORAL SPRINGS | It’s been a little over nine months since 17 students and teachers died in a terrible shooting at Marjory Stoneman Douglas High School. But the day remains fresh in the minds of many of the residents of Coral Springs and Parkland.

To offer continuing spiritual support to the community, Msgr. Michael Souckar, pastor of St. Andrew Church in Coral Springs, brought singer and songwriter Steve Angrisano for a family concert Nov. 16, and to lead a retreat for high school students the next day.

“Steve Angrisano is just what this community needed on the ninth month since the Douglas tragedy,” said St. Andrew’s Youth4Christ minister Belinda Castaneda. “He is a great storyteller and exceptional musician, but beyond that he has a special insight and empathy for our community, having lived through the Columbine tragedy in his hometown.”

Angrisano was a youth minister in Littleton, Colorado, not far from Columbine High School, and he sang at the funeral of three of the victims of that horrific school shooting in 1999. 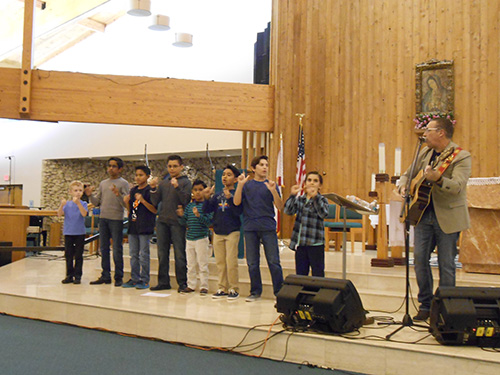 Steve Angrisano invites young people to join him in leading attendees with hand movements to the song, "Trading my Sorrows," during his concert Nov. 16 at St. Andrew Church in Coral Springs.

Castaneda noted that healing and recovery from any tragedy, whether a horrific event like Parkland or simply the loss of a family member, takes time and work.

“Everyone mourns and grieves in their own way, but that doesn’t mean we have to do it alone,” she said. “We need to continue to support our community through events like Steve’s concert and retreat, but every day in every way, doing small things for each other with great love.”

James Rocco, a parishioner of St. Andrew since 2003, said, “Steve was amazing, and he had a very powerful testimony that I will carry forever.”

“He was lovely, touching and funny,” said Carolyn Carey. “He was a wonderful storyteller. He had a hopeful and uplifting message.”

Msgr. Souckar noted that the Sunday after the shooting, St. Andrew hosted a prayer vigil with adoration of the Blessed Sacrament. “Many parishioners, including students and faculty from MSD High School, were present for that time of faith, prayer, hope and solidarity.”

In the weeks and months following, he has spoken to the students in St. Andrew School and the religious education classes.

St. Andrew School Principal Kristen Hughes said “the trauma continues to haunt our community but on a more positive note, the children are always hopeful and hold everyone in prayer.”

Jenn D’Angelo Lucovic, youth minister at St. Elizabeth Ann Seton Parish in Coral Springs, has been a rock of support to the teens in her youth group, who lost two members of their community in the shooting: Cara Loughran and Gina Montalto.

“Gina’s smile would light up any room. She had the brightest spirit and was so full of joy,” D’Angelo Lucovic said.

Loughran was a peer minister in the religious education program. Lucas Finney, a teen in the St. Elizabeth Ann Seton youth group and a student at Coral Glades High, taught a class with her on Monday nights.

“The last thing she ever said to me was, ‘Are you ok?’ because I wasn’t in the best mood. She was so sweet and kind, even though I annoyed her sometimes. I miss her,” Finney said. 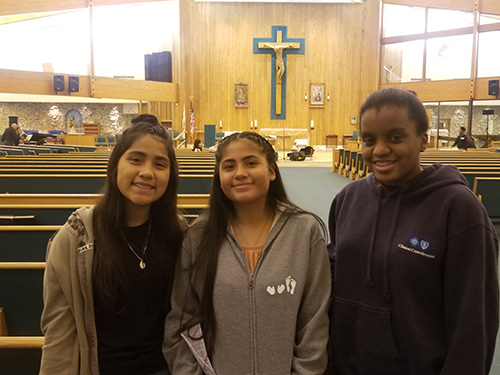 D’Angelo Lucovic said she received “incredible support” in the form of prayers, handwritten cards and letters, and spiritual bouquets from youth ministers and youth groups from all over the U.S., Australia, Ireland and several other countries. That showed her teens the “bigger” Church and was one of the things that helped them get through the year.

“It meant a lot to my teens. They read every one,” D’Angelo Lucovic said.

She noted that the youth group’s “hangout afternoons” on Mondays and Tuesdays, established well before the tragedy, came in especially handy when the teens from Stoneman Douglas were out of school for three weeks after the shooting.

Chloe Dupuy, another teen in St. Elizabeth Ann Seton’s youth group, said what helped her cope this past year was “being around those who I love as well as friends and family who have my back. Also, youth group was a great way to cope because they are like a second family.”

She added: “That terrible day made me realize that tomorrow isn’t guaranteed and that you have to love and forgive because you never know if you are going to see them the next day.” 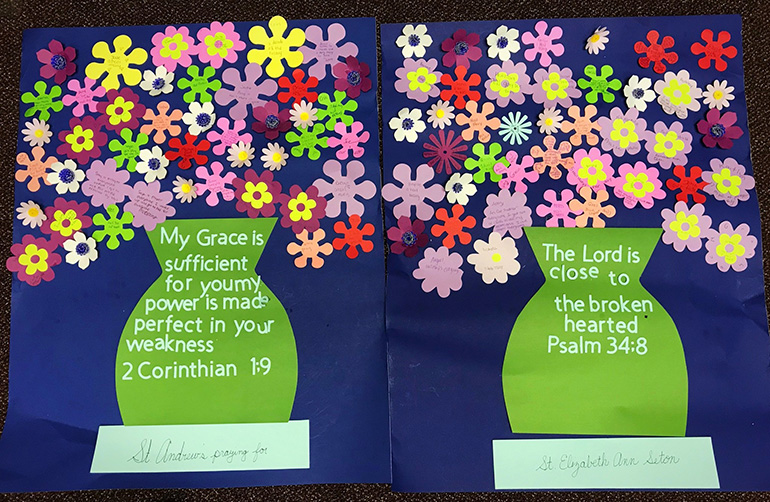 This spiritual bouquet says, "St. Andrew praying for St. Elizabeth Ann Seton." St. Andrew is a church and youth group located only one hour away from Sandy Hook in Newtown, Connecticut. The youth minister there sent this to St. Elizabeth after the Parkland shooting, along with various prayer cards and medals.