'Small in number, mighty in faith' 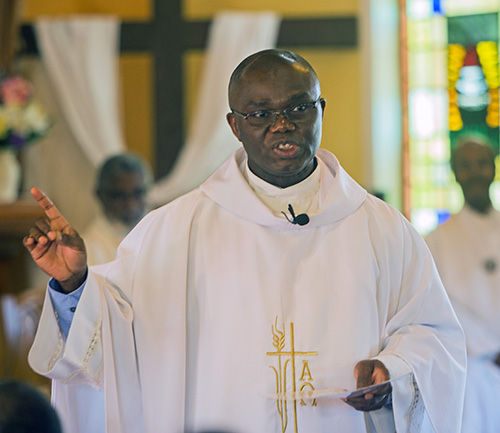 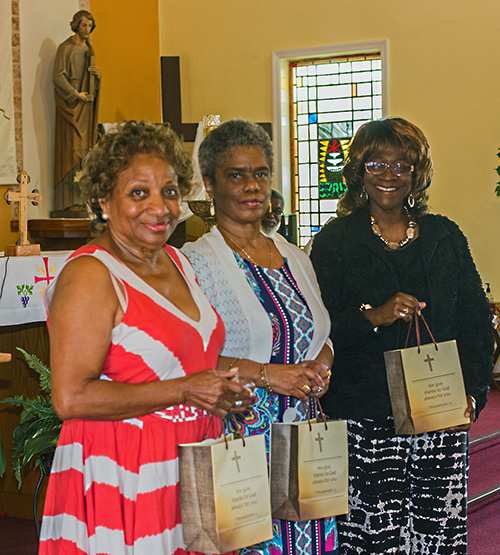 From left, Teresa Davis, Andrea Patterson and Constance Thornton hold the gifts given to them for their service to St. Philp Neri Church on the day the parish celebrated its 65th anniversary, May 26, 2019.

MIAMI GARDENS | After a Mass celebrating their church’s 65th anniversary, parishioners of St. Philip Neri posed for a group photograph around the altar of the small Miami Gardens Church. The group included members of the 150 families who attend the 9 a.m. Sunday Mass, the only Sunday Mass at the church. It seemed like a large family reunion.

“We are small in number, but mighty and united in our faith,” said Lona Bethel Matthews, church historian, who put together a 40-page 65th anniversary booklet called “We Have Come This Far By Faith.” It details the church’s origins to the present day and includes photographs.

The church began in 1951 as an outreach mission of St. Francis Xavier, Miami’s first all-black Catholic church. At first, Masses were celebrated in a vacant Bunche Park Shopping Center storefront and in private homes.

“People who gathered for a Mass weren’t sure that a priest would show up,” said Matthews. 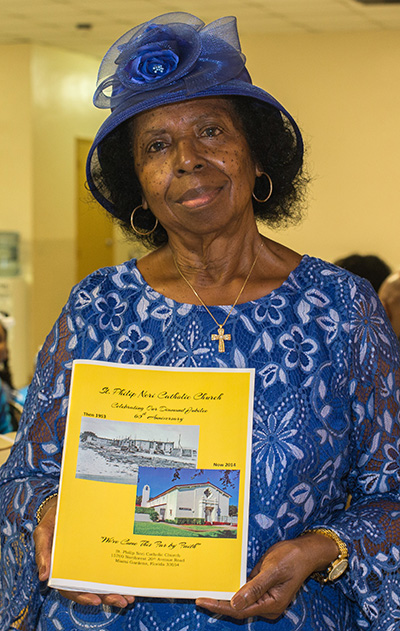 Lona B. Matthews holds the 47-page St. Philip Neri history booklet which she put together. 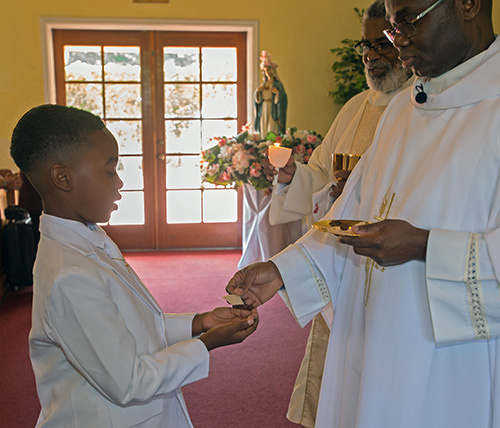 In 1954, Archbishop Joseph Hurley blessed the current Spanish-style building with its distinctive bell tower and named it St. Philip Neri Church. Many of the original families are still represented at the close-knit parish.

Additions to the church facility included a rectory and parish hall/day care center where religion classes were taught. In 1980, the Guardian Angel Day Care Center and kindergarten were established. In 1987, St. Philip Neri’s pastor, Father Kenneth Whittaker (now at Our Lady of Mercy in Deerfield Beach), invited the Sisters of St. Joseph Benedict Cottolengo from the nearby Marian Center to adopt the parish. They mainly provided religious education to the children of the parish.

In 2009, faced with financial challenges, St. Philip Neri became one of several churches closed by the Archdiocese of Miami. Heartbroken parishioners fought for two years to reopen the church. They wrote letters and sent petitions to the archbishop. Hoping for a miracle, a group of parishioners walked around the church seven times and prayed following the example of the prophet, Joshua, who led the Israelites in the conquest of Jericho.

“In 2011, we got our miracle,” said Matthews. “Archbishop Thomas Wenski said that our church was going to be re-opened.”

He re-consecrated St. Philip Neri Church Oct. 1, 2011, and announced that Msgr. Chanel Jeanty — archdiocesan chancellor for canonical affairs and now pastor of St. James in North Miami — would be its new pastor.

Parishioners were glad to come back home, said Katrenia Reeves Jackman, whose mother was a founding member of the church in 1951.

“There wasn’t a Catholic presence in this area for two years,” said Reeves Jackman, director of the archdiocesan Office for Black Catholic Ministry. “We never gave up on our church.”

“Today, we celebrated the 65th year of St. Philip Neri Church,” said Father Fidelis Nwankwo, parish administrator since April 2017. “Like our patron, St. Philip Neri, this church has had many challenges.”

Also during the 65th anniversary Mass, parishioners presented Father Nwankwo with a plaque commemorating his 25 years as a priest. One of the church’s youngest members, Jaron Johnson, Jr., 8, received his first Holy Communion. And the congregation paid tribute to their patron, St. Philip Neri, on his feast day, May 26, by reading a prayer in his honor. 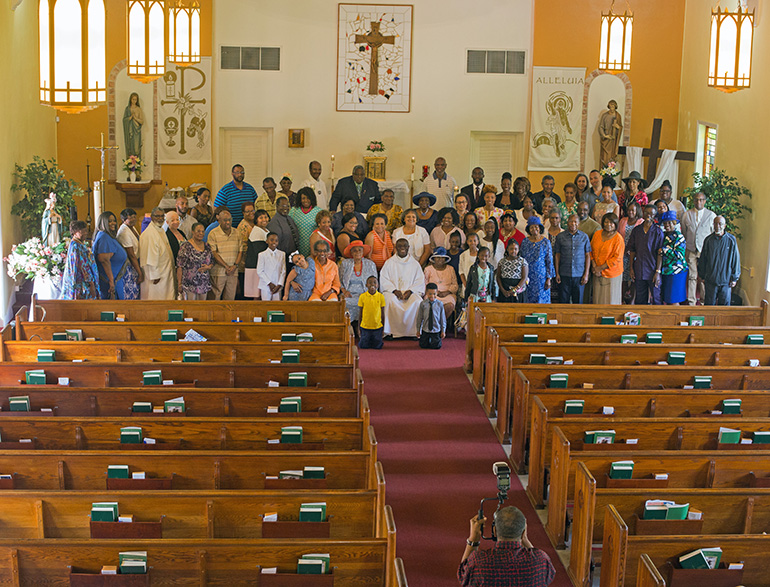 Monday, 4 Nov 2019
Our encounter with Jesus at Mass should change us