ST. AUGUSTINE, Florida | Funeral services will take place Tuesday and Wednesday, Nov. 28, at the Sisters of St. Joseph Motherhouse Chapel here for Sister Mary David Magee, who died Nov. 22 at the age of 87, after 69 years of religious life and service throughout Florida.

Sister Mary David began her ministry in 1951 at St. Mary School (now the cathedral school) in Miami, and throughout the next 12 years served in elementary schools in St. Petersburg, St. Augustine, Jacksonville and Tampa. 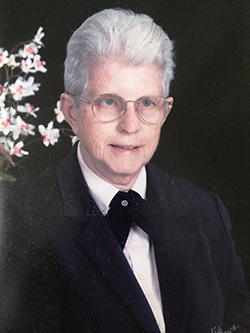 In 1963, she opened the Christ Child Center, an orphanage in Tampa. Afterward, she worked in social and catechetical ministry to migrants in the Spanish Missions in the Palm Beach area.

From 1993 to 1996, Sister Mary David served as site manager at the Senior Center for the elderly in Miami Shores, an outreach of Catholic Community Services (now Catholic Charities). In late 1996, she began her ministry at St. Stephen School and Parish in Miramar, serving as principal, assistant principal, resource teacher and parish volunteer. She retired to Our Lady of Lourdes Convent in St. Augustine in 2013.

Born Barbara Jean Magee in Summerville, Massachusetts, Oct. 2, 1931, Sister Mary David was the fourth child in a family of four girls and one boy. When her mother died in 1936, her father moved the family to Orlando. Eventually, he remarried and gave Sister Mary David four more brothers. One of them became a priest, Father Robert Magee, who died in 2005.

She received her Bachelor of Science degree from Barry College (now university), in Miami Shores, and her master’s degree in school administration from the University of Dayton, Ohio.

Sister Mary David would use these degrees to assist her in various ministries throughout the state. She frequently prayed for good health and strength to carry out the philosophy found in one of her favorite quotations: “God grant me the serenity to accept the things I cannot change, the courage to change the things I can, and the wisdom to know the difference.”