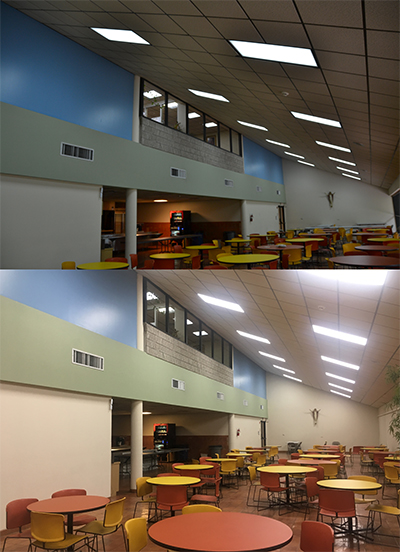 Before (above) and after photos of the Pastoral Center cafeteria, before and after the installation of LED lights. 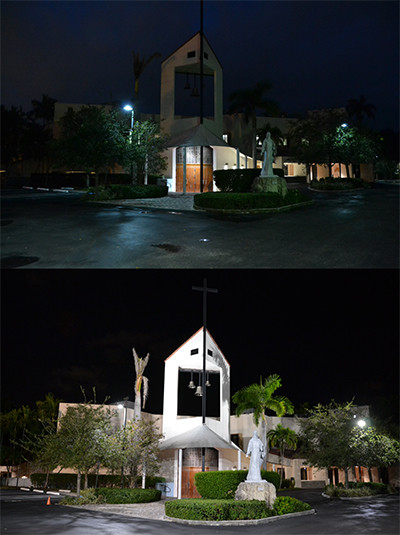 Before (above) and after photos of St. Martha Church's entrance, before and after the installation of LED lights. 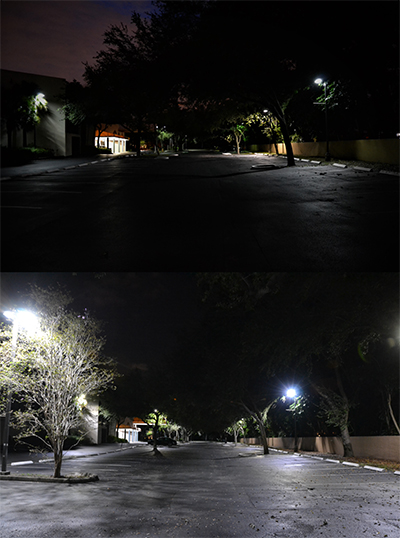 Before (above) and after photos of the Pastoral Center parking lot, before and after the installation of LED lights.

MIAMI | Proving that it’s not just a matter of reading nice words from a papal document on protecting the environment, area parishes, schools and the archdiocesan Pastoral Center are getting more energy efficient.

Inspired by Laudato Si', Pope Francis’ encyclical on the environment and ecology, South Florida Catholic facilities are tapping into more efficient LED lighting and updated cooling systems for heavily used meeting spaces, including a number of key interior and exterior spaces at the Pastoral Center in Miami Shores.

The new lighting systems are expected to increase energy savings by anywhere between 60 and 80 percent in those areas, although it is still too early to point out the exact cost benefits following installation, according to David Prada, who oversees the archdiocese’s Building and Properties Office.

In addition, the new lighting systems have a long lifespan, and are expected to improve luminosity and light quality over the aging fluorescent and incandescent systems. They come with 36 and 60-month service contracts, Prada noted.

“It is a technology that has been evolving and that we have been watching, and wanting to be good stewards of our environment, we have been looking for opportunities to implement that technology throughout the archdiocese,” Prada told The Florida Catholic.

He said early on there had been some problematic LED products on the market but that 2017 was a good time to take advantage of the popular new lighting.

“In addition to being more efficient, LED has several aesthetic benefits such as a more modern, and clean look, with none of the flicker that you sometimes associate with fluorescent lights, and which have been attributed to side effects such as headaches,” he said.

The lighting installation was completed in early August and should start showing cost savings within the next few billing cycles, Prada added.

In addition, many of the area Catholic and archdiocesan schools and parishes have already started changing out their fixtures to LED, including all new parish building projects, as well as spaces at St. Thomas the Apostle Parish, Archbishop Coleman F. Carroll High School, St. Rose of Lima School, Epiphany Church and School, Lourdes Academy, St. Martha Parish in Miami Shores, Archbishop Edward A. McCarthy High School in Southwest Ranches and St. Brendan High School in Miami.

“Many of our parishes are also upgrading air conditioning units so they are of higher efficiency, and adding programmable controls and thermostats, because with the old fashioned manual thermostats it was easy to forget to change settings and leave them needlessly running,” Prada said.

Correction: The name of the lighting company that is working with the archdiocese was shortened in the original version of this story. The full name is GO+ Lighting Service by Itelecom USA.