Pope prays for just and fraternal society in Cuba

VATICAN | Pope Francis called on Sunday for peace and dialogue in Cuba after unprecedented, nationwide protests rocked the communist-run country.

Speaking July 18 after the Angelus prayer in the Vatican, in his first appearance since being discharged from the hospital after colon surgery, the pope said, “I am also close to the dear people of Cuba in these difficult times, in particular to those families suffering the most."

The pope said he is praying that “the Lord might help the nation construct a society that is more and more just and fraternal through peace, dialogue and solidarity.” 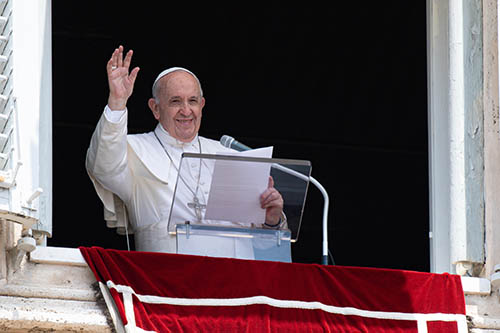 Pope Francis leads the Angelus in St. Peter's Square on July 4, 2021, before being hospitalized for colon surgery. After being released from the hospital July 14, he made his first public appearance at the Vatican for the Angelus on July 18.

“I urge all Cubans to entrust themselves to the maternal protection of the Virgin Mary of Charity of Cobre. She will accompany them on this journey,” he said.

On July 11, Cuba erupted in some of the worst unrest seen in the country in decades, with protesters in dozens of locations calling for “freedom.” The anti-government protests began with a demonstration in Havana that soon spread throughout the country. Dozens have been arrested nationwide and authorities confirmed that one person had died amid the protests, which are rare in the communist-run country.

According to Reuters, “the latest tally from exiled rights group Cubalex put those detained at 450, although some have since been released. Activists have accused authorities of repression as some videos have emerged on social media of police beating protesters.”

The demonstrations were sparked by the citizens’ discontent over shortages of basic goods, violation of civil liberties, electricity outages and the government’s poor handling of the COVID-19 pandemic. All these hardships have been further exacerbated by a U.S. trade embargo on Cuba which was tightened under the Trump administration.

On July 17, pro-government forces, including both President Miguel Díaz-Canel and his 90-year-old predecessor, Raúl Castro, took to the streets in Havana with rallies of supporters to uphold government. The president accused the U.S. trade embargo on the island nation for poverty and social injustice and international media for spreading what he called “malicious interpretation” of the latest events.

Yet following the protests, authorities in Cuba temporarily lifted restrictions on food, medicine and other essentials in the government’s first apparent concession to the days of unrest and protests. Beginning July 19 until the end of the year, travelers arriving in the country will be able to bring these items without having to pay a customs fee, the government said.

Making the announcement via a televised address, Prime Minister Manuel Marrero, alongside President Diaz-Canel said that the change was “a demand made by many travelers and it was necessary to take this decision.”

Before this latest change, travelers were only allowed to bring in up to 10kgs (22 pounds) of medicine tax-free under Cuban law. They are also permitted limited amounts of food and personal hygiene goods but must pay customs duties.

THE EMBARGO: A FACTCHECK

Although Cuba claims the U.S. embargo — or as they call it, the U.S. "blockade" — means the island nation can't trade with any country or company, a USA Today factcheck called this “FALSE, based on our research. The embargo prevents most American companies from doing business with Cuba and vice versa. Although the embargo creates disincentives for other countries and companies to trade with Cuba, it does not compel them to cut economic ties with the island nation. Many countries, as well as some American companies, do business in Cuba.” 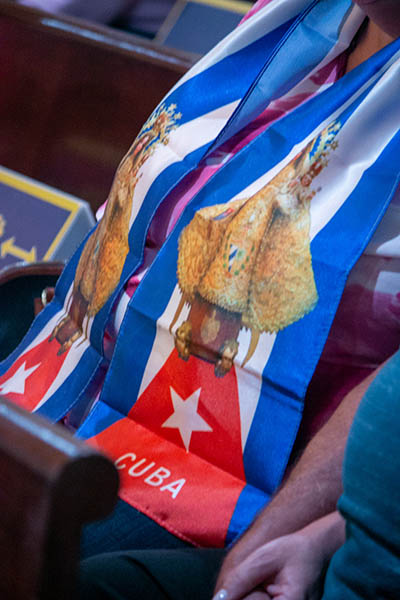 In fact, Cuba has been a member of the World Trade Organization since 1995. The European Union is Cuba's largest trading partner, and the United States is the fifth-largest exporter to Cuba (6.6% of Cuba's imports come from the U.S.). Cuba must, however, pay cash for all imports, as credit is not allowed. (See more details here.)

Both the U.S. and Cuban bishops, as well as the Vatican, have spoken out consistently against the U.S. embargo, noting it harms the Cuban people, not the government.

Separately, the bishops of Cuba issued a statement July 12, expressing their concern that the response to the requests made by Cubans is immobility that serves to give continuity to the problems, without solving them.

“Not only do we see that situations get worse,” the bishops said, “but we are also moving towards a rigidity and hardening of positions that could generate negative responses, with unpredictable consequences, that would harm us all.”

In the face of this, they urged that “a positive solution is not reached with impositions, nor by invoking confrontation” but rather through mutual listening by which common agreements are sought and concrete steps are taken that contribute to the good of all.

The bishops further invited everyone “not to favor the crisis situation, but with serenity of mind and good will, to exercise listening, understanding and an attitude of tolerance, which takes into account and respects the other, to seek together fair and adequate solutions.”

In the same vein, the Cuban Conference of Religious (CONCUR) have called on authorities to recognize that those who took to the streets are not criminals but are rather “ordinary people in our cities who have found a way to express their discontent.

“As consecrated persons, we live these events from the perspective of faith, and we also recognize the voice of God in those demands of the people.”

CONCUR went on to propose several points that could help overcome the situation. They called for the defense of the legitimate and universal right of citizens to manifest in an orderly and peaceful manner in public spaces; the prompt release of all those who have been unjustly imprisoned; the right to information and communication that has been violated by interrupting the connection of mobile phones and blocking social networks.

The Cuban religious also warned against falling into the trap of violence as a way of imposing “our own truth”; and invited all to listen to each other to remedy the causes that gave rise to the protests.

Hope Sadowski - 07/20/2021 11:33 AM
Any other country can negotiate and send goods to Cuba. The "embargo" hurts the USA businesses. The Cuban government likes to blame the "embargo" for their lousy, oppressive, bloody government giving them an excuse for their failure. God bless those protesting for their courage and convictions. May Our Lady of Charity keep them safe. Patria y Vida!

Gustavo - 07/19/2021 11:29 PM
Embarrassing response! Instead of condemning the murderous communist Cuban regime. The Pope is talking about ‘fraternity”. Really? Has he seen the videos of teenage Cuban’s being beaten to death by the jackals dressed up as police in Cuba?