Story of unaccompanied Cuban children will premiere in Miami this month 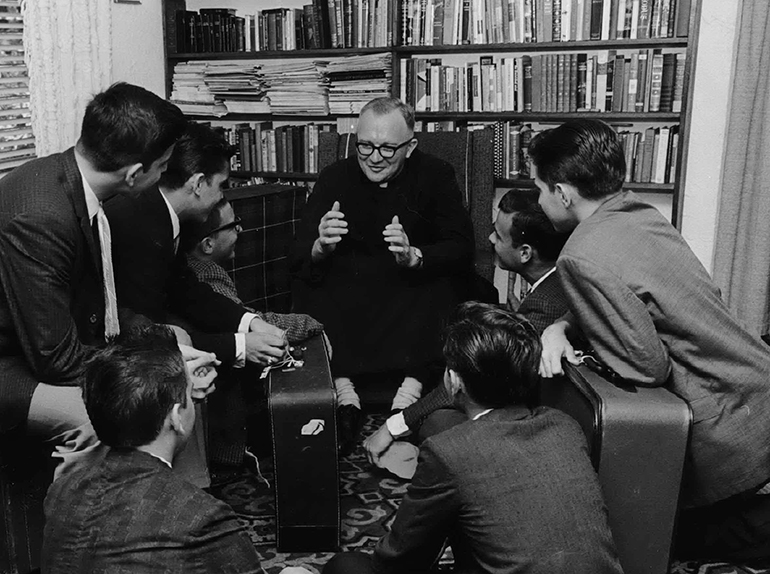 Monsignor Bryan O. Walsh speaks with a few boys who were part of the Operation Pedro Pan in the early '60s.

ORLANDO | “Operation Pedro Pan: The Cuban Children’s Exodus” is a newly released documentary that aired for the first time in the Diocese of Orlando Feb. 5, at Embry-Riddle Aeronautical University in Daytona Beach. Its Miami premiere is set for March 1 at Barry University.

The film chronicles the clandestine exodus of more than 14,000 Cuban Catholic, Jewish and Protestant children and the role of Msgr. Bryan O. Walsh, director of the Catholic Welfare Bureau in Miami at the time. It also showcases how Catholic Charities worked with foster families in 200 cities throughout 48 states.

The turmoil began in January 1959 as many Cubans rejoiced with the overthrow of dictator Fulgencio Batista and hoped for a return to democracy under Fidel Castro. By fall of that year, the Cuban people learned that all was not as it appeared. By 1960, Catholic families looked to the newly formed Operation Pedro Pan (Peter Pan) as a way to save their children from communist indoctrination and give them a better life. The departures began in 1960 and concluded in 1962 when commercial flights ended due to the impending Cuban missile crisis.

Dominican Sister Lucy Vazquez was one of the first high school girls to arrive on a Pan Am flight through the Unaccompanied Cuban Children’s Program, dubbed Operation Pedro Pan by Miami Herald reporter Gene Miller. “I think my faith was the anchor for me when I came just having turned 16. Coming from a close-knit family and the values my parents instilled in me sustained me and helped continue forming me after I was separated from them,” said Sister Vazquez. She spent a short time in Miami and then was sent with a group of girls to the Daughters of Charity at St. Vincent’s Home in Washington, D.C.

“I think it was a different experience for them (the sisters) because their population was girls who were either orphans or whose parents could not take care of them,” she said. This was not the case of the Cuban girls who were not orphaned and whose parents “had made the ultimate sacrifice to protect them.”

Professing vows to the Dominican Order at age 18, Sister Vazquez was the first woman to ever receive a doctorate in canon law from The Catholic University of America in Washington, D.C., to be president of the Canon Law Society and chancellor of the Diocese of Orlando. She is currently defender of the bond for the Office of the Tribunal for the diocese. Although Sister Vazquez has not yet seen the documentary, she said she hopes that it sheds light on the plight of unaccompanied children.

Eduardo Rabel, a parishioner of Our Saviour Parish in Cocoa Beach and one of the Pedro Pans, as they call themselves, is interviewed in the documentary. He was 16 on July 17, 1962, when he arrived at Camp Matecumbe in Miami, one of seven Catholic Welfare Bureau camps in Florida. From Matecumbe, he was sent to Campbell Lodge Boys Home in Kentucky where he met Father Raymond Nieman, a Jesuit priest who would have a lasting effect on his life.

“The lodge was my home where I was provided with shelter, food, clothing, medical care, educational guidance and the opportunity to grow in a loving, caring, family environment,” Rabel said. It was 18 years before he was reunited with his mother and brothers. His father died in Cuba. Despite that hardship, he said it “was a steppingstone for me. I saw faith in action from a lot of different people that was good for me â¦ that became a big impact on my life.”

Being mindful of his experience, he said it makes him want to pay it forward. It is a common theme among Pedro Pans.

Melquiades “Mel” Martinez, also in the documentary, said, “I always felt that, as a Catholic who professes my faith, I also had an obligation to live in the public arena that which the Church teaches, whether it was in issues of life, poverty, need and want, immigration â all of those attitudes were shaped by my Catholic faith.”

Martinez, the former U.S. senator and secretary of the U.S. Department of Housing and Urban Development, went from Camp Matecumbe to Camp St. John near Jacksonville. When the camp closed, he was sent to the home of Walter and Eileen Young and their two boys, parishioners of St. Andrew in Orlando, who had “basically answered the call from a pulpit on a Sunday that they needed foster families,” he said.

“During those four years it was really prayer, faith, and the idea that there was a greater purpose that the Lord had in mind for us â somehow this was all going to be OK,” he noted. Martinez said that is when the Blessed Mother became his companion.

Camp St. John administrator Tom Aglio, who soon after established Catholic Charities of Central Florida, recalled how the boys found solace in their common plight. “Individually, they struggled, but together, they somehow survived,” he explained.

It was Aglio’s job to prepare the boys who would not be immediately reunited with family for their transition to foster homes. He would later bring two of the boys into his own family. In a letter he sent to each of the boys after the camp’s closure, he invited them to “be good Catholics, practice your faith with sincerity and conviction.”

Cesar Calvet, current commissioner of the Orlando Utilities Commission and owner of Calvet Consulting LLC, spent time at Camp San Pedro and later at Camp St. John with his childhood friend Martinez. Because the San Pedro Spiritual Development Center in Winter Park was set up for summer camp, it was temporarily converted to housing for the children who arrived in record numbers. Calvet was eventually taken in by June and Jim Berkmeyer and attended Bishop Moore High School in Orlando. He credits the tenacity to forge ahead to his parents. He and his wife, Olga Rodriguez Calvet, also a Pedro Pan, both find gratitude and service essential.

“This country welcomed us with open arms, so we had it in us to give back,” said Cesar. The Calvets are active at St. James Cathedral, the Diocese of Orlando and Bishop Moore.

George Mas, who now lives in Ormond Beach, was 10 when he came with his brother Juan, 12. They ultimately went to the Mariana Boys’ Home in Wichita, Kansas, run by Father Robert Kocour under the auspices of Catholic Social Services. Eighty children went through Mariana Home, but Mas was the first to arrive and the last to leave at age 18. He was married when he finally reunited with his parents 10 years after he left Cuba.

“I think it is important for people to know how great this country is,” said Mas. “You can come here without even knowing the language and you can go to college and work hard. I know because I did it.”

Reflecting on the Pedro Pans’ journey and the current immigration crisis, Martinez noted, “I think today we’re looking at immigrants potentially with fear and threat as opposed to understanding that the dream of a better life is something that America has always stood for. When we think about the better nature of our country, who we are as a people, the dreamer issue is a simple matter. â¦ The America I was privileged to come to and be a part of would only have one answer for them which is welcome and make something of yourself and make America better.”

Miami resident Carmen Romañach, president of Operation Pedro Pan Group Inc., said the documentary’s mission is “to share the film throughout the United States.” She gives thanks to Catholic Charities and all those who took part in helping so many.