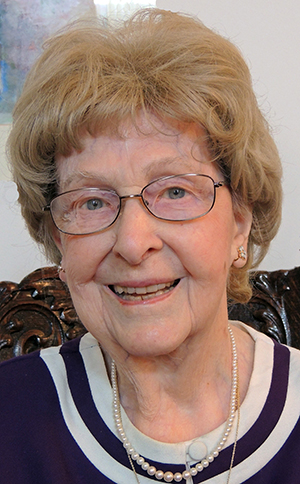 PITTSBURGH | Sister Mary Damian (Grace) Waldron, one of the original Sisters of Mercy who assumed management of Holy Cross Hospital in Fort Lauderdale in 1959, died Nov. 6 at the age of 101. She had been a Pittsburgh Sister of Mercy for 76 years.

Sister Damian was instrumental in establishing the Department of Pastoral Care and organized the Tumor Registry at Holy Cross. Her personality and ability to interact graciously with others allowed her to bring peace to individuals and families in the Holy Cross Emergency Room.

“The greatest love of Sister Mary Damian’s life was the people of Holy Cross,” said Sister Susan Welsh, president and CEO of Pittsburgh Mercy, a community health and wellness provider.

Sister Damian was born in Pittsburgh, Pennsylvania, Jan. 21, 1918. She entered the Sisters of Mercy in Pittsburgh July 1, 1943 and made final vows Aug. 2, 1949. She earned a degree in sociology from Mount Mercy College (now Carlow University) and taught at Our Lady of Mercy Academy and St. Paul Orphanage before working in the business office at Mercy Hospital in Pittsburgh (now UPMC Mercy). She came to Fort Lauderdale after that and returned to the convent in Pittsburgh in 2014.

In preparing her own funeral liturgy, Sister Damian included a note to her family, community, and friends which reads in part: “I leave you a solemn promise that after I am home, in the bosom of God, I will still be present with each of you, whenever and wherever you call on me.”

Her funeral Mass was celebrated Nov. 9 in the Chapel at the Convent of Mercy, followed by interment in St. Xavier’s Cemetery, Latrobe, Pennsylvania. Donations in her memory may be made to Holy Cross Hospital / Sister Catherine McAuley Fund, 4725 North Federal Highway, Fort Lauderdale, FL 33308 by mail, online at www.holycrossdonations.com or by calling 954-229-8562.