ADRIAN, Michigan | Funeral services will be held next week for Sister Jeanne Burns, who served as teacher and then principal of St. James School in North Miami from 1959 to 1965.

Formerly known as Sister Thomas Raymond Burns, she died July 18 at the age of 90, and in the 71st year of her religious profession in the Adrian Dominican Congregation.

Born in Chicago, Illinois, Sister Jeanne spent 19 years ministering in elementary and secondary education in Jacksonville, Miami and West Palm Beach, as well as Cleveland, Ohio. This includes three years at Rosarian Academy in West Palm Beach, and the six years as principal at St. James. 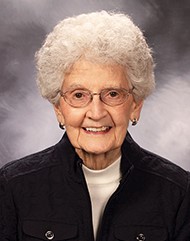 She served as Vicaress General for the Adrian Dominican Congregation from 1968 to 1978. She was chaplain at Rochester Methodist Hospital in Rochester, Minnesota, for one year and director of Pastoral Care for six years at St. Vincent Hospital in Toledo, Ohio. She also ministered for 18 years at Dominican Hospital in Santa Cruz, California, where she was chaplain for three years, vice-president for 11 years, and patient relations representative for four years. Sister became a resident of the Dominican Life Center in Adrian, Michigan, in 2013.

Sister Jeanne is survived by loving nieces and nephews and her Adrian Dominican Sisters. Funeral services will take place beginning at 6 p.m. Monday, July 22, in the Dominican Life Center’s St. Catherine Chapel, followed by a funeral Mass Tuesday, July 23, at 10:30 a.m. She will be buried in the congregation’s cemetery.

This article was updated after publication. It now notes the exact years Sister Jeanne served at St. James, which had not been available initially.