He died March 12, 2021, at White Plains Hospital in White Plains, New York, of complications from COVID-19 after more than three weeks’ hospitalization. 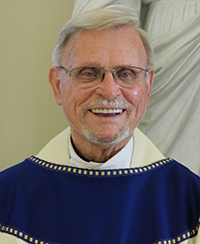 At the time of his death, Father Grinsell, 79, was assistant pastor of St. John Bosco Parish and director of mission for the Don Bosco Community Center in Port Chester, New York. A priest for almost 50 years, he would have reached his golden jubilee of ordination on April 3, 2021. He was a professed Salesian for over 59 years.

Father Grinsell entered the novitiate in Newton, New Jersey, in September 1959. He professed his first religious vows on Sept. 8, 1960, at Newton, and his perpetual vows on June 25, 1966, in Ellenville, New York. He graduated from Don Bosco College in Newton in 1964 with a bachelor’s degree in philosophy, then undertook theological studies at the Pontifical College Josephinum in Worthington, Ohio. He also earned a master’s degree in Christian spirituality at Creighton University in Omaha in 1995. He was ordained in Columbus, Ohio, on April 3, 1971.

Following his ordination, Father Grinsell was a congenial and effective teacher, guidance director, and local superior at several Salesian schools in New Jersey and New York as well as St. Petersburg Catholic High School in Florida. His teaching field was religion. He was master of novices at St. Joseph’s Novitiate in Newton from 1986 to 1989, and spent more than 16 years in parish ministry, including his time at St. Kieran.

Father Dominic Tran, one of his superiors, said Father Grinsell “was very attentive to the needs of the parishioners — visiting the sick, bringing people Communion, making sure things were ready for young people in the youth center or CCD classrooms, etc. Nor did he mind rolling up his sleeves to help clean out a house of an elderly parishioner.”

Father Grinsell was well known for his love of sports, especially basketball, his constant cheerfulness, and his penchant for rhymes and catch-phrases in his preaching. To entertain kids (and confreres too) he loved to imitate the voice of Donald Duck.

He is survived by his sisters, Patricia Akers of Proctorville, Ohio, and Frances Milam of Fort Mill, South Carolina; his brother, Edward Grinsell Jr. of Billings, Montana; his sister-in-law, Dorothy Grinsell of Richmond, Virginia, and many nieces, nephews, and cousins.