Model yourselves after a simple country priest 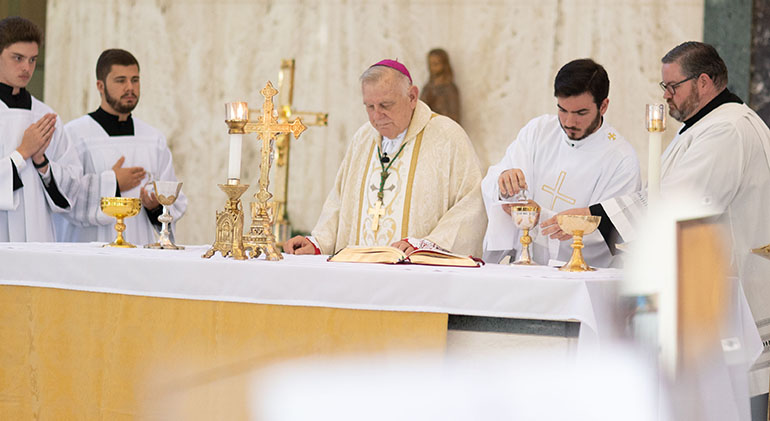 On the feast day of St. John Vianney, Aug. 4, 2022, Miami Archbishop Thomas Wenski celebrated Mass at St. John Vianney College Seminary in Miami at the conclusion of the annual convocation of Miami seminarians. 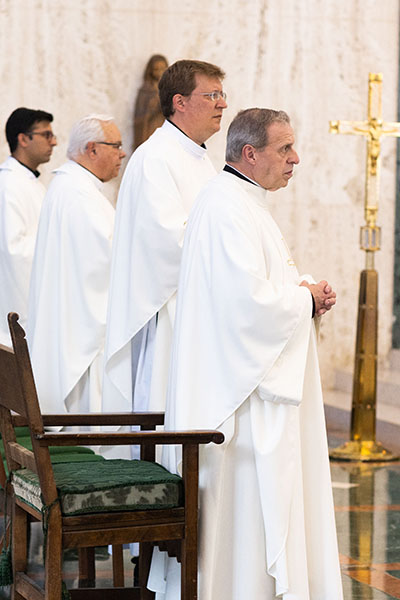 On the feast day of St. John Vianney, Aug. 4, 2022, Miami Archbishop Thomas Wenski celebrated Mass at St. John Vianney College Seminary in Miami as part of an annual tradition to meet with seminarians and visit the seminary with a dinner reception following Mass. On hand were the seminary rector-president, Msgr. Pablo Navarro, front, along with Father Matthew Gomez, director of vocations for the Miami Archdiocese, and Father Emanuele De Nigris, second from left, rector of nearby Redemptoris Mater in Hialeah.

Archbishop Thomas Wenski preached this homily at the Mass closing the annual convocation of seminarians of the Archdiocese of Miami. The Mass was celebrated at St. John Vianney College Seminary in Miami, Aug. 4, 2022.

In today’s Gospel reading, Jesus succinctly presents to us the tasks of discipleship – tasks that you will embrace, God willing – in new ways as ordained priests. The Church proposes to you as a model to emulate a simple country priest – not very learned but a true disciple of Jesus Christ: St. John Mary Vianney, patron of this seminary and patron of the diocesan priest.

Jesus tells his disciples: “Proclaim the Kingdom of God ... Cure the sick, raise the dead, cleanse lepers, drive out demons.” That’s quite a job description!

As Jesus’ heart was moved with pity for the troubled and the abandoned, those who seem like sheep without a shepherd, so too a priest’s heart should be moved. Pastoral charity – and not the desire for fame or fortune – should motivate the priest in his ministry.

A priest is to “cure the sick”; that is, to attend to the ill and the injured, healing their isolation with a visit and bringing courage to those who are weak; a priest is to raise the dead, that is, to restore hope to those deadened by discouragement and defeat; a priest is to cleanse lepers, that is to befriend the outsider, to extend the hand of friendship to the marginalized and rejected; a priest is to drive out demons, by helping people deal with the various addictions that affect them and by not failing to address any personal demons that may threaten the integrity of his commitment.

A priestly vocation, in the words of Pope St. John Paul II, is both a “gift and a mystery.” To embrace the gift and to enter into the mystery which enables the priest, in communion with Jesus, to act in his name and in his sight, as a shepherd of souls, is a step not to be taken lightly. That’s why we take so seriously the formation you undergo at our seminaries. And, since the priest offers the Holy Sacrifice every day, sacrifice must also be the condition of his life. In giving Christ’s Body and Blood, we must also give our body and blood for the life of our people. 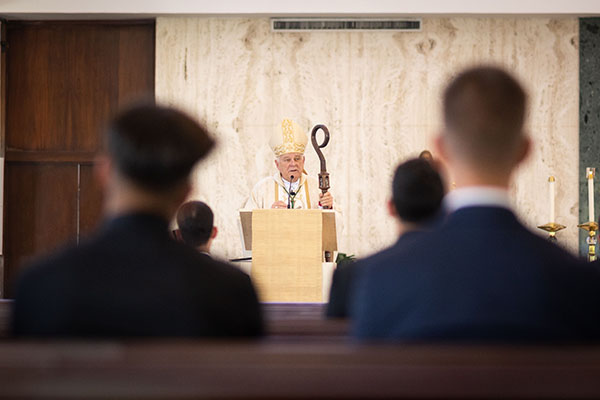 And so celibate priests are rightly called “fathers” – for the faithful are brought to life in Christ, and they are sustained in that life, through the sacramental ministry of priests.

Jesus loves us with a human heart. The Sacred Heart of Jesus reminds us of the humanity of Jesus – but also of the concreteness of his love. Love is not an abstraction, it is not a philosophical axiom; love is always an action, a deed. It is a “giving away” of oneself – even as Jesus gave away himself on the cross for our salvation.