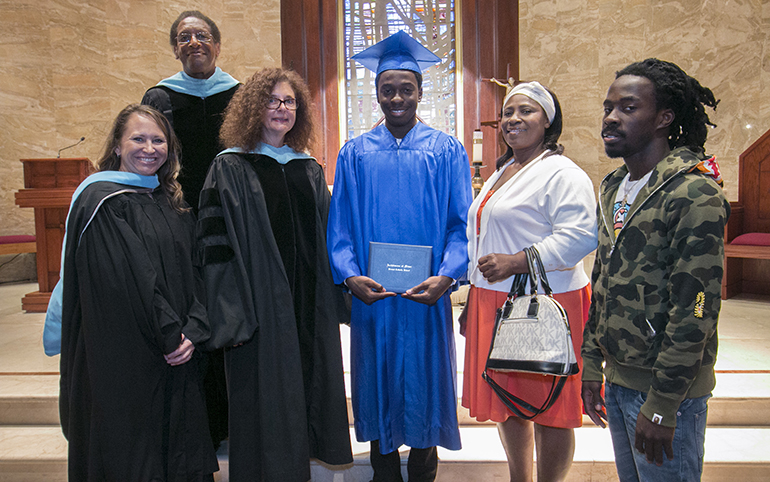 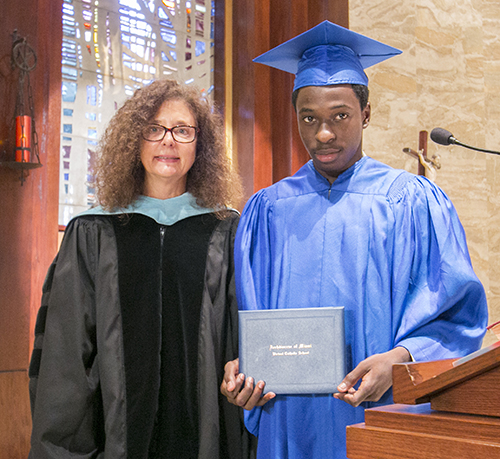 MIAMI | The crowd was small but there was no lack of pomp and circumstance as Samuel Ambroise became the first local graduate of the Archdiocese of Miami Virtual Catholic School.

In fact, Samuel’s unique status probably made him the only 2018 archdiocesan graduate to receive his diploma from the superintendent of archdiocesan schools, Kim Pryzbylski.

Wearing his royal blue cap and gown, Samuel sat next to her and his virtual school teacher, Marcey Ayers, as well as associate superintendent Donald Edwards. Ayers is also director of special programs for the archdiocesan Schools office. Nearby were Samuel’s mother, Ketty Ambroise, and his brother, Pekto.

Also present at the regular 11:45 a.m. Mass at St. Martha Church July 19 were employees of the archdiocesan Pastoral Center who have gotten to know Samuel as a frequent visitor to the Schools office.

Edwards met Samuel when he briefly filled in as principal at Holy Family School in North Miami a few years ago. Edwards helped Samuel enroll at Archbishop Curley-Notre Dame but its merger with Msgr. Edward Pace High last year made it difficult for Samuel to continue his schooling.

That’s when superintendent Pryzbylski stepped in. “We tried to meet his academic needs, and Virtual School was the best way to do that,” she explained.

ADOM Virtual is the only AdvancEd accredited and archdiocesan supported virtual Catholic school in the nation. Its teachers are state-certified, and it is registered with both the state of Florida and the College Board. It offers advanced placement courses for high school students as well as algebra honors and Spanish courses for middle school students who want to obtain high school credit.

Students can enroll on a semester basis, either full or part-time, based on their academic needs â such as, if illness or travel prevents them from attending a class at their school, or if their school doesn’t offer a specific class, or if they want to get ahead on credits during the summer.

Founded in 2011, ADOM Virtual enrolled students from as far as Oklahoma and Hawaii and as near as the Turks and Caicos, which recently celebrated their third graduation. (See picture below.) Samuel is the first Archdiocese of Miami student to graduate from the virtual school.

In his graduation speech, he thanked all the people who helped him reach his goal: his mother and family, Ayers and Edwards, and last but not least, Pryzbylski.

“You believed in me when it seemed like I had no place to turn,” he told her.

Editor's note: This article has been updated with a picture of the ADOM Virtual school graduating class in the Turks and Caicos, and corrected to say that this is the third, not second, graduating class from the islands' Holy Family Academy. 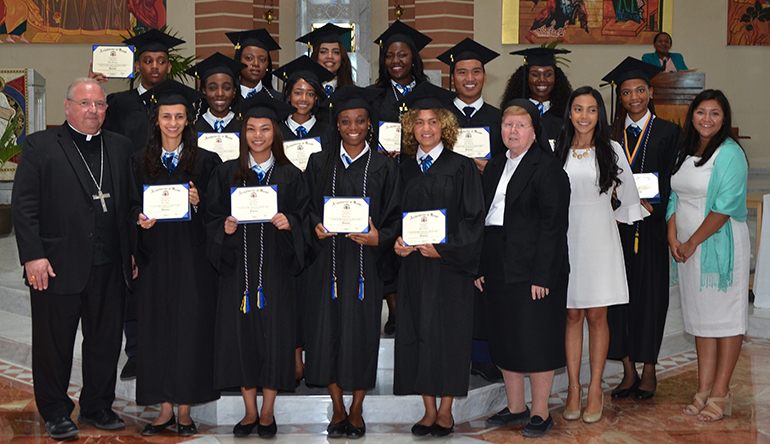 Graduates of Holy Family Academy and the Archdiocese of Miami Virtual Catholic School in the Turks and Caicos pose for a photo with Bishop Peter Baldacchino, far left, Sister Elizabeth Worley of the Sisters of St. Joseph, archdiocesan chancellor and COO, as well as their 12th grade teacher and principal. The Turks and Caicos educational system provides education through the 11th grade. In order to qualify for U.S. universities, the students of Holy Family Academy complete their 12th grade via the ADOM Virtual School, gathering daily as a group at the academy's classrooms. Holy Family Academy is the only Catholic school in the Turks and Caicos. It was established 12 years ago by Bishop Baldacchino, then a priest of the Archdiocese of Newark and pastor of Our Lady of Divine Providence Parish on the island. This is Holy Family Academy's third graduating class from the ADOM Virtual School.

Other News from Archdiocese of Miami Virtual Catholic School