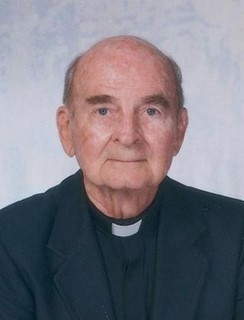 ST. PETERSBURG | Funeral services will take place this week at the Cathedral of St. Jude the Apostle, in St. Petersburg, for Msgr. George W. Cummings, a retired priest who served as founding principal of Archbishop Curley High School in Miami from 1952 to 1956, and founding pastor of St. Agnes Parish on Key Biscayne from 1952 to 1953.

"During his 76 years of priestly ministry, he served under seven popes and seven bishops and witnessed the exponential growth of the Catholic Church in Florida from one diocese to its current seven," wrote Deacon Rick Wells, St. Petersburg's chancellor, in a message to diocesan priests and staff.

Msgr. Cummings was born June 21, 1918 in Bridgeport, Connecticut, and attended schools in St. Petersburg. After his ordination, he taught Latin and religion at St. James School, in Orlando (1943-1944), worked as secretary to Archbishop Joseph P. Hurley (1946-1949), served as pastor of Blessed Trinity Parish in Ocala, and helped to establish Archbishop Curley High.

In 1947, he founded Our Lady of Good Counsel Camp, in Floral City, where he served as director for over 37 years. He was also appointed youth director for the Diocese of St. Augustine in 1956, a position which he held until 1964.

Before that, wrote Deacon Wells, Msgr. Cummings also witnessed the rapid growth of the Venice area, when he served for 20 years as pastor of Epiphany Parish, now the diocesan cathedral.

His last assignment was as pastor of St. Elizabeth Ann Seton Parish in Citrus Springs, which he led from 1976 until his retirement.

The funeral Mass for Msgr. Cummings will take place this Thursday, Aug. 13, 2020, at 10 a.m. It will be livestreamed on the cathedral's website: https://stjudesp.org/