MIAMI | What Yarlin Mejia will remember most about her former pastor, Oblate Missionary Father Alejandro Roque, are his joy and zest for life.

A joy he exhibited every year at her parish’s Mardi Gras festival, where he would don a red cape and a little crown and lead the parade, dancing. Or every Sunday at the 12:45 p.m. Spanish Mass, where he never failed to play the “claves,” wooden rhythm sticks that mark the beat in Cuban music.

Then there was his personal touch: Calling up every child present during Sunday Mass to give each one a special blessing. And going around to each person who was new at every Mass to ask what country or parish they were visiting from.

“Always laughing, always dancing, always smiling,” said Mejia, 26, a parishioner of St. Stephen Church in Miramar since around age 4, and now a leader in the parish’s young adult group. 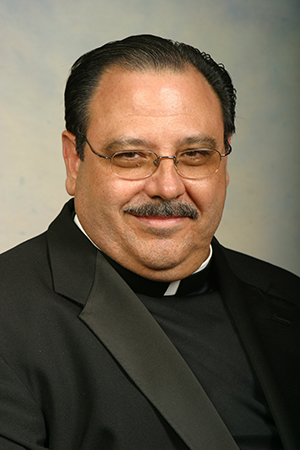 Father Roque, who served as pastor of St. Stephen from 2005 to 2013, and as pastor ofSt. Monica in Miami Gardens from 1993 to 2002, died July 10 at Tufts Medical Center in Boston, after battling cancer for several months. He was 66 and had spent nearly 37 years in religious life, 31 of those in priesthood.

“It’s just so unbelievable” how quickly it happened, said Mejia, who had visited Father Roque with her family back in May.

He was living in Buffalo, New York, at the time, where he served as director of the Oblate Mission Center. About a week ago, failing health caused him to enter the Oblates’ Immaculate Heart of Mary Residence in Tewksbury, Massachusetts.

“We got to see him and take a picture with him,” Mejia said of her visit in May. “He was still very positive. He still had the same smile, the same laugh. He cried when he saw us. He gave us a blessing.”

Mejia said her family enjoyed a close relationship with the priest, who would sometimes come over for dinner. But he made everyone at St. Stephen feel special.

“He had this way of being,” she said. “He cared for people’s hearts. For who the person was. He made time to know us.”

Yomaira Diaz, another young adult who grew up at the parish, said “if it wasn’t for his love of community and inclusion,” the young adult ministry at St. Stephen would never have gotten started.

“He was one of the first priests to believe that there is an importance to a parish having a young adult ministry,” said Diaz, now an administrative assistant in the Office of Christian Formation of the Diocese of St. Augustine, Florida.

She remembered the first meeting she had with him about starting a young adult group.

“After he listened to me, he said: ‘This is all great and I am excited about this. If you haven't thought of a name, then read Lumen Gentium, because Christ is the Light and the youth need to just look for him.’ Such an amazing human being and such a smart person,” Diaz said.

Alejandro Roque was born March 1, 1953, in Havana, Cuba. He attended the Marist Brothers school in La Víbora from 1958 until 1961, when his parents sent him and his brother to Miami via Operation Pedro Pan. The program, organized by the Catholic Church, brought more than 14,000 unaccompanied Cuban minors to the U.S. between 1960 and 1962.

In Miami, Father Roque attended public elementary schools, graduating from Miami Senior High and what was then Miami-Dade Junior College, North. He continued his studies at Creighton University in Omaha, Nebraska, before entering the Missionary Oblates of Mary Immaculate novitiate in Godfrey, Illinois, in September 1982.

He professed his first vows there Aug. 1, 1983, and continued his studies at the Oblate College in Washington, D.C., receiving a bachelor’s degree in philosophy and a master’s degree in divinity.

He professed perpetual vows as an Oblate on Sept. 7, 1986, and was ordained to the priesthood June 11, 1988, at his home parish of St. Monica in Miami Gardens. His first assignment, from September 1988 to September 1993, was as parochial vicar at St. Stephen.

He moved to St. Monica as administrator in September 1993 and remained there as pastor until July 2002, when he was named vocation director for the Southeast/Southwest areas of the Oblates’ U.S. Province.

He returned to South Florida in July 2005, serving as pastor of St. Stephen until the Oblates decided, in July 2013, to prioritize other missions and no longer staff parishes in the Archdiocese of Miami.

Father Roque then took a sabbatical year to pursue studies at the Institute of Religious Formation at the Catholic Theological Union in Chicago. He served the rest of the time in Buffalo, including as director of the Oblate pre-novitiate and as superior of the Buffalo community.

When he left South Florida in 2013, Father Roque spoke to the Florida Catholic about his work at St. Monica and St. Stephen: “St. Monica and St. Stephen parishes are microcosms of the whole world — the missions came to us. It is not just about speaking a language, but the intricacies of all the different cultures and languages and of working in harmony.”

He added that the people of South Florida would never be forgotten by the Oblates. “In a lot of ways our (Oblate) spirituality is in the people,” he said. “South Florida is my home and I have family here; my heart is here.”

The funeral Mass will be celebrated July 13 at 11 a.m., at the Immaculate Heart of Mary Residence in Massachusetts, followed by burial in the Oblate cemetery there.

Donations in memory of Father Roque may be made to the Oblate Infirmary Fund, 486 Chandler Street, Tewksbury, MA 01876.

DARIO J POLANCO - 07/11/2019 07:08 PM
Father Alex was undoubtedly an excellent priest, charismatic, cheerful and above all a great human being who cared very much for the community that corresponded to serve as pastor. Personally I have very good memories of Father Alex because he helped me a lot to grow in faith. I am sad because of his untimely departure, but Heaven is happy to receive one of his children back to the father's house.