Longtime pastor of St. Coleman, Pompano Beach, had been a priest for nearly 52 years 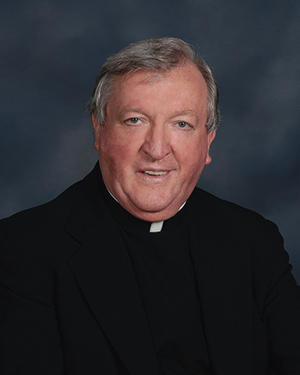 MIAMI | An anniversary celebration for St. Coleman Parish turned into a celebration of life May 19 as parishioners remembered their much loved, longtime pastor, Father Thomas Foudy.

Father Foudy died unexpectedly around 3 a.m. Sunday at Holy Cross Hospital in Fort Lauderdale. His death coincided with the 60th anniversary of the parish he led for 26 years. Father Michael Garcia, the parish’s current administrator, made the announcement at the Mass that preceded a celebratory parish picnic.

Born Sept. 19, 1941, in Inagh, County Clare, Ireland, Father Foudy was ordained June 10, 1967, in Thurles, Ireland. He came to South Florida that same year and served as parochial vicar at St. Timothy, Miami (1967-69), St. Margaret, Clewiston (1969-70); and St. Anthony, Fort Lauderdale (1970-71). He studied in Rome from 1971 to 1974 and upon returning joined the faculty at St. Vincent de Paul Regional Seminary in Boynton Beach, teaching dogmatic theology. He was named pastor of St. Coleman in 1989, and remained there until his retirement from fulltime ministry in June 2015.

For more details on Father Foudy’s life and ministry, see Florida Catholic freelancer Linda Reeves’ story on the May 19 celebration at the parish.

This article has been corrected to note that Father Foudy taught dogmatic, not moral, theology at the major seminary.

Rhonda Douglass - 05/20/2019 06:50 PM
Rest In Peace Father Foudy! You were always there for me in my time of need and for that I was always grateful. I was honored when you called me and asked to be the Schools President of home and School! When you baptized me and made me a Eucharistic Minister! You will be dearly missed but I know you are in Heaven flying like an Angel! Till we meet again! ðð»ðð»ðð»

Rita Vietmeier - 05/20/2019 04:31 PM
No one will soon forget Fr. Thomas Foudy for his genuine caring attitude and his ability to make you feel special and remembered. He would distribute Holy Communion and say "Body of Christ, Rita" and to the next person, Body of Christ James, John etc. He knew all of us by name. I moved and changed parishes and so hadn't seen him for years until I ran into him in September of 2018 at Holy Cross Cancer Center where I was being treated. And he still remembered me and my husband. A truly remarkable man. Rest in Blessed Peace Father Foudy.

Todd - 05/20/2019 12:16 PM
Father Foudy was my priest growing up. I went to CCD there and grew up in the neighborhood. You would always see him out doing something for someone else all the time. Father Foudy would be the first person at the front door to greet everyone and the last person making sure everyone got in their car. I just always remembered him smiling, hugging and shaking everyone’s hand. Rest In Peace Father Foudy!!!

Other News from St. Coleman Church