Sixth through eighth-graders invited to have fun, deepen faith at 'To the Heights!' conference

MIAMI | Dynamic speakers, music to jam to, games, and the sacraments: all the ingredients for a fun, faith-filled day aimed at middle schoolers will be coming to Archbishop McCarthy High School in Southwest Ranches on Saturday, Oct. 12, from 1 to 9 p.m.

The theme for this second annual conference for middle school students — “To the Heights!” — was inspired by “the man of the beatitudes,” Blessed Pier Giorgio Frassati, a favorite almost-saint among young people. The young candidate for sainthood is best known for this exhortation encouraging Catholics to seek the things “above.” 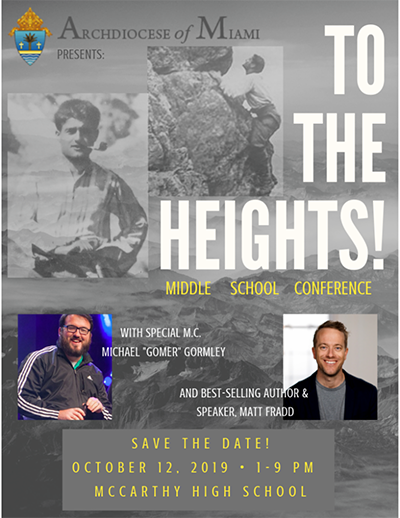 The 20th century Italian was known for living life to the fullest, enjoying hobbies such as mountain climbing. Never one to compromise his faith, he encouraged his peers to seek virtue, earning the nickname “the man of the beatitudes” from St. John Paul II. Frassati succumbed to illness while in his early 20s, but his letters are read and re-read by young people around the world.

The aim this year is to inspire the young people to reach “for the heights,” to remind them that they are not called to live lives of mediocrity, said Rosemarie Banich, archdiocesan director of the Office of Youth and Young Adult Ministry.

Parish youth groups and students from archdiocesan schools have all been invited, and there will be a special breakout session for eighth graders preparing for confirmation.

Last year’s inaugural conference grew out of a successful run with a high school-aimed event, Mercy Night. Parents, parishes and youth group leaders were emailing the youth office asking, “What about middle schoolers?”

About 600 middle schoolers attended last year’s conference, and the event got glowing reviews. The question naturally followed, “When’s the next one?”

This conference is meant to be “a moment of deep spiritual awakening,” Banich said. “We also want them to see how many young Catholics there are in the archdiocese.”

The hope is that, surrounded by their peers, middle school students will be inspired to be genuinely Catholic, especially as they see the example of conference volunteers — slightly older fellow Gen-Zers who will be leading games and small group discussions.

The millennial speakers at this year’s event also portray the joyful love of the faith, as did Frassati. Back for another year as emcee is Michael “Gomer” Gormley, and speakers include best-selling author Matt Fradd and the rapping Jesuit Brother Mike Martinez.

By the end of the day, students will have had the opportunity to go to confession, celebrate Mass, and participate in a Holy Hour with praise and worship led by the Soldiers of Mercy — winners of last October’s Archdiocesan Battle of the Bands.