Royal Lions: from rookies to champs 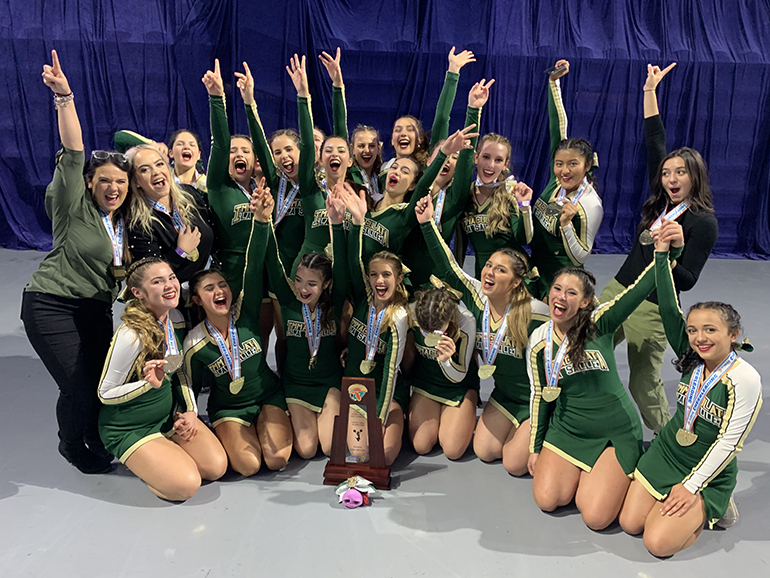 MIAMI | Two years ago, Immaculata-La Salle did not even partake in competitive cheerleading. Now the Royal Lions are state champions. 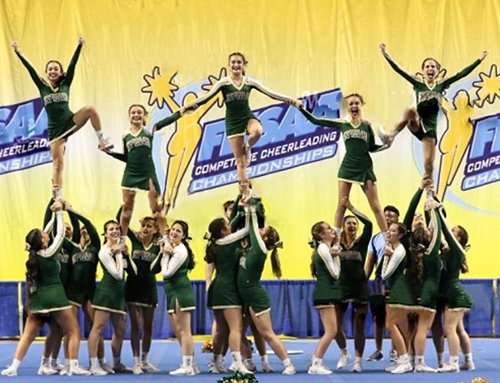 Immaculata-La Salle's Royal Lions perform the routine that earned them their first state title in competitive cheerleading Feb. 1, 2020, in the Class 1A extra-large non-tumbling division.

Coach Coral Buxeda said she built a winner with research. She studied those who had won before. She studied previous scores. She looked at school websites to see how others succeeded. That led her to sign up ILS for the extra-large non-tumbling division.

“We made it our goal to get to states in our division,” Buxeda said. “That was our goal: to work toward stunting goals to make sure they can do them at states.”

Regardless of the division, the Royal Lions put in the work. They practiced two to three hours a day. Penas said that work began as soon as the previous season ended. They did weight training, and also ran in the offseason.

Then they went to Universal Cheerleaders Association camps during the summer. It’s during those times that they built a base of skills. That was especially vital for the five freshmen who were coming onto the team, some of whom had never done cheerleading before.

When it was time to install the routine, they turned to Jupiter High School coach Robbie Gregory to increase their stunting ability. He came in nearly every Friday from October until the regionals in January. “He helped us in every aspect of stunting,” Buxeda said.

Andrea Dutkowski, a junior who serves as a base in Salazar’s group, said that coaches from St. Brendan High School — which claimed its fifth state championship this year — also provided lots of feedback and support as they were building their routine.

Salazar said the Royal Lions gained several elite skills. They learned Extended skills — those where they lift a flyer over the bases’ heads — and spinning skills.

“We were doing the very basic skills last year,” Penas said. “We started doing more turning stunts, more extending. Our pyramid was elite(-level). We tried to make our pyramid as hard as possible, because we had a lot of potential there.” 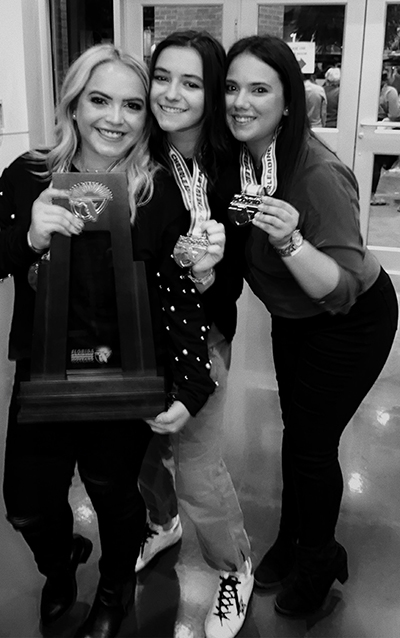 Immaculata-La Salle's cheerleading coaches, from left, Coral Buxeda and her assistant coaches, Emily RodrÃÂ­guez and Karyn Hernandez, show off their medals and championship trophy after winning the school's first state title in competitive cheerleading Feb. 1, 2020, in the Class 1A extra-large non-tumbling division.

Sofia Plasencia, a freshman who’s a flyer, said that some teams build a tough routine, then have to decrease difficulty to match their skills. “The fact we didn’t have to make it easier was good,” Plasencia said. “When we started to do local competitions, we actually had a chance.”

While they were building their routine, Immaculata-La Salle also built its team unity. With no seniors on the team, juniors had to take leadership roles. Penas said the practice time and the camps molded the team into a sisterhood. Then there’s the crucible of the season.

“We spend so much time together, we practically become sisters,” Penas said. “My best friends are on the team. The camps in the summer make a bond. Obviously, competition season when we travel together makes us a lot closer.”

Salazar said the freshmen joined the sisterhood quickly by embracing the work. Silvana Levito and Valerie Welvaert both earned a spot as a base. Plasencia became a flyer.

For Plasencia, the learning curve was steep. She had taken part in gymnastics —something one would think would benefit a flyer. However, since she only competed from ages 5 to 9, she had lost a lot of her skills. She had to regain the flexibility and core strength for the flyer role.

Plasencia didn’t have to worry as much about familiarizing herself at Immaculata-La Salle, because cheerleading brought her to campus in April before her freshman year. Through her cheerleading teammates, she already knew other students at the school.

Dutkowski said that she learned how to encourage freshmen from recalling how she came onto the team. After middle-school stints on the swim and volleyball teams, she had no knowledge of cheerleading. She came to the team halfway through her freshman season, expecting to cheer at football and basketball games. Little did she know the whirlwind that is cheerleading competition.

“I find it encouraging that Coral turned a lot of girls, especially ones who didn’t know about cheerleading, into a team that won a state championship after two years of cheerleading,” Dutkowski said.

Then it came time to start competing to see how the extra work played out. Some of that work involved adjusting for injuries and concussions sustained by several of the athletes. Some athletes also left the team. That forced Buxeda to adjust the routine, requiring additional work.

The crush came after the winter break when the Royal Lions began doing 100 repetitions of every skill and every part of the routine to get ready for regionals. That was in addition to cheering at basketball games. A second-place finish at regionals showed the team that more work remained. 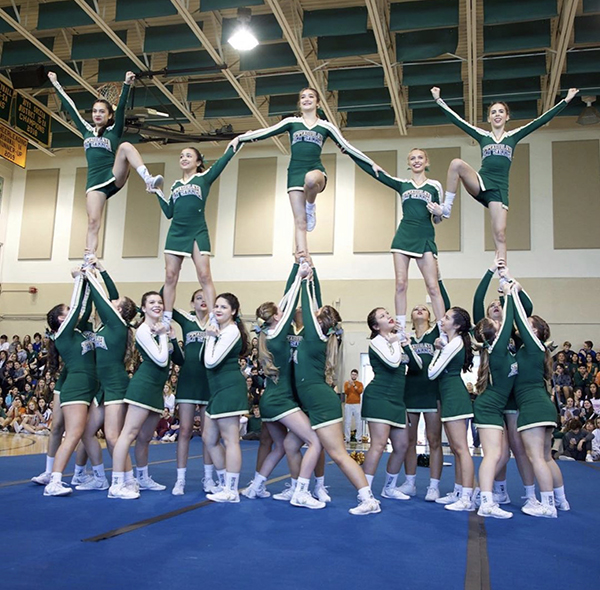 Immaculata-La Salle's Royal Lions perform their cheerleading routine at the high school's winter pep rally in January, just before their FHSAA Regional Competition. They won their first state title in competitive cheerleading Feb. 1, 2020, in the Class 1A extra-large non-tumbling division.

“After regionals, we went back to practice and did each stunt 100 times,” Buxeda said. “The vibe and aura of the team at states was they knew that if they hit this routine and did everything where it looks good, they’d win. As soon as they hit the mat, you could feel it off the mat. They hit a perfect routine.”

“It was all muscle memory,” Penas said. “I completely blocked out. The second we finished the routine and we hit zero deductions, I knew we did the best we could.”

Plasencia said she was nervous, because it was her first time competing in the bright lights of a big arena. She also said muscle memory took over. Thirty minutes later, the Royal Lions could celebrate their first championship.

“At the end, I couldn’t hold back my emotions,” Salazar said. “I was just crying, because I knew that we had won.”

The team didn’t have long to revel in their state title with nationals the next week. Buxeda said ILS did not have its best showing at nationals. She said that a performance on par with their state effort might have netted them a top 5 result. However, the Royal Lions still climbed from 14th to 10th.

“Next year, we can do better,” Penas said. “That’s our goal for next year.”

One advantage of having no seniors on the team is that the Royal Lions could have their entire team back next year. Dutkowski said the Royal Lions have already begun working on their title defense. They have set a state repeat as a goal, in addition to a top-5 finish at nationals.

She expects this year’s team to be better, because they are not losing any athletes while still potentially getting new athletes through tryouts. Penas agreed.

“We have the skill. We can build off that,” Penas said. “If we have the same mindset, we can go very far next season.”