Here's who's collecting for Bahamas relief 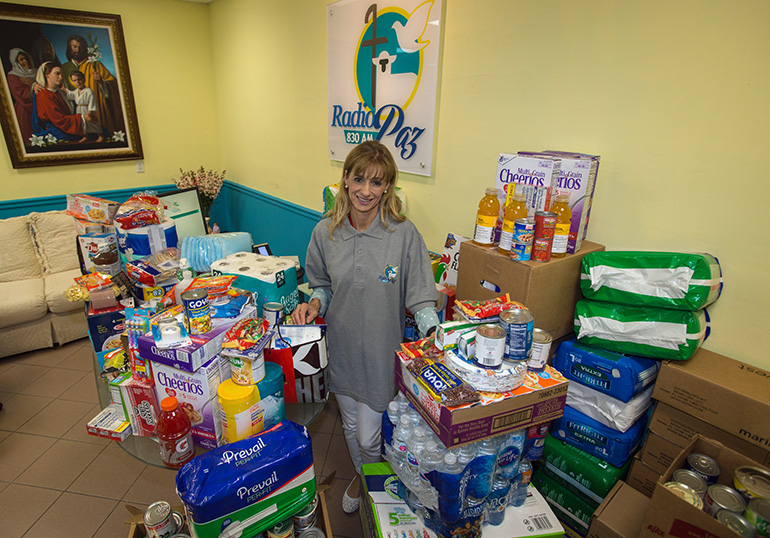 Radio Paz volunteer MariCarmen Oar stands in the middle of a few of the donations that donors have begun to bring to the studios of Radio Paz for Bahamas relief after Hurricane Dorian ravaged Grand Bahama, Freeport and Abaco.

MIAMI | Archbishop Thomas Wenski has called for a special collection to be taken up in all South Florida parishes to aid relief efforts in the Bahamas. The collection should be taken up at Masses this weekend, Sept. 7-8, or the next, Sept. 14-15.

The archbishop wrote that “proceeds would go to assist the Catholic Archdiocese of Nassau in its efforts to continue to serve its people and to rebuild after Dorian.”

The Catholic Charities website also has been accepting donations since Labor Day, when Hurricane Dorian’s record-breaking winds and deadly storm surge were still battering the island. The Miami agency has been working closely with Nassau Archbishop Patrick Pinder and his local agency, Caritas.

In addition to these archdiocesan efforts, parishes and schools in South Florida quickly jumped in to help their Bahamian neighbors. Here’s a round-up of some of those collection efforts and sites.

On Saturday, Sept. 7, St. Thomas University will turn its opening football game into a fundraiser for Dorian relief. First will be a tailgate party at the STU campus at 10:30 a.m.; then at noon, the Bobcats will play St. Thomas More University of Covington, Kentucky.

Fundraising goal is $5,000 for the day. The university says it will turn over 100 percent of the proceeds to the archdiocese for the Bahamas relief effort.

Spearheading the collection are the STU Student Government Association, Bobcat Athletics and the university’s Center for Community Engagement. 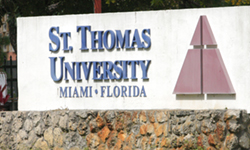 Gigi Laudisio, vice president for philanthropy and communications, said she has already given a heads-up on the collection via e-mail to about 500 alumni and VIPs who were planning to attend the game. She has even e-mailed staff, asking them to donate online.

St. Thomas has an active Caribbean Student Association, and many alumni are from the Bahamas, Laudisio said. She added that the university is helping its Bahamian students with counseling and other aid.

STU President David Armstrong said he wanted the first football game of the season “to live our mission by helping those in need.”

“We know we have students and families affected by Hurricane Dorian,” he said. 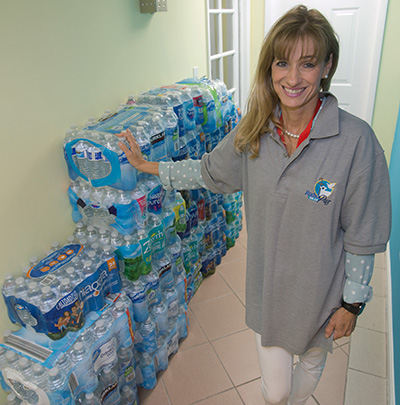 Radio Paz volunteer MariCarmen Oar stands beside some of the bottled water that donors have begun to bring to the studios of Radio Paz for Bahamas relief after Hurricane Dorian ravaged Grand Bahama, Freeport and Abaco.

Station personnel and volunteers also will be collecting items all weekend, Sept. 7 and 8, at the National Shrine of Our Lady of Charity in Miami, and during the celebration of her feast day, Sept. 8, at the Watsco Center, 1245 Dauer Drive, Coral Gables, beginning at 5 p.m.

After the Mexico City earthquake in 2017, Radio Paz collected and shipped 15 tons of supplies to the afflicted, according to Oar, who coordinated that drive as well.

“Everything that they give is going to go to the people that need it,” Oar stressed, noting that, as with Mexico, “we’re going to bring it ourselves.”

St. Joachim Church, where Msgr. Garza is the pastor, is also collecting goods for the relief effort, Oar said.

She’s calling other priests to ask for donations as well. “This [emergency in the Bahamas] is not going to be over anytime soon,” she said. 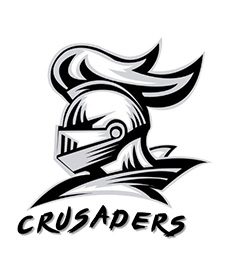 Members of the mission club at St. Michael the Archangel School, Miami, plan to collect donations for Hurricane Dorian relief during a rally Monday, Sept. 9, from 7:30 to 8:15 a.m., outside the cafeteria. The school has e-mailed parents of its 340 students, asking them to give toward Dorian relief.

The appeal is a response to the request from Archbishop Wenski for monetary donations rather than supplies, principal Carmen Alfonso said.

She added that the school will continue the appeal for two weeks or more. St. Michael’s web homepage also has a link for those who prefer to give online.

It’s all a good lesson in practical faith, Alfonso said. “We are Catholics,” she added simply. “We need to help whoever is in need now. So we do as much as we can.”

OUR LADY OF LOURDES ACADEMY

At Our Lady of Lourdes Academy in Miami, students, parents and alumni have chipped in with diapers, blankets, comforters, toilet paper, paper towels and other items.

The school will hold the collection through Sept. 13, said Sandy Rogowski, director of student activities. Then the family of a student, who has other relatives in the Bahamas, will ship the supplies there.