Women celebrate each other 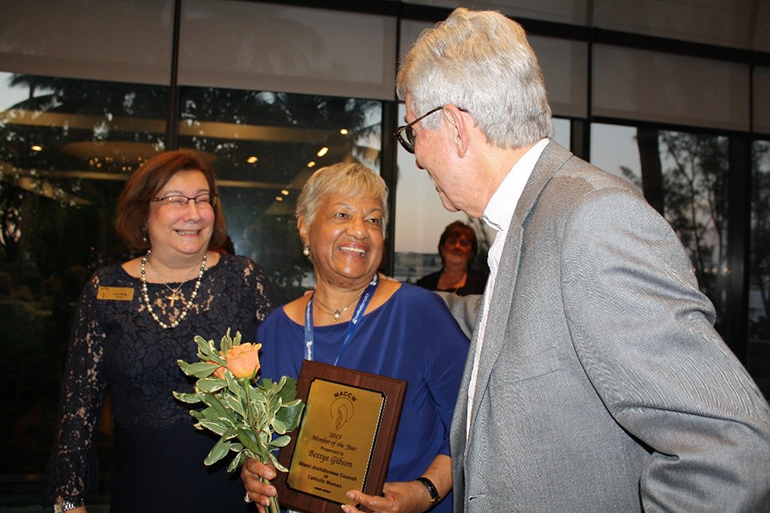 MIAMI | Claudette Spelman and Bettye Gibson were joyfully surprised when they received the two most prestigious awards given by their peers in the Miami Archdiocesan Council of Catholic Women.

Spelman was honored with the Our Lady of Good Counsel Award and Gibson received the Outstanding Member of the Year Award at the MACCW’s 61st annual convention, held in Miami May 17-19.

The awards honor council members for their selfless contributions in spirituality, leadership, and service. The Our Lady of Good Counsel Award — named after the group’s patroness — is given for outstanding dedication not only at the parish level but also at the district and archdiocesan level.

One nominee is selected from each of the MACCW’s three districts — South, Central and North — which encompass the area from Key West to northern Broward County. Each district each is comprised of several parish affiliates, also called women’s councils or guilds. 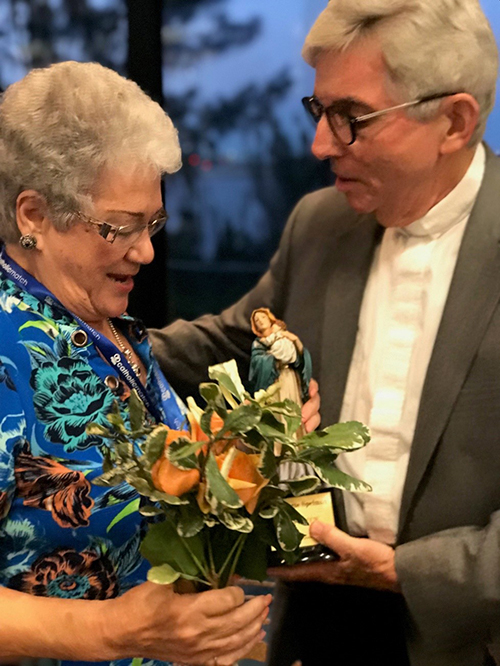 The Miami Archdiocesan Council of Catholic Women's Our Lady of Good Counsel award recipient, Claudette Spelman, of St. Andrew Council, accepts a statue of the group's namesake presented to her by Father Michael J. Greer, spiritual advisor, during the MACCW's 61st annual convention at the Miami Airport Hilton May 17.

Spelman said an Emmaus retreat taught her the value of stewardship and prompted her to join the MACCW, which she views as an extension of that experience.

“I didn’t want to give up the feeling of my encounter with the Lord,” she said, pointing out that serving allows her to continue her Emmaus walk and ultimately helped her find her purpose.

A mother of six, Spelman has weathered many storms in her life, but it was the death of one of her children, then a young adult, that led her to seek consolation and attend the first women’s Emmaus retreat at her parish, St. Andrew in Coral Springs.

“That weekend, Jesus held me, loved me and gave me strength not only to help myself, but to make a difference helping others,” Spelman said.

She became an extraordinary minister of holy Communion and began serving on the parish Stewardship Committee, which she now chairs. Spelman also served on the St. Andrew Council of Catholic Women, eventually as president.

The council’s current president, Raquel Sayago, nominated her for the award.

“Claudette is always there for advice and to lend a helping hand. The word ‘no’ is not in her vocabulary and she faces each challenge with a smile and a loving heart. She is truly a woman of faith and an inspiration to all our council members, giving her time and talent; and she is treasure for sure,” Sayago said.

Gibson has been a parishioner of St. Mary Cathedral since 1969. A soprano, she shares her talent by singing in the cathedral’s choir.

“If I am not singing, I feel like something is missing,” said Gibson, noting that her most memorable highlight was singing with the choir during St. John Paul II’s visit to Miami in 1987.

Sandra Hill, president of the Cathedral Council of Catholic Women, emphasized in her nomination letter that Gibson is a family woman who raised her children in the Church along with her late husband, John Gibson. He also served the cathedral as an usher.

Over the years, Gibson has held many positions in the cathedral council, including president, treasurer and secretary. She now serves on the MACCW’s Family Commission, requesting prayer intentions for the sick and other members at different Masses. She is known for working hard on any assignment with a spirit of joy and treating others with respect and kindness. She is also a long-time member of the Knights of Peter Claver, serving as the group’s treasurer at Holy Redeemer Parish in Liberty City.

“Bettye remains active in the CCCW, the cathedral choir, and all and everything we do to improve and enhance the cathedral’s spiritual and temporal life,” wrote Father Christopher Marino, cathedral rector, in his letter endorsing Gibson’s nomination for the award. “We continue to be blessed with Bettye’s beautiful voice, generous heart, and beaming smile every Sunday and throughout the week.”

Nearly 100 members participated in the three-day convention, according to Lisa Shelly, MACCW president. “We shared delicious meals together, celebrated accomplishments, drew closer to our Lord through our Masses and prayer services,” she said.

During 2018, the MACCW helped to facilitate a Catholic high school education for three eighth-grade girls, helped clothe 600 children, and distributed $8,700 in funds to help the homeless in the Archdiocese of Miami.

“It was a fine way to celebrate the work of the Miami Archdiocesan Council of Catholic Women,” Shelly said. “And we had fun also.”