Reviving a parish — and local lives — in the Lower Keys 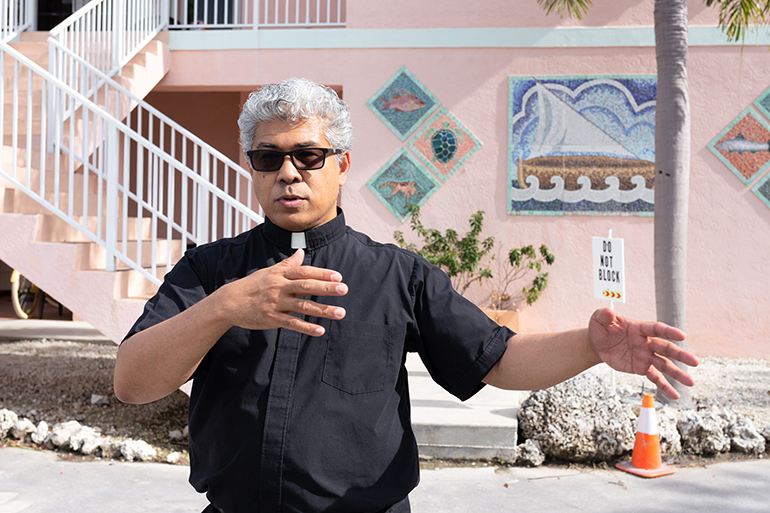 At St. Peter Parish in Big Pine Key, Father Jets Medina, parochial administrator, speaks to members of the Catholic Charities Board of Directors during their tour of Monroe County churches and projects.

This is the third in a series about Monroe County parishes and the work of Catholic Charities in the Florida Keys.

A formidable storm surge washed over the Keys church, leaving the stench of sea muck and ruin. Adjacent to the parish property, the American Red Cross soon established a tent city as a temporary regional operations center and staff residence for the post-Irma Florida Keys.

Memorializing the moment, the Wall Street Journal featured a front-page photo of an outdoor Mass held under a tent on the first Sunday morning following Irma.

“This hurricane was a life changing experience, a rude awakening for so many people — a very drastic change for our culture, our lifestyle, for the whole community,” recalled Vincent — who uses only his first name — a Key West-born native and property caretaker at St. Peter. He said prior to Irma, he had never evacuated for any hurricane in his 60 years in the Florida Keys. 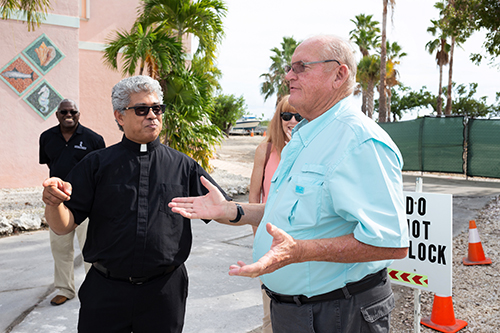 At St. Peter Parish in Big Pine Key, Father Jets Medina, parochial administrator, listens to Marty Mara, chairman of the parish building committee, which is overseeing the construction of a new church and rectory to replace the ones damaged by Hurricane Irma in 2017.

Marty Mara, chairman of the building committee overseeing a new church and rectory project following the hurricane, speaks of Irma with similar awe and respect:

“We always knew there would be another storm, but Big Pine Key never thought they would be the epicenter of that storm and have 180-mph steady winds, 228-mph gusts, and tornados,” said Mara.

Hurricane Irma’s greatest devastation to church property in Florida was likely at St. Peter. The church was rendered unusable and demolished in 2019 to allow for a new structure, built to state building codes at a higher elevation; the old rectory was also left uninhabitable and will be reconstructed.

During Irma, U.S. 1 was flooded throughout the Keys — the same thing that happened during Hurricane Wilma, according to Mara. “That’s why we are building up on higher ground,” he said.

After a long period of planning, design, fundraising, and permit approval with the Monroe County building and environmental departments, St. Peter recently received the approvals required to move forward with its reconstruction. The new building will be raised five more feet for a total of nine feet above sea level.

“It’s a massive rebuild but we have to do it to meet code and we just hope to get it done before the code changes again,” said Mara, adding a touch of humor to the rebuilding process in the Florida Keys.

“It’s 25 to 40 percent more expensive to build in the Keys and additional fill to raise the site will have to be brought in from Homestead. It’s not going to be an overnight process by any means,” he added.

Father Jesus “Jets” Medina, administrator of St. Peter, told a visiting delegation of Catholic Charities board directors late last year that virtually all the parish staff and parishioners were impacted by Irma at some level. Many members of the church community have not returned to the area, especially the seasonal visitors who rented properties during the winter.

But where some have sold homes and left, other families have moved in. Father Jets, as he prefers to be called, estimates St. Peter has about 500 parishioners during summer but triple that number — about 1,500 — during the winter season.

After Irma, Masses are celebrated in a small chapel in the summer and an outdoor, air-conditioned pavilion in the winter.

“We hope this is the last winter they will have to be in the tent and hoping to have first Mass in the new church during Christmas of 2020,” Father Jets said.

He remains upbeat even though the construction start time for the new church and rectory have yet to be announced.

“Right now, little by little we are rising back again. We have no church and no rectory, and nothing can be worse than that, homeless and churchless, but things will go back to normal again and things will be more beautiful than before,” the priest said. 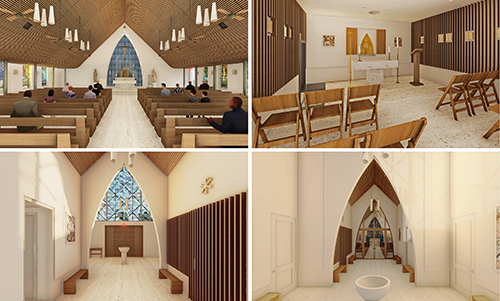 Architect's rendering of the new interior spaces at St. Peter Church in Big Pine Key after it's rebuilt to the latest hurricane code. The church and rectory are being rebuilt and raised five feet higher above sea level after being seriously damaged by Hurricane Irma in 2017.

“The new church will be built according to the latest code standards to combat hurricane force winds and flood waters,” said David Prada, senior director of buildings and properties for the Archdiocese of Miami. “The selected design scheme creatively resolves the challenges posed by elevating the building pad, driveways, and parking areas, as required to address the flood threat posed by climate change.”

Florida building codes require new structures to be erected one foot above the height of a “100-year flood” — a hypothetical flood that the Federal Emergency Management Agency says a particular area could expect to see about once every 100 years.

Oppenheim Architecture of Miami was selected to design the new church and campus in a simple style, with a Florida Keys aesthetic.

When the parish detailed the criteria for a new church, one of the first desires parishioners expressed was that the architectural style reflect the Florida Keys. So the building will incorporate coral stones and window shutters that can open, like those at the Basilica of St. Mary Star of the Sea in Key West.

Juan Calvo, vice president of design for Oppenheim Architecture, noted that the size and scope of the new parish campus will hew closely to the old structures. It will include covered walkways between buildings, a carport drop-off area and a new courtyard.

“We didn’t want to design something that is foreign or new or that would create new traditions,” Calvo said. “This is a place where families have been married, children baptized and so it needs to be familiar to people. It draws on a sense of Key West and the Caribbean with covered porches, colonnades taking you from building to building, sloped buildings in the conch house style, metal roofs, Bahamian shutters, a lot of things typical of the Caribbean architecture throughout the Keys.”

The church will be constructed largely of concrete block with painted stucco and metal roof, and a total seating capacity of between 200 to 300 people. In addition, there will be a lot of symbolism: the building’s keystone bases will reference St. Peter as the Rock of the Church; the entry area to the church will have a pediment representing St. Peter’s net; blue stained glass will symbolize the water. Several courtyards will offer space for socialization or meditation gardens.

With the help of Catholic Charities of the Archdiocese of Miami, the parish was able re-establish an emergency food bank for the community in the aftermath of Hurricane Irma. It continues to operate as the only food bank in the immediate area.

“Last month, we served some 89 families and 300 individuals, which for this community is big,” Mara said.

“Before the storm we had two food banks here, this one and the Methodist Church, but they got inundated and didn’t have the ability to come back. So we became the only food bank between Key West and Marathon. That is why we were really anxious to get back up and running again and we did, with a great group of volunteers, great support from the parish and from Catholic Charities,” he said. 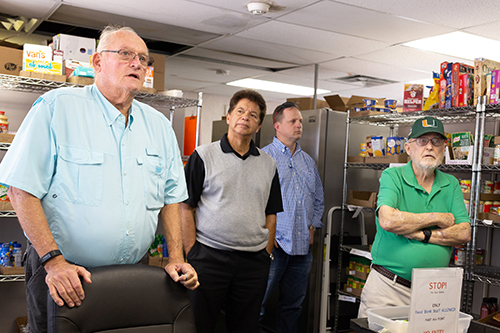 Marty Mara, left, chairman of the building committee at St. Peter Church in Big Pine Key, talks about the community food bank project at the parish. Listening are Peter Routsis-Arroyo, CEO of Catholic Charities in the Archdiocese of Miami, center, and members of the Charities Board of Directors who were on a tour of the churches and Catholic Charities projects in the Keys.

Mara added that an anonymous donor made a significant financial gift to the food bank operation following Irma.

Patrice Schwermer, the Key West-based Catholic Charities program director for Monroe County, credited Father Medina for letting her, her staff and volunteers, and other community agencies establish an emergency outpost at St. Peter in the wake of Irma.

“We have been able to come and utilize the office space here to do mostly hurricane relief, case management, and help people with late rent, utilities and to distribute food cards,” Schwermer said. “At one point, when we were having a lot of people coming to us with requests who were economically depressed because of the hurricane, we were able to serve them right here.”

“Big Pine was probably the hardest hit area in the Keys so it was important to be able to serve the people here and we really appreciated that,” she added, noting that representatives of the St. Vincent de Paul Society in Miami have been coming down and assisting with furniture donations for people in need.

“The hurricane just kind of changed everything and we are starting to get to that new normal,” Schwermer said.

Father Jets said the new normal includes new beginnings for the families who have come down since Irma.

“Some of our parishioners thought about just selling their property and they left, but there are new occupants and new residents coming in and some of them have baptized their kids here, so there are opportunities to have more people populating our church here. There is a circle of life of people going and others coming in; there is a new opportunity for new people,” the priest said. 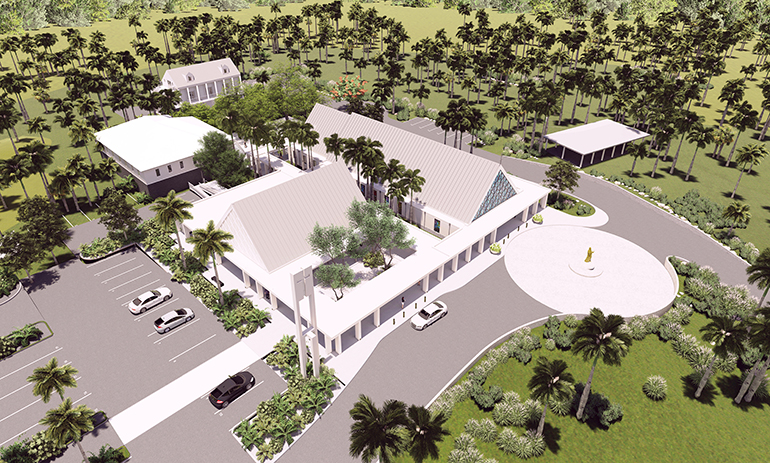 Aerial view of the campus of St. Peter Church in Big Pine Key after it's rebuilt to the latest hurricane code. The church and rectory are being rebuilt and raised five feet higher above sea level after being seriously damaged by Hurricane Irma in 2017.

D. Ann Saladino - 03/30/2020 11:14 AM
Great news about permit for rebuilding Church and Rectory of Big Pine Key! Congratulations Fr Jets and all your people. God's HAND has been on you from the beginning. Love and God bless! Ann (PS : Count in our presence for opening- maybe even ground breaking! ) ðð

Other News from St. Peter Church