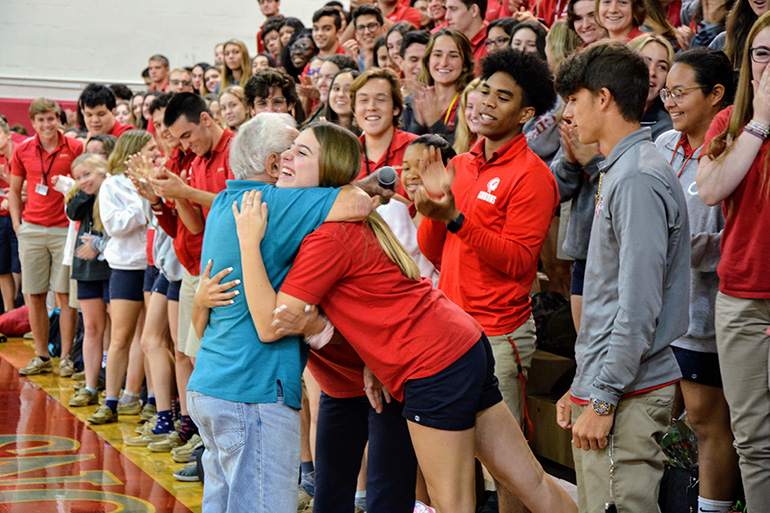 Holocaust survivor Bernard Igielski hugs a Cardinal Gibbons student after his talk to juniors and seniors at the school Feb. 20, 2020. 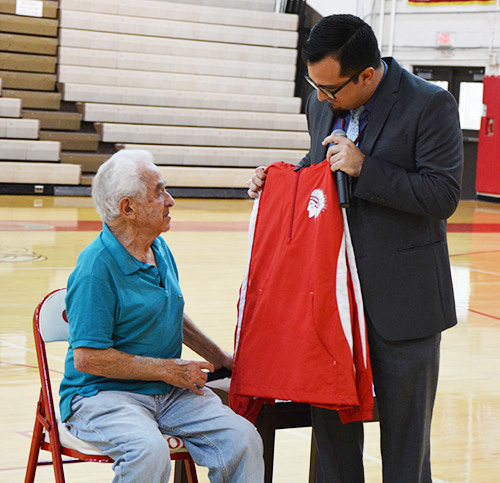 Cardinal Gibbons principal Oscar Cedeño presents a Gibbons fleece jacket to Holocaust survivor Bernard Igielski after he shared his story of survival with the high school's juniors and seniors.

FORT LAUDERDALE | Students at Cardinal Gibbons High School were afforded a rare experience Feb. 20, when they were able to hear the story of Holocaust survivor Bernard Igielski.

The 93-year-old was greeted with applause by junior and senior students as he was escorted by his neighbor, Cardinal Gibbons senior Michael Field, across the gymnasium floor. Igielski sat in front of over 400 wide-eyed students and detailed the years he spent as a prisoner during the Holocaust, beginning when he was only 12 years old.

Despite previously avoiding speaking about the atrocities he faced at such a young age, Igielski embraced the opportunity to share his experiences with students at Cardinal Gibbons.

Born in Brzeziny in 1927, he survived three ghettos in Poland and eight concentration camps, including Auschwitz, where over one million men, women and children were killed before its liberation in 1945. Igielski escaped death numerous times at Auschwitz, ultimately becoming a laborer. He lost his entire family during the Holocaust, leaving him to fight for survival on his own. However, he recalled his mother’s strength while living in the Polish ghettos, and told students that he believes what he learned from her was instrumental in his survival.

“I give my mother credit for my survival,” said Igielski. “I still feel her presence in all of my decisions.”

He also described how kindness from others in the camps helped keep him alive, telling students about a doctor at the camp whom Igielski credits with saving his life on four separate occasions. 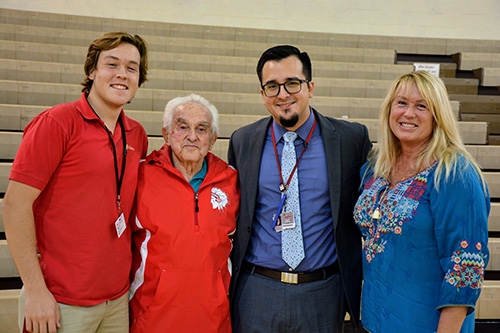 With survival, however, came strong feelings of guilt that he still grapples with today. “What I saw... what I went through... there’s a lot of guilt in my survival. I was just one of the lucky ones.”

Igielski also suffered through a three-week-long death march prior to his liberation by American armed forces in 1945.

But despite the hardships and horrors he experienced over 75 years ago, he still retains a positive outlook on life and aims to see the best in people. He described to students how even though the years he spent as a prisoner were the hardest times of his life, he could not truly hate the people involved.

“I don’t believe in hate,” Igielski said. “If you can look in the mirror and love yourself, then you cannot hate.”

This forgiveness was readily apparent in the life Igielski led after the Holocaust. Following his liberation, he spent over three years in Germany, living with a German family that took him in. He moved to the United States in 1948.

“Those were some of the happiest times of my life,” Igielski said. “You cannot blame a whole group [of people] for the actions of a few... In the end, I had to learn to love my enemies after my liberation.”

“This was a rare opportunity to hear a first-person account of these atrocities and educate our students that we could simply not pass up,” said Cardinal Gibbons principal Oscar Cedeño. “Our students need to hear stories like Bernard’s in order to learn and better mold the future.”

After sharing his story, Igielski opened the floor to questions from students. He shared more information about his life following his liberation, including experiences from his time serving with the United States Army in the Korean War.

Following the question and answer session, Igielski approached students in the audience with outstretched arms and tears in his eyes, embracing and thanking them for listening to his story.

At the conclusion of the presentation, hundreds of students waited patiently to hug Igielski and thank him for sharing his story. Many students and teachers left the gymnasium with tears in their eyes. 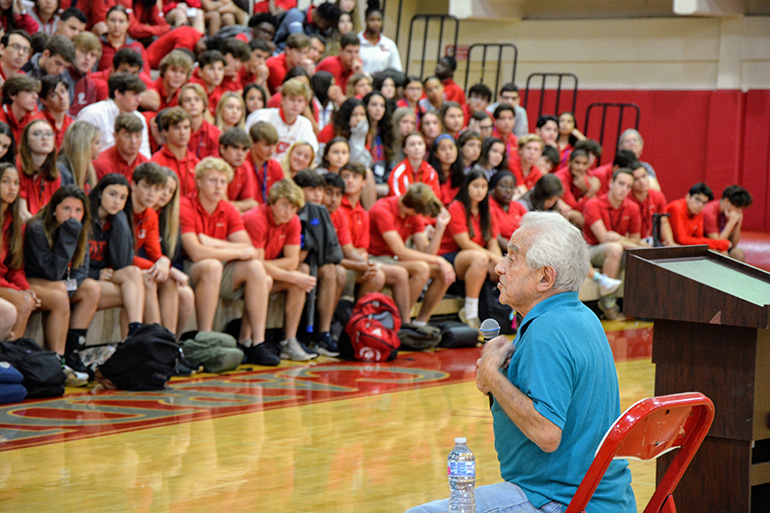