Father, grandfather became a priest at 58, after being widowed and serving as a deacon for 13 years

This article has been updated since it was posted, with more recollections from those who knew Father Musselman.

SUNRISE | Father Randall Musselman’s life as a priest ended where his life as a Catholic began, at All Saints Church in Sunrise.

A father and grandfather who was ordained at 58, Father Musselman died Feb. 21, after a brief battle with cancer and other complications. He was 69 and had been pastor of All Saints — his home parish — since July 2018. 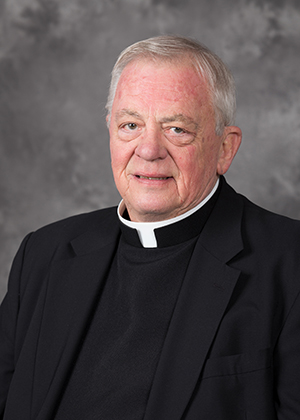 “When I spoke to Father Musselman a few weeks ago, he shared with me his diagnosis but he was confident that with chemo he would beat the disease,” said Archbishop Thomas Wenski, who will be the main celebrant of the funeral Mass.

“He loved his ministry, and he loved being pastor at All Saints where he had previously served as a permanent deacon,” the archbishop added. “He will be buried from the parish church he attended with his wife and family and later returned to pastor.”

Vilma Angulo, who served as director of religious education at All Saints from 2005 to 2007, recalled first meeting Father Musselman at his wife’s funeral, when he was still a deacon and she had been on staff for three weeks.

“I was asked to do one of the Mass readings in Spanish that day. After that I saw him infrequently, but he was always very kind and often reflective,” she said. “The last time I saw him was after the archdiocesan (priesthood) ordinations in May 2018. We ran into each other outside the cathedral and he was beaming: ‘Vilma, did you hear?  I'm going back to All Saints as pastor!’”

“His deep love for God, our Church and God’s people were qualities that earned my respect and admiration for him in the years I knew him,” Angulo said.

Father Musselman, born May 19, 1950 in Anderson, Indiana, was raised in the Baptist church. He felt the call to ministry early on and even entered a Baptist seminary in his home state. “But definitely the Baptist church didn’t work for me,” he said in an interview with the Florida Catholic in 2009.

After he moved to South Florida for work, he met the woman who would become his wife, Teresa Garcia, a native of Santa Clara, Cuba. They married in 1976 and raised their two daughters in the Catholic faith. Eventually they moved to Sunrise and joined the parish of All Saints, where he converted to Catholicism in 1987. That’s when he felt the call to ministry once more.

“I thought, what can I do in the Catholic Church?” he said in that 2009 interview.

A friend suggested the permanent deaconate, and Father Musselman followed through. He was ordained a deacon in December 1994 and served All Saints in that capacity for 13 years.

In 2007, two years after the death of his wife, he retired from his fulltime job with Beckman Coulter Corporation and entered St. Vincent de Paul Seminary in Boynton Beach. On May 9, 2009, he was one of three new priests — two of them grandfathers — ordained for the Archdiocese of Miami.

Father Luis Largaespada, now pastor at St. Hugh in Coconut Grove, was the young member of that class.

“We all looked up to him with respect as a man of experience. He wanted to serve the Lord at his altar,” Father Largaespada said. “He was born into a family of Baptist preachers. He used to say that he converted to the Catholic faith by a book that hit his head.”

That book was Bishop Fulton Sheen’s “The Life of Christ” and it had been given to him by the priest who prepared him for marriage in the Catholic Church. The priest had asked him if he had considered becoming Catholic and he had replied that maybe another time, Father Largaespada recalled.

“The priest gave him the book and it was put away until it came out by God’s grace and hit him on the head. He read the book and then began his process of conversion,” Father Largaespada said.

That priest was Father Anthony Mulderry, All Saints’ founding pastor, who served there from 1982 to 2004. “I was the guy who sort of walked him into the Church” and later recommended him for the diaconate, Father Mulderry said. He also preached at Father Musselman’s first Mass and anointed him hours before his death.

“He was a good priest, I’ll tell you that. When he worked for me, he was very dependable, faithful and faith-filled,” Father Mulderry said.

“He’s gone to the presence of God to reunite with his wife, family and those he ministered on this earth as a deacon and priest of God,” said Father Largaespada. “May the Lord receive his soul and lead him to the eternal reward.”

Father Musselman is survived by his daughters, Karina and Kelly, and three grandchildren: Brandon, Brenda and Jaxson. He will be buried at Our Lady of Mercy Cemetery, Doral, immediately following the funeral Mass.

Randy Pechin - 02/25/2020 06:59 PM
Our deepest condolences to the Family. I knew Randy as an employee at Coulter. He was a good, hard working gentleman who was respected by all. May he rest in peace.

Diane Mulberger - 02/23/2020 03:32 PM
I was a member of All Saints since its inception. Always looked up to then Decon Randy and his wife Terry as faithful members of our church community. Was so delighted when he became a priest and visited his parishes a few times.We moved to Central FL just a week before he became pastor of All Saints. I would have loved to have him as my paster.I also am so Thankful that Fr.Tony was with him. GOD rest his soul.