CORAL GABLES | Catholic medical professionals and students now have a support group they can turn to as they face the ethical challenges presented by today’s society.

“The practice of medicine for Catholic doctors is difficult, because there’s a lot of secular influences,” said Father Alfred Cioffi, chaplain of the Miami Guild of the Catholic Medical Association. 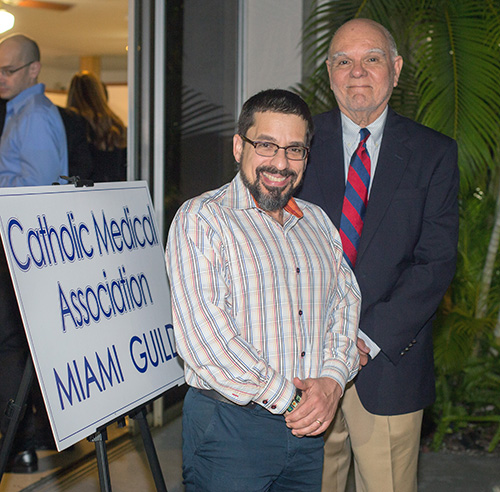 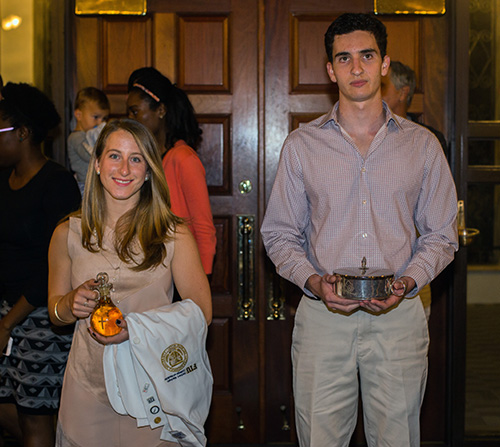 Ashley Mila, an FIU medical student, and Victor Moas, president of the University of Miami chapter of the Catholic Medical Association, bring up the offertory during the White Mass for medical professionals celebrated Nov. 13 at St. Augustine Church and Catholic Student Center in Coral Gables. 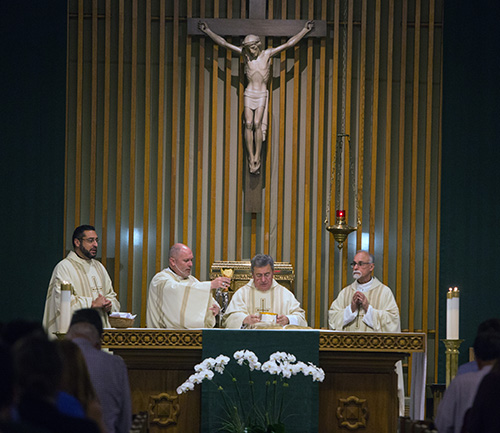 He delivered the homily at a White Mass for medical students and professionals celebrated Nov. 13 at St. Augustine Church and Catholic Student Center, which is adjacent to the University of Miami. “There’s a temptation to compromise on our values.”

Father Cioffi is the director of St. Thomas University’s Institute for Bioethics, and its Florida Blue Endowed Chair in Bioethics and STEM. Bioethics is the study of ethical, social, legal, philosophical, and related issues arising in health care and the biological sciences.

“Bioethics can be described as what can be done with regards to science and technology today,” said Father Cioffi. “The distinction between ‘can’ and ‘may’ is not just a grammatical distinction, but an ethical distinction; because we can do many things technologically, but should we do them.”

Father Cioffi said that the Catholic Medical Association in South Florida is growing little by little.

“The other dioceses in the state had guilds,” he said. “This group has been a long time in the making. A group of medical professionals started meeting in the 1990s. In 2011, Father Scott Francis Binet, M.D., helped us to incorporate. One of Father Binet’s responsibilities was to promote the establishment of CMA guilds in the southern states.”

Dr. Felipe Vizcarrondo, a retired pediatric cardiologist, is president of the Miami Guild.

“This group is a manifestation of our faith,” said Dr. Vizcarrondo, who teaches bioethics at UM. “We meet every other month and talk about our mission and what we plan to do.”

The FIU Herbert Wertheim College of Medicine, which opened in 2009, recently formed a CMA chapter. The White Mass, which got its name because medical professionals wear white coats, helped kick off the chapter. Several FIU medical students joined members of the University of Miami CMA chapter at the Mass.

“We old folks need your vitality,” Father Cioffi told the medical students. “We’re counting on you, whether you’re at FIU or the University of Miami. Our faith is under attack. That’s why you have to be on your toes and show the American people we are agents of healing.”

Miguel Gonzalez, president of FIU’s CMA chapter, said he was excited about the new group. “It’s an opportunity to deepen our Catholic faith in our profession.”

Belle McDermott and Tim Brown, from Nova Southeastern University College of Osteopathic Medicine, also joined the UM and FIU medical students. They don’t have a chapter there â yet.

“We have a group of pro-life students at Nova,” he said. “Maybe we will start a CMA group at Nova.”