'I accompany them to their death telling them about Jesus' 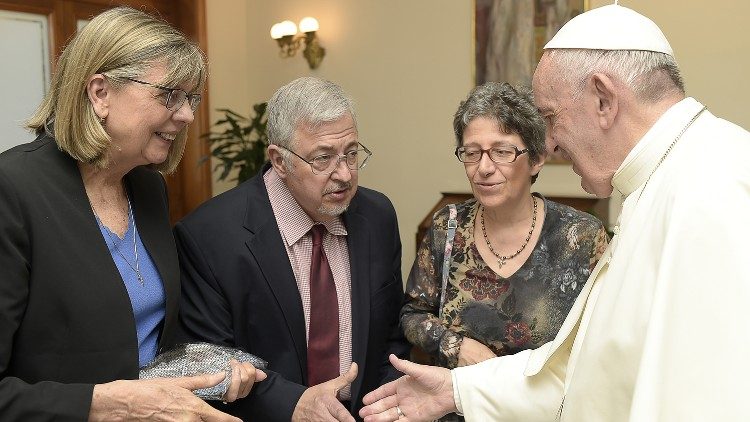 Dale Recinella and his wife Susan, left, meet with Pope Francis at the Vatican.

This article was originally published on the Vatican News website June 19, 2019.

ROME | How does a successful Wall Street lawyer, Notre Dame Law School graduate, and owner of a Miami Bay penthouse, leave everything in order to offer spiritual assistance to people sentenced to death in Florida prisons, the second largest Death Row in the United States, after California?

We wanted to find out more about his personal story, his commitment to abolishing the death penalty, his book, “When we visit Jesus in prison” (ACTA Publications, Chicago), and why prisoners call him their “Brother.” So we organized a meeting at Rome’s Rebibbia Prison, where we interviewed him.

From Abruzzo to the American dream

Dale Recinella doesn’t immediately reveal his Italian Abruzzi origins, or the fact he is the son of immigrants from Castel Di Sangro. Instead, he offers us his business card complete with personal details and a brief description of his activities as a “lay chaplain.” His wife, Susan, accompanies him in his ministry, assisting families of prisoners held in U.S. penitentiaries.

When we mention his book, Recinella tells us he wanted to dedicate it to the thousands of men and women God has allowed him to serve in prison, and to the hundreds of volunteers who have supported him during his 30 years of service.

Before embarking on that mission of service, Recinella perfectly embodied the American dream. He was earning a lot of money, he led a fast-paced life, and went through several marriages – until illness forced him to stop and reflect. He asked God for another chance. And he got it. That was the turning point.

The story of Sacco and Vanzetti

Our first question is: Why Death Row?

He hesitates a moment before answering, and then explains how his parents were affected by the execution of Sacco and Vanzetti, two Italian-born Americans who were accused of murdering a guard during an armed robbery in 1920. Both men died on the electric chair Aug. 23, 1927, in the Charlestown State Prison in Massachusetts. Recinella says his parents were shocked by the execution — and that’s how he was inspired to take care of people on Death Row.

The people on Death Row

His voice changes when he describes what “taking care of people on Death Row” entails. His mood becomes darker as he outlines the details of Florida prison protocol:

“When the death warrant is signed, the man or woman is moved from Death Row, where the cells are, to a place called the Death House. The cell is just like the other Death Row cells, except that it is located just 10 feet from the execution chamber.”

He goes on to describe what happens next: “The condemned person will be in that cell for five or six weeks. If the condemned person has asked me to be his spiritual advisor, I will be allowed to be with him for at least 12 hours each week. If his family is coming to say goodbye, then they will also meet my wife Susan, who will be available to be with the family during the execution. The corridor where the Death House cells are has a door at the end that goes to the execution chamber. Every man has told me that, psychologically, it feels like that door gets closer every day.”

The day of execution

“On the day of the execution the man’s family is allowed to hug him and say goodbye. Then at 11 a.m. he has his last meal and at 12 noon the priest comes for the last rites. I am usually with him from when the priest leaves until almost 4 o’clock. This is when he gives me his last messages for his family. Also, this is when there have been some very moving moments between me and the man who will be killed. One man said: You have been the father I never had. Another said: You have been the brother I never had. I remember one man said: If I had a friend like you before I came here, I might never have come here.”

Recinella continues: “At 4 o’clock, the strap-down team comes and takes him to be prepared for the gurney.”

According to Recinella, executions are prepared with chilling efficiency: the last meal is ordered, the final visits are organized, the names are selected of those who will witness the execution from behind a glass wall.

The “effective and compassionate technique of lethal injection” (as those who support the death penalty call it) is applied as the preferred method of execution. Since its introduction into the U.S. judicial code in 1972, and its first application in Texas in 1982, doubts and controversies persist concerning how “effective and compassionate” lethal injections really are.

Recinella describes how he has to join the official witnesses in the witness room. He always says the same thing to the person about to die: “Look through the glass at someone who loves you: keep your eyes on me.”

We ask him how many executions he has witnessed. “Even one is too many. But I have witnessed 18. I have in fact been on death watch 36 times because frequently the man may have a priest or Protestant pastor from his childhood who is coming for the last two days. But the priest or pastor cannot come for the whole six weeks, so I cover the five or six weeks and then his pastor comes for the last two days.”

The memories that never go away

Recinella goes on to tell us some of the stories he knows he will never forget:

“Because I get so close to the man in assisting him in preparation to be killed, all of them are in my heart. But a couple of them had special situations. For example, one had three daughters in their 20s that Susan was caring for. They were extremely distraught that their father was going to be killed, and also it was highly likely that he was innocent.”

The next story is so painful, Recinella has to stop now and then to catch his breath. “He was Puerto Rican and widely believed to be innocent. His lethal injection was botched. I watched him writhe in agony for half an hour as he died.”

An autopsy later revealed that the injection poison had ruptured his veins and ended up in his arms. This caused internal chemical burns and he didn’t die. Instead, he must have felt as if he was drowning or suffocating. He twisted and turned so much that he broke the straps holding him down on the cot. In the end, they had to tie his head.

“When I was driving home from the execution, I called my wife and I told her on the phone: I just watched a man be tortured to death.”

The meeting with Pope Francis

Our interview with Recinella concluded with him expressing his excitement over being able to meet Pope Francis at Mass in the Holy Father’s chapel at Santa Marta. He intended to tell the pope about the work they are doing to abolish the death penalty. He also intends to invite Pope Francis to visit Florida — and Death Row — so the Holy Father can see for himself the faces of these our “brothers.” The faces of all the victims he has known are in a book that Recinella carries with him at all times.

Before leaving, we both realize we haven’t asked him the most important question of all: Why does he do it? “Because whenever we go to prison to see someone, we meet Jesus.” 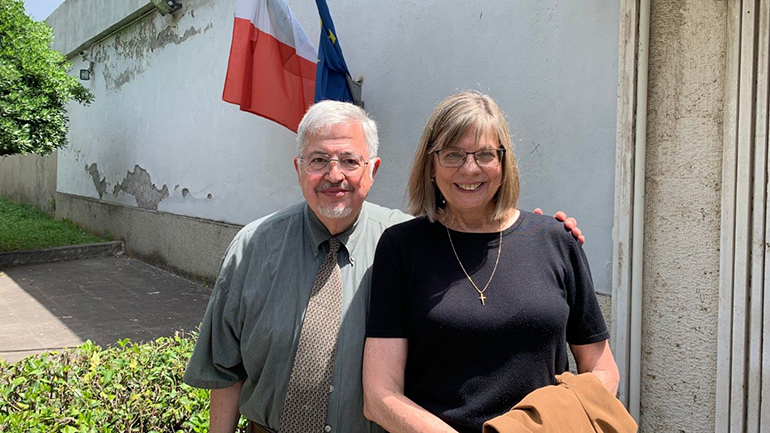 Dale Recinella poses with his wife Susan, who is also involved in the ministry to Death Row inmates.