Compassion, with a touch of magic

St. John Bosco Church has been a pillar of Miami's Little Havana since its founding in 1962.

Over the chancel is a mural, known as Christ of the Immigrants. The Bible verse says in Spanish, "Come to me, all you who labor and are burdened, and I will give you rest."

Statue of the church's patron saint takes a place of honor at its chancel.

Mary, as Our Lady, Help of Christians, is represented in a statue at the chancel. She was the patron of a church St. John Bosco built in Turin.

Mary and the disciples are filled with the Holy Spirit in this window at the left transept of St. John Bosco Church.

The ascension of Jesus is the theme of the right transept at St. John Bosco Church.

Mary's spreading gown identifies her as Our Lady of Charity, patroness of Cuba and its people.

St. Francis de Sales looks to Mary in this window at St. John Bosco Church. Bosco named his society after the 17th century bishop of Geneva, and the group became known as the Salesians.

St. Joseph Calasanz guides youths in this window. Like St. John Bosco, he dedicated his life to educating poor children.

St. Jude shows an image of Jesus in this window at St. John Bosco Church. According to legend, he carried the image to Edessa, where it healed the king of an illness.

St. Joseph embraces the young Jesus in this window at St. John Bosco Church. His flowering staff stems from a legend about his first meeting with Mary.

An infant Jesus raises his hands in blessing as The Divine Child, a popular devotional image for Colombians. The original, at a church in Bogota, actually wore a pink tunic.

Rays of light stream from Mary's hands as Our Lady of the Miraculous Medal. The medal is based on 19th century appearances of Mary to Sister Catherine Laboure in Paris.

Blood and water flow from Jesus in the Divine Mercy window at St. John Bosco Church. The image is based on an apparition seen in 1931 by a Polish nun, St. Maria Faustina Kowalska.

A suffering, purple-clad Christ is bound with cords in this window at St. John Bosco Church.

St. Mary Mazzarello, founder of the Salesian Sisters, is honored in this window at St. John Bosco Church.

Our Lady of Mount Carmel and the Christ Child hold the Carmelite scapulars, emblems of a service order.

One of two Angels of Glory guards the chancel in the chapel. The banner inscription is Latin for 'Behold the bread of angels,' a reference to the Eucharist.

The other Angel of Glory in the chapel holds a censer.

The archangel Michael, clad in Roman-style armor, chains Satan in this statuette, as the Bible says he will on Judgment Day.

A red-haired Mary Magdalene stands beside a jar of perfume, following a belief that she was the woman who anointed Jesus' feet.

Our Lady of Coromoto, patroness of Venezuela, is the subject of this window in the chapel at St. John Bosco.

Jesus returns a lost lamb to the fold in this window in the chapel.

Statuette of Our Lady of Charity, the patroness of Cuba, greets worshipers in the narthex. St. John Bosco has been a refuge for many refugees from that island and elsewhere.

A supergraphic is emblazoned on a wall at the Leadership Learning Center, the neighborhood educational outreach of St. John Bosco.

Mural of flowers and a rooster take up a wall of the court at the Leadership Learning Center, the neighborhood educational outreach of St. John Bosco.

MIAMI | St. John Bosco merged kindness, creativity and determination to lift boys out of hunger, poverty and ignorance. The 19th century priest drew them with magic shows, then preached the Gospel and said Mass for them. And his Society of St. Francis de Sales – better known as the Salesians – continues to do so in many lands.

Born in 1815 in Becchi, northern Italy, Giovanni Melchiorre Bosco lost his father at the age of 2. His mother raised him and his two older brothers.

John proved both devout and hard working, attending church and raising sheep for the family. He also learned from his mother’s example in sharing with the homeless who sometimes came for food, clothing or shelter. 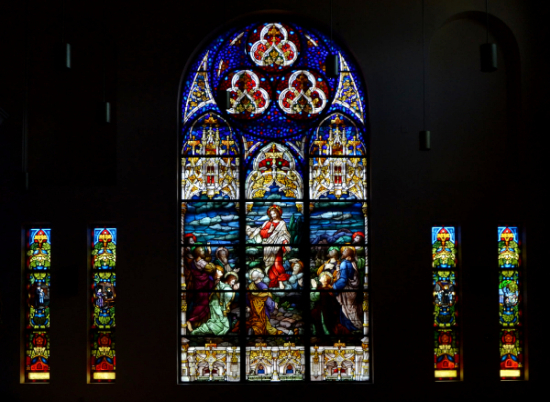 The ascension of Jesus is the theme of the right transept at St. John Bosco Church.

As a preteen, he had a dream or vision in which a voice said: “Not with blows, but with charity and gentleness must you draw these friends to the path of virtue.”

Soon after, John saw a troupe of circus performers and was fascinated by their magic shows. He learned their tricks, then began performing for his friends. He followed each show by reciting the homily he'd heard that day, then leading a prayer. He sensed a calling to ordination.

John borrowed books from a friendly priest, then left home at 12 to become a hired farmworker. After two years, he met Joseph Cafasso, who encouraged him and later supported his street work. Cafasso himself became a priest, then was named a saint.

John entered the seminary at Cheri and was ordained in 1841. His first assignment was Turin, where he was shaken to see boys as young as 12 working in factories and languishing in prisons.

Building on his talents, he performed street magic, then preached. He also spent much time finding work and lodging for boys who needed it. In less than five years, his youthful congregation numbered 400. 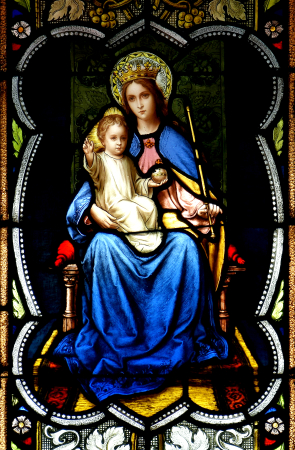 Our Lady of Coromoto, patroness of Venezuela, is the subject of this window in the chapel at St. John Bosco.

Don Bosco, as he became known, negotiated agreements for apprentices, who were often beaten and not allowed feast days off. He often took the boys on Sunday walks around the countryside, including games, a meal, Mass and catechism. And realizing the attraction of music, he obtained old musical instruments and formed a band.

As the ministry began drawing workers, Don Bosco in 1859 organized the Society of St. Francis de Sales, named for a 17th century bishop noted for his zeal and kindness.

Don Bosco’s work gained valuable female allies, too. One was his mother, dubbed Mama Margaret by the youths she fed at the shelter. Another was Mary Mazzarello, who founded a female version of the Salesians: the Daughters of Our Lady Help of Christians. She was named a saint herself for her work.

Their efforts grew into a chapel, a grammar school, a playground, and a vocational school for jobs cobbling and carpentry. Don Bosco later founded a church with donations, dedicating it to Our Lady, Help of Christians.

He developed what he called the “Preventive System” of education, based not on punishment but reason, religion and personal relationships. His simple spirituality blended work, play, virtue, devotion and encouragement.

“Don Bosco often told his young people that being a saint was easy,” according to a biography. “His holiness was attractive because it was rooted in charity and exceptional purity that drew people to him.”

The Don worked obsessively, not only with Salesian matters but in writing: asking for donations, comforting those who asked for his prayers, writing monthly pamphlets on faith and morals, writing books on math, literature and Church history. He also accepted frequent requests as a guest preacher.

By his death in 1888, Salesians were serving in England, France, Spain and around South America. Today, they work in more than 130 countries, at prisons, hospitals, asylums, schools for children, printing presses, vocational schools for adults, and other fields. 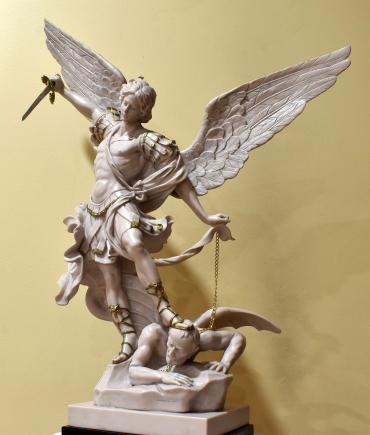 The archangel Michael, clad in Roman-style armor, chains Satan in this statuette, as the Bible says he will on Judgment Day.

St. John Bosco was canonized in 1934. He is the patron of boys, apprentices, editors, publishers, educators, schoolchildren – and, of course, magicians. St. John Paul II also declared him the Father and Teacher of Youth. His feast day is Jan. 31.

He might well have been pleased to see his namesake church in Miami. Sitting in East Little Havana, St. John Bosco Church was founded in 1962 to serve refugees from Castro’s Cuba. Over the decades, the church has also embraced those fleeing turmoil in Nicaragua, Honduras, El Salvador and elsewhere in Central and South America.

At first, the church worshiped along with a priest from Spain, meeting in a garage. The following year, then-Bishop Coleman F. Carroll appointed as pastor a fellow refugee: Father Emilio Vallina, one of dozens of priests expelled by Castro. He served at St. John Bosco 43 years, retiring in 2006 and passing away in 2013.

Under Msgr. Vallina, the congregation worshiped at the Tivoli Cinema, then a vacant car dealership at Flagler Street and 13th Avenue. Volunteers cleaned away oil and sawdust, and by 1965, the church was ready for worship.

The new parish opened a free clinic for poor and undocumented immigrants. The St. John Bosco Clinic has since moved to the grounds of Corpus Christi Church, also in Miami.

In 1986, the monsignor began a fund drive for a new church, which was dedicated in 2001. Over the chancel is a mural, “Christ of the Immigrants,” showing a dark, curly-haired Jesus opening his arms in welcome. Clerestory windows depict the seals of nations where parishioners were born, plus emblems of groups such as the Knights of Columbus.

Parishioners have held programs such as day-long retreats and an “Evangelization through Liturgy” outreach. They take part also in a prayer group, a Cursillo group, visits to the sick, and Emmaus groups for men and women alike.

Carlota E. Morales - 01/18/2022 10:17 PM
Memory is the gratitude of the heart. I will be remiss if I fail to thank Bishop Carroll and Msgr. Vallina for a wonderful compromise with the Cubans and all other communities that found a home in La iglesia de San Juan Bosco. May your legacy continue and never be forgotten! Carlota E. Morales