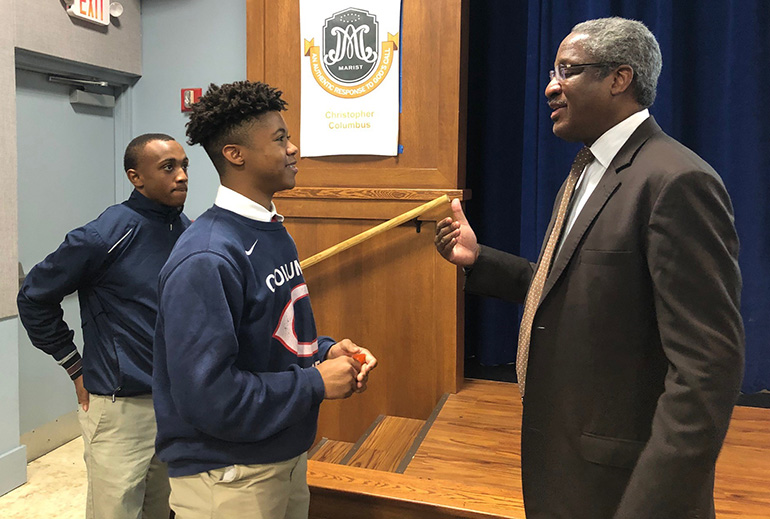 Kicking off the series, which lasted throughout the month of February, was Miami attorney Brandon Rose, who volunteers in youth development including with Lawyers for Children. Other speakers were Ernest Taylor Jr., a retired Navy pilot and Delta captain; LaTessa Hall, a retired Air Force major and certified meeting professional; and Albert Dotson Jr., real estate attorney and vice chair of 100 Black Men of America, Inc. Patrick Coggins, education professor at Stetson University, concluded the series March 6.

Senior Jeramy Passmore, who is African-American and introduced Rose, said he gained insights from all the speakers as he prepares to attend Indiana University on a football scholarship. “They all did a really good job in portraying their views,” Passmore said, adding they came across with the same message: “Continue to push for greatness, be a great leader and just be yourself and stand out wherever you are, and good things will come from that.”

The tall, soft-spoken athlete, whose grandfather’s football career ended with injury, also appreciated the focus on perseverance. “Throughout life you are always going to have obstacles that you’re going to face but you shouldn’t let that take you off your track or move you to the side. You should always keep pushing for other ways to motivate yourself and stay motivated so that you can accomplish your goals,” Passmore said. 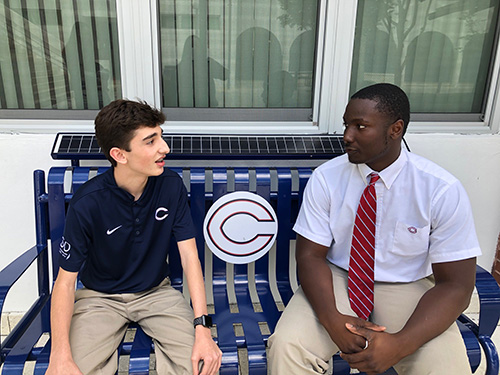 NOT JUST A DAY

“We were looking to really take the whole month, not just a day, not just the MLK day but the Black History Month, and take that speaker series that FIU is having and bring it over here,” Trujillo said. “In this school (African-Americans) are the ones who always have to fit into the Hispanic role. It feels good, almost like they had ownership of it.”

Trujillo said he had been inspired while on a family trip to the National Museum of African-American History and Culture in Washington, and encouraged by his mother, who is of Puerto Rican heritage. Moreover, his adopted son, who is African-American, overcame great obstacles having shuffled through over 15 foster care homes.

“My mother always was questioning why can’t we do more, whether it be for kids in foster care or minorities. My mother is the backbone of this,” Trujillo said.

Many speakers discussed vulnerability, after having to project facades as minorities in elite universities. Columbus is an all-boys school.

“I think sometimes as men we’re taught you don’t share, we don’t speak about problems,” said Trujillo. He noted that a lot of the speakers said they grew stronger once they allowed themselves to be vulnerable.

“It took until years later to face that vulnerability and become more willing to ask for help and build a network with good people around them of any race,” said Trujillo, who is also planning a civil rights course.

During the series, Trujillo discovered that speakers Dotson and Hall were siblings. Another surprising highlight was having Dotson thank him for his father’s kindness and mentorship in having hired him in 1976 at Sears. 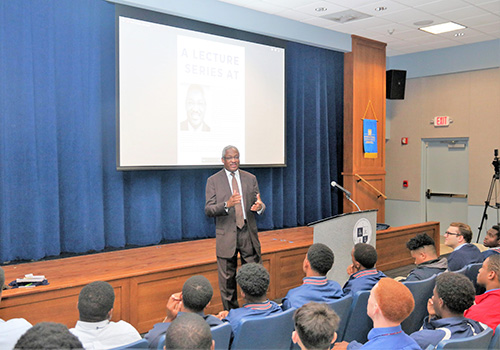 “I had no idea,” Trujillo said. “Mr. Dotson has been so successful but for him to take the time to recognize something that took place 40 years ago I think shows his character.”

Speakers also discussed overcoming obstacles, whether from race or gender. “One of the constant themes that kept rising out of this is not letting a negative situation affect the next 40 or 50 years of their lives, whether it be a derogatory term, whether it be people saying no you can’t do this,” Trujillo said.

Dotson told Columbus’ students about being called the n-word in high school and using it as motivation. “He flips it from a negative to a positive — I’m glad that happened to me because I learned from it,” Trujillo said.

Freshman Harrison Dunbar, of Cuban and German ancestry, said he was inspired by attorney Rose’s reflection on his parents’ love and sacrifice. “His dad gave up everything for him. His parents would risk it all for him,” Dunbar said. “It made me look at life and see how grateful I am,” not only for material possessions but for family.

Dunbar also liked Rose’s focus on work ethic, which carried him through Yale University. “He always worked hard in high school and college and never gave up,” he said. “He had to overcome some obstacles but met a lot of people along the way who helped him in life and made him see the way.”

Passmore said he felt encouraged by the community leaders to be strong in his beliefs. “You can’t let your ethnicity, friendships with people of different backgrounds, get in the way of stepping up and being a leader,” he said. “Because sometimes if you’re different than someone you have the tendency not to speak, you’re not as comfortable with them. But you should really open up and go after what you want and communicate with people more, and that will help set you up for better things in life.”

Passmore is heartened by Columbus’ growing African-American presence and multicultural spirit. “It’s a brotherhood,” he said. “I’m really excited about the future of this program. This is only the beginning.”

Trujillo also dreams big. “The great thing about it is word has already spread and we already have two or three speakers for next year,” he said. “The number one thing I enjoyed was kids leaving the media center saying I loved the speaker, thank you.” 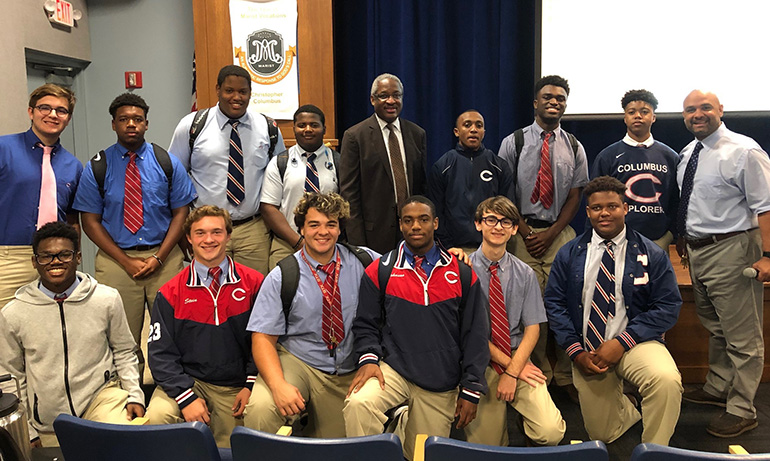 Albert Dotson Jr., real estate attorney and vice chair of 100 Black Men of America, Inc., poses with some of Christopher Columbus High School's students during a visit and talk at the campus for Black History Month. At far right is social studies lead teacher Alex Trujillo, who felt inspired to start the lecture series.