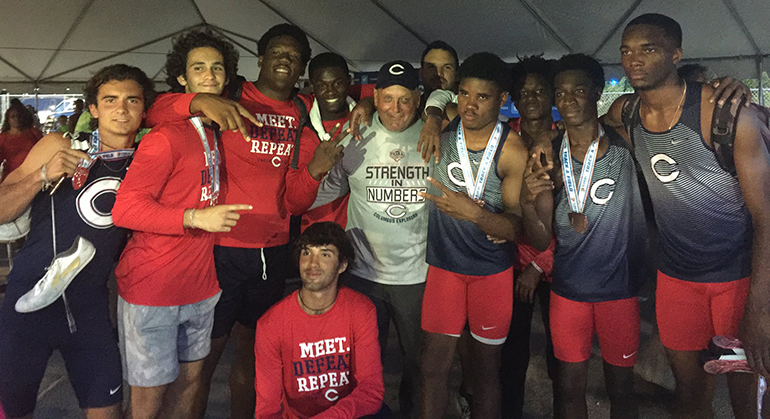 Columbus' track and field team, shown here with coach Fred Foyo, repeated as Florida Class 4A champions. Foyo was named Co-Coach of the Year for track and field for the second consecutive year by the Miami Herald.

Henderson and Daniel combined to deliver 27 points, and the 4x400 relay team finished just well enough to hold off Piper and Flagler Palm Coast and defend its Florida Class 4A Track and Field State Championships.

The Explorers finished with 45 points, followed by Flagler Palm Coast’s 41 points and Piper’s 33.

Columbus coach Fred Foyo said the Explorers have always had distance runners and field-event athletes. The difference this year is that they have more sprinters.

To do that, Foyo returned to the football team’s coaching staff. A side benefit of coaching on a state football finalist was that he was able to recruit football players to the team.

“Once we started getting those back, it made all the difference,” Foyo said. “A coach is only as good as his athletes.”

He then hired James Hardwick, a longtime track coach at Miami Jackson High, to coach the Explorers’ sprinters. “He’s a sprint guy,” Foyo said. “He’s got the kids believing in the 400 and doing things the right way.”

Henderson said that Hardwick is one of the best track coaches in Florida. “He helped develop my speed, tweak me on my form. It’s all about the form.”

The weather took a 2-by-4 to the meet, changing the schedule of the field events and reducing the 200 to a timed final. Henderson said keeping focused helped him handle the distractions.

The Explorers’ 4x800-meter relay team of Nicolas Arkala, Kevin Kergean, Malcolm Brown and Sebastien Cantave took second in 7 minutes, 54.71 seconds, just behind champion Oviedo and ahead of third-place Flagler Palm Coast. That started the push toward a title.

Gary Cooper, a senior who will play tight end on the Indiana University football team in the fall, added more points with a fifth-place finish in the shot put. He posted a 50-foot-6 ÃÂ¾-inch mark. That gave Columbus 12 points entering the heart of the running schedule, just behind Flagler Palm Coast’s 18 points.

Henderson and Daniel, who will run track at Florida State University next year, helped Columbus pass Piper in the 400. Henderson won in 46.77, while Daniel took fourth in 47.68.

The Explorers caught a break when Flagler’s Nathan Farrell was disqualified in the 300 hurdles preliminaries. Had he equaled his season-best of 36.70 at the state meet, he would’ve gotten 10 points to add to teammate Ken’Deric Morton’s sixth-place finish, which might have made Flagler Palm Coast uncatchable.

Columbus made a break at season’s start when it chose to add the 200 to the events in which Henderson and Daniel competed. “When he asked me to pick up the 200, it was a big job,” Daniel said. “I’ll do whatever I can do to help the team and not let them down.” Henderson had been asked last year to run the 200. He said working on the 200 helped him in the 400, his better event.

That move paid off late in the state meet, when Columbus passed Flagler Palm Coast in the 200. Henderson took second in 21.57 and Daniel took fifth in 21.95 to tally 12 points, while Flagler received no points in that event.

Henderson said he and Daniel set a goal to finish top four at the state meet. He said his victory in the 400 surpassed expectations.

All Columbus needed to clinch the repeat title was to finish one place behind Flagler Palm Coast in the 4x400 relay. The team of Sebastien Cantave, Henderson, Courtney Holmes (coming off an anterior-cruciate-ligament tear in his knee) and Daniel took third in 3:16.72. Piper won and Flagler took second. Foyo said the Explorers took third despite a bad baton exchange on the final exchange.

“I feel like we’ve always had a strong command (of the 4x400), but there are some points we could’ve gotten better,” Daniel said. “In my years at Columbus, we have gotten better.”

Foyo said that the Explorers’ chances of a three-peat are strong after runner-up finishes in 2009, 2010 and 2017 and a third-place finish in 2011. Henderson is back, as are other Elijah Roberts in the shot put. The Explorers return three of the four legs on their 4x400 and 4x800 relay teams. Tristan Dodge, who also qualified for state in the high jump, also returns.

“Having speed is a superpower in football,” Henderson said. “You can change the game with speed.”

After building up the sprints the last few years, Foyo said he’ll try to build the field-event depth.

“We’ve always tried to build the team around the 4x800, because it’s the first event,” Foyo said. “If you develop 800-meter kids, you can develop 400 and 2-milers. You try to coach the whole team. We have some pieces coming back. We’ll get hit hard next year by graduation. Track is a tough sport. Everything’s gotta go your way.” 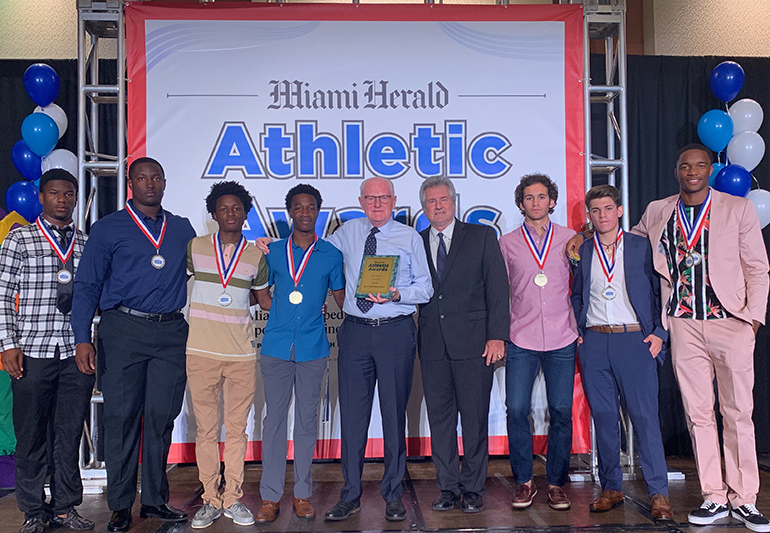 Columbus athletes and coaches pose at the Miami Herald All Dade Breakfast, where all First Team All-Dade athletes, scholar athletes and coaches were honored. Athletic Director Chris McKeon and the whole program won the 9A-7A boys' major sports award after defending the school's track and field state title, finishing as state runner-up in football and winning the Greater Miami Athletic Conferences in both baseball and soccer. In all, Columbus had 24 student-athletes recognized including Henry Parrish, Jr. (Football Offensive Player of the Year), Nick Regalado (Pitcher of the Year), Nicholas Suarez (Scholar Athlete) and Gary Cooper (Athlete of the Year Finalist).