Despite pandemic, rebuilding projects in Florida Keys are moving along 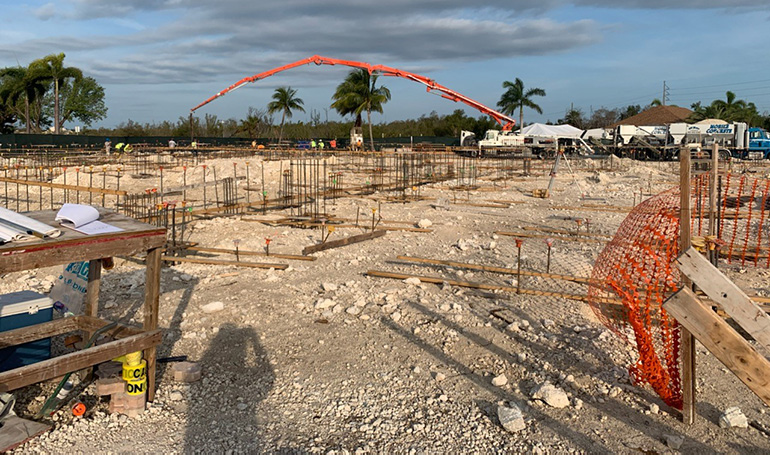 Early in the morning of May 7, 2020, an extended pump truck creates a rainbow over St. Peter Church in Big Pine Key, as it begins pouring 347 cubic yards of concrete to form the foundation for a new church. The old one was damaged by Hurricane Irma in 2017. 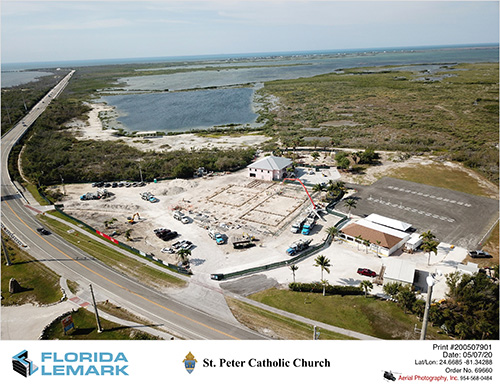 Aerial view of the grounds of St. Peter Church in Big Pine Key, taken May 7, 2020, when a concrete foundation was poured for the new church. The pink building in the middle is the ministry center which, before the pandemic, was being used for daily Masses and weekend Masses in the slow summer season. In winter, Masses were held in the enclosed outdoor pavilion at bottom right. 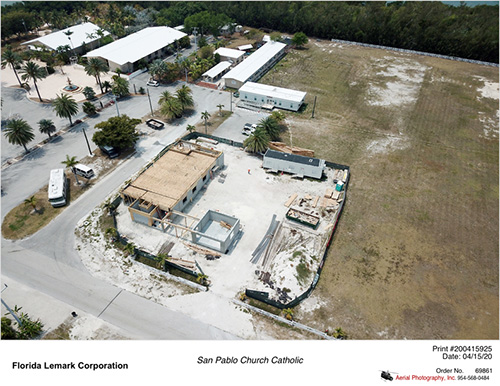 Aerial view, taken April 15, 2020, of the new rectory and office for San Pablo Church in Marathon, which is being built to replace the one damaged by Hurricane Irma in 2017. The church, which was not damaged, is visible at top left.

MIAMI | A rainbow hung over St. Peter Church in Big Pine Key May 7, 2020. But not the multicolored kind that comes after a storm.

This orange-only rainbow was created by an extended pump truck pouring 347 cubic yards of concrete to form the foundation for a new church, being built to replace the one damaged by Hurricane Irma in 2017.

David Prada, senior director of the archdiocese’s Office of Building and Property, called the orange rainbow “a true symbol of hope and joy.”

While the coronavirus pandemic has halted most businesses in South Florida, construction has continued apace.

On April 21, 2020, another batch of concrete was poured at San Pablo Church in Marathon to create the second floor of its new rectory and office, which also required rebuilding as a result of Irma. The first floor and walls had been poured at the end of March.

The photos show, Prada said, that “the shell of the new building (at San Pablo) is quite a secure concrete bunker.”

Aerial shots show taken by the builder at both sites, Florida Lemark Corporation, also show the new seawall being built at San Pablo.

“Please keep the project team and the project in your prayers,” said Prada. “St. Peter and San Pablo, pray for us.” 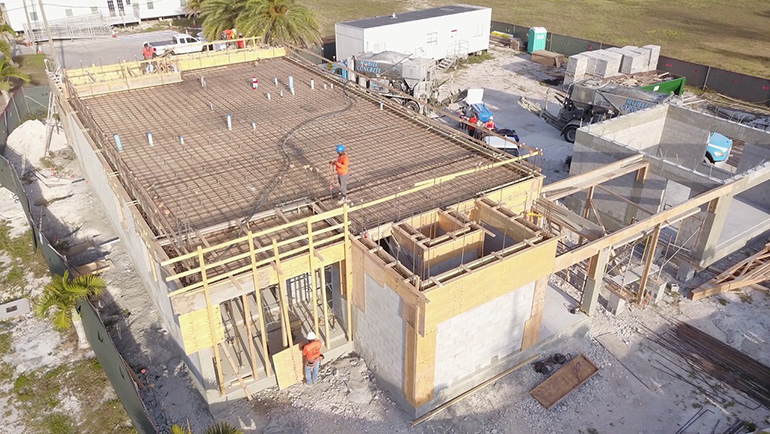 Workmen pour concrete to create the second floor of San Pablo Church's new rectory and office, April 21, 2020. The new construction is a result of the damages caused by Hurricane Irma in Marathon in 2017.