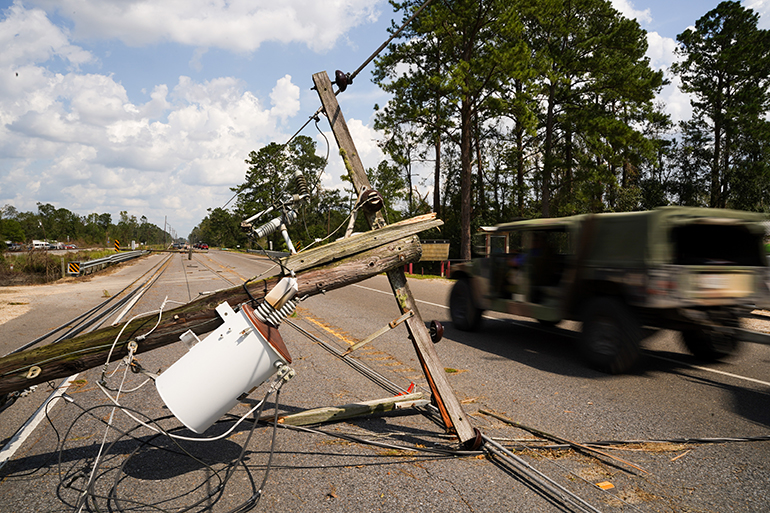 A vehicle passes downed power lines on Sept. 1, 2021 in Albany, Louisiana, one of the parts of Louisiana where Ida made landfall as a Category 4 hurricane Aug. 29, 2021, bringing flooding, wind damage and power outages along the Gulf Coast. (Photo by Sean Rayford/Getty Images)

MIAMI | A scattering of Hurricane Ida evacuees coming from storm-battered Louisiana to neighboring states across the south, including Florida, is presenting a familiar crisis for regional Catholic Charities agencies following the storm’s Aug. 29, 2021 landfall.

“Houston has a very large number of evacuees, Florida has some, and north through Arkansas, which is pretty common,” said Gabe Tischler, emergency management specialist for the Florida Conference of Catholic Bishops.

Tischler was on a Sept. 1 conference call set up by Catholic Charities USA during which dioceses in Louisiana and the Gulf Coast, from Texas to Florida, were all reporting power outages, an influx of evacuees and gasoline and water shortages.

The storm knocked out power, water and cell phone service — and even emergency medical care — throughout greater New Orleans and the Houma-Thibodaux area in particular. 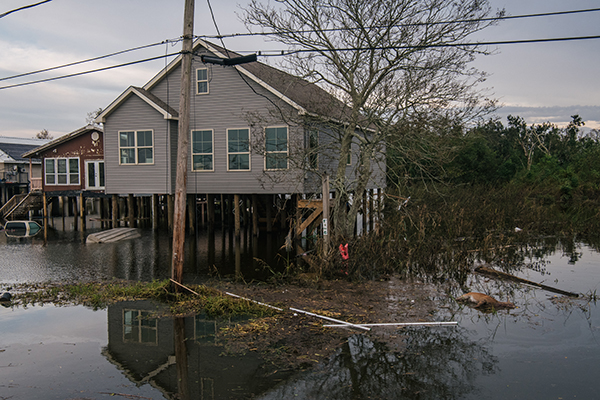 A deceased deer is shown in floodwater on Sept. 1, 2021 in Jean Lafitte, Louisiana. Jean Lafitte Mayor Tim Kerner has pleaded for help for residents of the small town, which is roughly 20 miles south of New Orleans. Many stores remain closed and services suspended as power throughout New Orleans and its surrounding region is down. Ida made landfall as a Category 4 hurricane on Aug. 29 in Louisiana and brought flooding and wind damage along the Gulf Coast. (Photo by Brandon Bell/Getty Images)

Earlier this week, Louisiana governor John Bel Edwards told Hurricane Ida evacuees it's too soon to return while more than one million homes and businesses in that state and in Mississippi remain without power.

Ida, the fifth-most-powerful hurricane to strike the U.S., arrived on the 16th anniversary of Katrina, which inundated 200,000 homes in New Orleans due to the failure of several flood-protection levees. Ida, by contrast, has had a catastrophic effect on the region’s power infrastructure, which in turn creates problems for water, sewage, gasoline supply, and communications. So far, five deaths were attributed to the storm in Mississippi and Louisiana.

Between flooding, wind damage and power outage, housing is going to be an issue for the next six to eight months following Ida, Tischler said.

Hurricane Ida, he added, will be remembered for its very strong, focused eyewall, not unlike the category 5 Hurricane Michael, which hit the Florida Panhandle in October 2018.

“They will get New Orleans up and running (with electricity) as soon as possible but my guess is it will take several months longer in outlying areas,” Tischler said.

Donations of goods and clothing are discouraged, he stressed, as they incur high costs associated with shipping and transportation. Also discouraged is “self-deployment” of well-meaning individuals or parishes thinking of driving into the New Orleans area at this time.

“Catholic Charities of Northwest Florida has taken up donations of specific items that they will truck directly over to one of the local Catholic Charities there, but that is not going to happen for a good week or two,” Tischler said. “I can’t stress this enough that the best way to help is to donate to Hurricane Ida Relief directly to Catholic Charities in your diocese or in other states.”

Tischler said that Lake Charles, Louisiana, and Biloxi, Mississippi, were identified as two areas that had warehouse space available to serve as regional staging and distribution centers. Catholic Charities of Northwest Florida, he added, has already provided some gift cards and transportation vouchers to evacuees in Florida.

Catholic Charities in Baton Rouge, which served as a regional disaster staging center after Katrina, may be called upon to do the same after Ida, although the area was not completely spared by the storm.

A number of Catholic Charities staff from the Baton Rouge Diocese have been left scrambling for housing and much of the area is without electricity while lines for gasoline are several hours long. Cell phone communications to the hard-hit areas remains spotty.

“That is impacting our ability to get out to the communities and the church parishes to do assessments and bring supplies,” said David C. Aguillard, executive director of Catholic Charities of the Diocese of Baton Rouge. “We are a little short staffed, due to the employees who were impacted. What we are doing now is gearing up for the long haul, to get mobilized and organized.”

The agency especially needs tarps for shelter and cash to purchase whatever is most needed in given communities, Aguillard said. “Some communities might need food and another community might need diapers, so cash is the most needed resource following a disaster,” he said.

The rainy remnants of Ida, meanwhile, resulted in massive flooding throughout the northeast, especially New York, New Jersey and Pennsylvania. The toll as of Sept. 2 included at least nine deaths in that area. Another death was attributed to the storm’s passage through Maryland.