'I'm leaving behind a part of me' 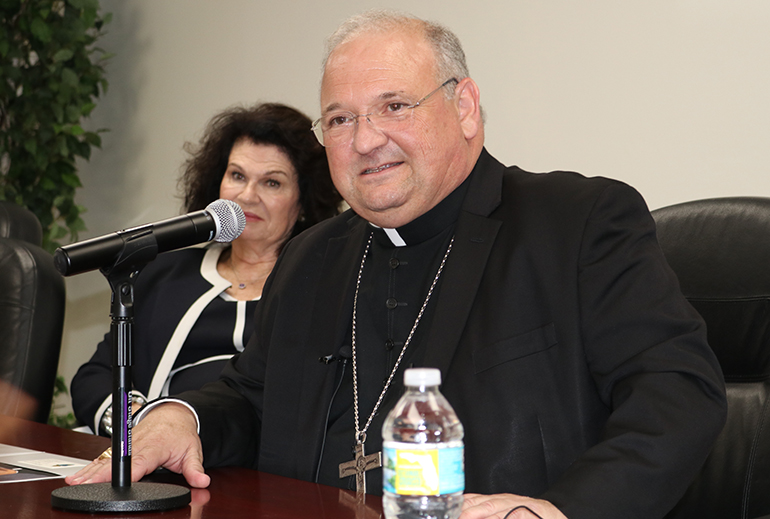 Miami Auxiliary Bishop Peter Baldacchino answers questions from the media May 16, a day after the Vatican announced he had been appointed the third bishop of the Diocese of Las Cruces, New Mexico. Behind him is Mary Ross Agosta, archdiocesan director of communications.

MIAMI | Bishop Peter Baldacchino described himself as “happy but also torn inside” at the news of his appointment as the third bishop of the Diocese of Las Cruces, New Mexico.

“I’m leaving behind a part of me,” he said during a sit-down with Miami media May 16. A day earlier he had been in Las Cruces, where his appointment was announced and he was introduced to his new flock.

Bishop Baldacchino has served as Miami’s auxiliary bishop since March 19, 2014. His installation in Las Cruces is set for July 23 at the Cathedral of the Immaculate Heart of Mary. He is the only Malta native and member of the Neocatechumenal Way — an “itinerary of Christian formation” — to serve as bishop in the U.S. In addition to his native Maltese, he speaks English, Spanish, Italian and Creole.

In Las Cruces May 15, he had begun his press conference — which was livestreamed by KVIA, the local ABC affiliate — by noting “the fantasies, the surprises that God has.”

A former technical manager for the Canada Dry bottling plant in Malta, he was chosen by lottery to study in Newark once he heeded the call to priesthood. From Newark he was sent to the Turks and Caicos, where he built a church in Providenciales and the only Catholic school on the island. From there he came to Miami, and now he is headed to New Mexico.

“God has a madness, a way of thinking that sometimes surprises us,” said Bishop Baldacchino, who will turn 59 in December and was ordained a priest May 25, 1996, for the Archdiocese of Newark.

In Miami, he will be leaving behind not just his duties as bishop but also as pastor of St. Kieran Church in Coconut Grove, where he is currently preparing 38 couples for marriage. He also had a first Communion this weekend in addition to confirmations throughout the archdiocese.

“Bishop Baldacchino has served us well,” Archbishop Thomas Wenski said. “We will miss him; but wish him well. He is a ‘missionary at heart,’ so I am confident that he will serve the people of Las Cruces very well.”

“I’m happy with the newness but I’m also torn inside,” Bishop Baldacchino told the Florida Catholic’s Miami edition. “There is pain in separation, like anybody leaving a family.” 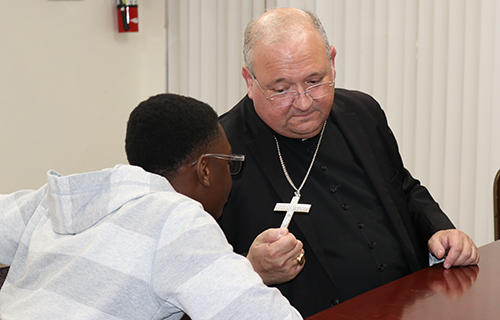 Miami Auxiliary Bishop Peter Baldacchino shows his pectoral cross to Bryan Williamson, a student reporter from St. James School in North Miami, who sat in on the press conference at the Pastoral Center May 16, a day after the Vatican announced the bishop's appointment to the Diocese of Las Cruces, New Mexico.

The happy part comes from indulging his missionary spirit. “My vocation to the priesthood started with a falling in love with the missionary aspect of the Church. So an outreach immediately presents itself as a possibility for falling in love again.”

And his experience in Miami has prepared him well. “My whole being is Miami now,” he said, explaining that “we absorb things without thinking. The situations form us, change us, open our perspectives.”

Whatever qualities or talents he has absorbed because of those experiences — qualities which Pope Francis perceived would make him a suitable shepherd for Las Cruces — will be revealed once he starts working with the people in his new diocese, he added.

“The Lord will inspire us how to become creative. If you’re sensitive to the needs of others, you will find a way to do something. If you aren’t sensitive, you will wash your hands and move on.”

Las Cruces has a flock of about 140,000 scattered over nearly 45,000 square miles of mountain and desert territory. Bishop Baldacchino noted it’s about 10 times the land size of the Archdiocese of Miami with a tenth of the population, which will make his job as bishop “100 times more demanding” in terms of moving from parish to parish.

His brief, 48-hour glimpse of that reality made him realize, he said, “how important the media is in bringing the message of Jesus Christ to remote areas.”

Las Cruces has 47 parishes and 44 missions, compared to Miami’s 102 parishes, 6 missions and 1 national shrine (Our Lady of Charity). The diocese encompasses White Sands National Monument, Alamogordo, and the UFO-linked city of Roswell. “I hope I don’t turn green,” the bishop joked.

The southeastern edge of the diocese borders El Paso, Texas, site in recent months of a record-setting influx of asylum-seekers, mostly families and children, from Central America. Many of them are dropped off in the area after being apprehended and processed by the Border Patrol.

Bishop Baldacchino said his understanding is that those immigrants do not stay in New Mexico but pass through on their way to join family members in other parts of the U.S. The diocese has a Project Oak Tree that provides them with lodging, clothing and meals, assists them with travel arrangements, and transports them to bus stations or airports.

“We will suffer with the people,” Bishop Baldacchino said, while echoing the statements of the U.S. bishops that current immigration law requires “a complete refurbishing.”

“Our brothers and sisters are hurting,” the bishop said. “How is it possible that in this day and age we have reached this point of insensitivity?”

He noted that he himself is an immigrant, and “I would like to think that we have done some good.”

Moreover, “all of us will immigrate to heaven,” he said, where we will be welcomed the same way we have welcomed others here on earth. “How do we want to be received when our time comes?”

Screenshot of the KVIA livestreaming of the press conference May 15 in Las Cruces, where Bishop Peter Baldacchino was introduced to his new flock. Seated, from left: Las Cruces' first bishop, now Bishop Emeritus Ricardo Ramirez, and Bishop Gerald Kicanas, bishop emeritus of Tucson, Arizona, who served as apostolic administrator of Las Cruces for the past eight months. The diocese's second bishop, Bishop Oscar Cantu, was appointed coadjutor of the Diocese of San Jose, California.

Corrected: Bishop Baldacchino's date of ordination to the priesthood was May 25, 1996, not May 26 as originally stated.

Other News from St. Kieran Church