Archbishop Thomas Wenski's statement on racism and violence in our communities

Archbishop Thomas Wenski issued this statement June 3, 2020, in response to the killing of George Floyd and the ensuing unrest throughout the country:

“Where do we go from here: Chaos or Community”: This was the title of Dr. Martin Luther King, Jr.’s last book, written one year before his assassination in 1968.  More than 50 years later, the question posed by the title of Dr. King’s book has lost none of its timeliness. America continues to deal with the sad legacy of racism as well as with growing social and economic inequality that has been exasperated by our throwaway culture and the globalization of indifference. As we face a health crisis, an economic crisis and a societal crisis, chaos cannot be an option. 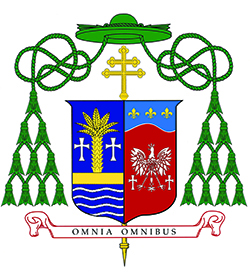 Coat of arms of the Archdiocese of Miami (left side) and Archbishop Thomas Wenski.

As Pope Francis said in his Wednesday audience of June 3, 2020:

“...we cannot tolerate or turn a blind eye to racism and exclusion in any form and yet claim to defend the sacredness of every human life. At the same time, we have to recognize that the violence of recent nights is self-destructive and self-defeating. Nothing is gained by violence and so much is lost.”

All Americans of good will are united in denouncing the unjustified killing of George Floyd. We also should be united in denouncing the deaths of those who lost their lives in the ensuing violence that has plagued our cities, including those police officers who were killed in the line of duty. America is at its best, when the rights of the weak and vulnerable are protected and not viewed as expendable. America is at its strongest, when all our institutions promote the common good and work for the advantage of everyone.

Today, America weeps. May her tears water a new flowering of liberty and justice for all.

Antonio Fernández - 06/08/2020 07:57 AM
Thank you Arch. Wensky for your most needed guidance and orientation in this moment. There is another issue that is severely diving our Church in this moment due to the letter that Arch Viganò apparently wrote to President Trump. In my opinion it is not clear is such letter is true or fake. However, what is a fact is the terrible offenses that it contains against some of your brother bishops of the USA. Numerous Catholics are sharing this letter and expressing very laudatory comments about Arch. Viganò and disregarding his previous attacks against Pope Francis. Please we need your guidance in this area as well. God bless you!

Charles Kane - 06/06/2020 04:30 PM
One of the worst forms of racism is the murder of black babies by white doctors for money (tax money) in abortion chambers. The ratio far exceeds white babies. Black unborn lives matter too.

Lilly - 06/05/2020 01:05 AM
I agree with Gustavo. I would add that being politically correct is not Christian. And like other commenters said, priests have to talk about racism. But above all that, they have to talk about abortion, and I have never ever heard a priest talk about it in Mass. Thousands of lives lost and not many care, or they are afraid of speaking about it. This year has been horrible, first the Coronavirus, then the death of Mr. Floyd and the riots, and now we just entered hurricane season. May God bless and protect Miami and the United States of America. Amen.

Gustavo - 06/04/2020 12:41 PM
Racism cant is eradicated because it's a sin. It can be diminished by repenting of our sins, receiving the sacraments worthily, trying to follow the precepts of the Church(pre-Vatican II), and trying to build back Christendom. Unfortunately, the world and many in the Church hierarchy no longer believe in sin or rebuilding a Christian society. As Venerable Archbishop Fulton J Sheen once said: there is something worst than sin, and that's the DENIAL of sin. As long as weak non-believing prelates are running the Church(many communists and homosexuals), you can expect the chaos to continue.

Dorothy Kane - 06/04/2020 10:27 AM
I do not agree with Marlene DeZarraga AT ALL! The Church, especially in Miami, serves and supports Black communities, perhaps, the most in the Unites States. It is precisely our schools and churches that have the concern for all, no matter the race. Who organized and welcomed the Haitian, Cuban and other immigrations? Who educates them in the school system? Who has a number of Black and Hispanic clergy so high (majority!)as it is in Miami? I understand that everyone is horrified about what happened to George Floyd. This should never happen and cannot happen again. However, blaming the Church for everything, is not a good thing at all. Let's put the blame where it belongs, and not make the Church (again) the blame for all evil in the world.

Marlene DeZarraga - 06/04/2020 06:21 AM
I agree with Jackie's previous comment: What specifically is the ADOM doing or planning to do to help eradicate racism? It is not enough to issue blanket statements assuring people that we must pray and seek unity. That's too general. The Church must be proactive: Priests and deacons need to discuss anti-racist messages in their homilies. I was surprised that last Sunday (Pentecost Sunday), not a word was mentioned about it in the sermon given. Not saying anything is dismissing the issue as unimportant. Just as the U.S. Catholic bishops have spoken out : U.S. Catholic leaders said recent events served as a “wake-up call” to the racism that continues to plague the country, while encouraging non-violent protests as a means of effective resistance. So too, pastors and deacons need to address racism more proactively, especially as it relates to Catholic social teaching, during Mass. The more privilege is recognized and addressed and the more people seek out their colleagues of color, neighbors of color, and discover their stories and experiences, the more change can happen. Just as VIRTUS is required for anyone serving at church, an anti-racism course should be required for clergy, church staff, and volunteers. Anti-racist curriculum must be added to the religion classes taught in archdiocesan elementary and high schools and CCD programs. Racism is not a thing of the past or simply a throwaway political issue to be bandied about when convenient. It is a real and present danger that must be met head-on. As members of the Church, we must stand for the more difficult right and just actions instead of the easy wrongs of indifference. Let us DO SOMETHING.

Marlene de Zarraga - 06/03/2020 08:39 PM
I agree 100 percent with Jackie’s comment below: “What specifically is the ADOM doing or planning to do to help eradicate racism? It is not enough to issue blanket statements assuring people that we must pray and seek unity. That's too general.The Church must be proactive ... Please, be different and DO SOMETHING.” I have some suggestions: 1) priests and deacons must address the issue in their homilies. (What would Jesus say / do if he were here now ? I was very disappointed when it was not even mentioned on Pentecost Sunday. 2) As a CCD teacher I definitely plan to address it in my classes. 3). Curriculum on being anti racist NEEDS to be part of diocesan school religious education classes. There IS A LOT OF WORK TO BE DONE ! LETS DO IT.

Jackie - 06/03/2020 05:32 PM
What specifically is the ADOM doing or planning to do to help eradicate racism? It is not enough to issue blanket statements assuring people that we must pray and seek unity. That's too general.The Church must be proactive. Just as VIRTUS is required for anyone serving at church, an anti-racism course should be required for clergy, church staff, and volunteers. It should also be be required in CCD classes. Please, be different and DO SOMETHING.