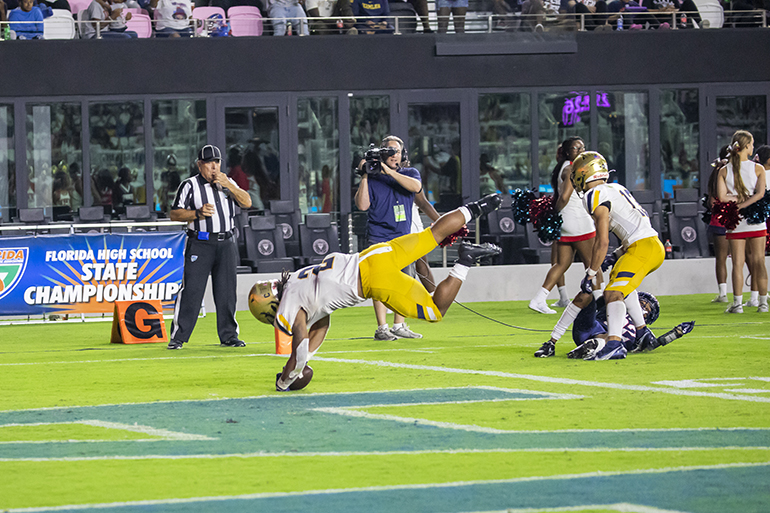 St. Thomas Aquinas running back Anthony Hankerson (2) dives in with the ball to score the school's sixth and final touchdown during the Class 7A State Championship game between Aquinas and Tampa Bay Tech at DRV PNK Stadium in Fort Lauderdale, Dec. 17, 2021. Aquinas won the championship with a final score of 42-14.

FORT LAUDERDALE | Little did the St. Thomas Aquinas Raiders know that a loss to a Tampa team would pave the road to a state-title victory over another Tampa team. Senior Anthony Hankerson helped the Raiders clinch a three-peat, running for 117 yards and three touchdowns on 11 carries to help Aquinas rout Tampa Bay Tech 42-14 on Dec. 17, 2021, in the Class 7A football state-championship game at DRV PNK Stadium in Fort Lauderdale.

Aquinas senior Zion Turner, who along with Hankerson played during this entire three-peat, threw for two touchdowns. The Raiders (14-1) recovered from a 24-21 loss on Sept. 3, 2021 at future Class 6A champion Tampa Jesuit to rattle off 13 wins in a row. Their victory over Tampa Bay Tech gave the Raiders their state-record 13th championship, two more than Jacksonville Bolles. 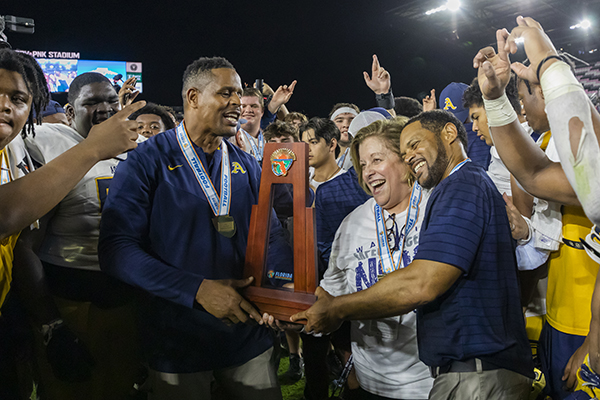 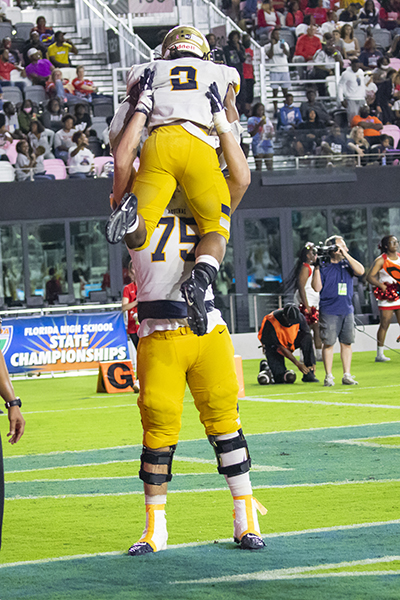 St. Thomas Aquinas tackle Julian Armella (75) lifts up running back Anthony Hankerson (2) in celebration after Hankerson scored the school's six and final touchdown during the Class 7A State Championship game between Aquinas and Tampa Bay Tech at DRV PNK Stadium in Fort Lauderdale, Dec. 17, 2021. Aquinas won the championship with a final score of 42-14. 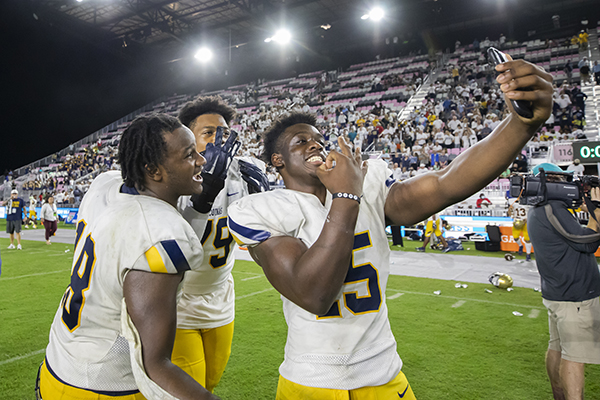 It’s the second time the Raiders have won three titles in a row, the first coming on a 2014-16 run. It’s the fourth title at Aquinas for coach Roger Harriott, who also won a 2012 title at Fort Lauderdale University School.

“We’re going through difficult times in the pandemic. Our leaders facilitated the need to have each other’s backs and understand the importance of accountability,” Harriott said. “As a result, we were able to pull together a strong, family-oriented culture at St. Thomas Aquinas.”

RAIDERS GET THE JUMP

Turner completed 10 of 13 passes for 102 yards for the Raiders. He said the Raiders found the Titans secondary a weakness they could exploit.

“We ran a couple plays that tricked their defense,” Turner said. “We just executed. Their safeties were undisciplined and came out real fast. We hit them with fake screens, and they bit.”

St. Thomas Aquinas jumped on the first-time-finalist Titans, racing to a 21-0 lead in the first quarter. The rout was on.

“We’re always humble, but we have the mindset that defense wins championships,” said defensive tackle Justin Fevrier, who had seven tackles, 1 ÃÂ½ tackles for loss and one sack. “The first thing with the defense, the defensive line must pursue the ball, while the linebackers clean up the mess. The defensive backs stay in their coverage to make sure everything’s secure.”

The task then turned to keeping control of Tech quarterback Xavione Washington, and the Raiders bent but mostly didn’t break. Washington completed 21 of 34 passes for 249 yards and one touchdown, but he also had one interception. Greg Gaines caught seven passes for 131 yards and a touchdown. However, Raiders defensive backs Kimari Robinson and King Mack kept Gaines and Santonyo Isaac controlled when it mattered. Robinson broke up four passes.

Robinson said that the 6-foot-2, 180-pound Gaines tested the Raiders, but the Raiders have been playing great receivers all season. Mack, who made four tackles and broke up a pass, said their film study actually helped decode when Gaines would get the ball.

“We knew if they had trips (three receivers) and (Gaines) on the opposite side, we knew (Gaines) was going to run a slant or a go route,” Mack said. “We also stacked the box and played zone. We showed that we were going to play (man-to-man defense), but during their cadence we would get back in zone. They would think we were blitzing, but we weren’t.” 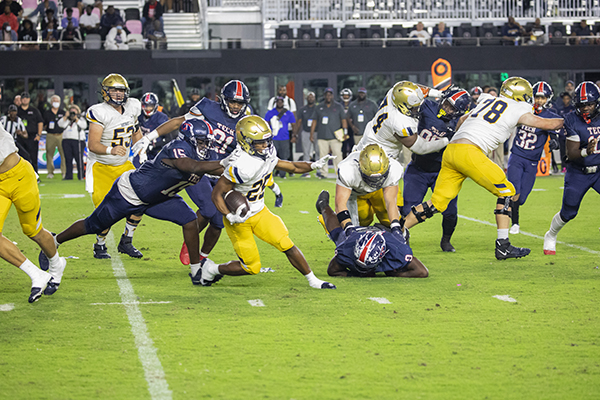 St. Thomas Aquinas running back Xavier Terrell (25) runs the ball during the Class 7A State Championship game between Aquinas and Tampa Bay Tech at DRV PNK Stadium in Fort Lauderdale, Dec. 17, 2021. Aquinas won the championship with a final score of 42-14.

After the Raiders got a fourth-down stop to open the second half, Turner ran for 46 yards, then hit Isaiah Hardge on a post route for a 21-yard touchdown that put the Raiders up 35-7.

Jordan Smith then intercepted Washington, putting the Raiders on their own 44. Hankerson then ran 9 yards, then 31 yards before taking a misdirection play 16 yards for a Raiders touchdown. Michael Kern’s extra point put the Raiders up 42-7 with 2:23 left, triggering the FHSAA mercy rule of a running clock.

Ronald Sims’ 1-yard touchdown on the next drive was too little, too late for the Titans. The Raiders held 1,000-yard rusher James Evans to 2 yards on 2 carries. Sims ran for 52 yards on 13 carries.

Raiders senior linebacker Derrieon Craig, who had a team-high eight tackles, said the main focus was Washington, who also ran for 27 yards on 12 carries but was sacked four times. “The defensive line pushed, the linebackers played well, and the defensive backs flew to the ball. If the quarterback starts moving out of the pocket, we start giving opportunities to our defensive backs,” Craig said.

The Raiders consider state championships an expectation, with national titles being the main goal. It doesn’t matter if you’re having to replace several key seniors from last year. The Raiders had to replace their top four receivers, their top 10 tacklers, all but one of their athletes who registered a sack and all but one who registered an interception. Among the names lost to graduation were defensive back Jaden McBurrows and defensive tackle Dallas Turner.

Mack said skeptics and fans thought the Raiders would have a down year because of having to replace several stars. The Raiders, instead, went to work. Several of the starters knew what it felt like to prepare for a state champion, and they wanted to amp up the work.

“They thought this was St. Thomas’ off year, but we used that as motivation,” Mack said. “We would grind, we went to the weight room. We knew we were underdogs, but the only way for people to stop looking at us as underdogs is to win. That’s why we scheduled St. Frances and the others. St. Thomas is never an underdog.” 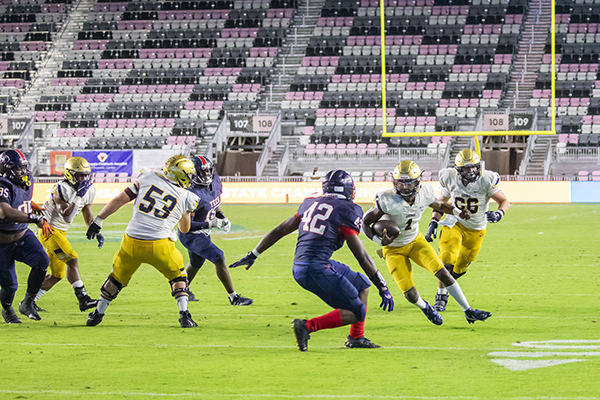 St. Thomas Aquinas quarterback Zion Turner (1) runs the ball during the Class 7A State Championship game between Aquinas and Tampa Bay Tech at DRV PNK Stadium in Fort Lauderdale, Dec. 17, 2021. Aquinas won the championship with a final score of 42-14.

Turner and Hankerson brought back skill talent, while running behind a line that featured three senior starters. Hankerson said that the line featuring Florida State signee Julian Armella, Dawson Alters and Tellek Lockette played a huge role in their success, playing like big dogs while relegating their foes to puppy status.

“Most of the guys, they’re not necessarily the biggest unlike previous (Aquinas) offensive lines,” Hankerson said. “But they’ve got probably the biggest dog mentality. By them not being the biggest, they stepped up and managed to dog their opponents out.”

Harriott set St. Thomas Aquinas up for a potential title with a schedule that included an opening clash at St. Frances Academy out of Baltimore, a team that would end up No. 4 on the MaxPreps rankings. The Raiders won 38-23.

Little did they know that Tampa Jesuit could stand toe-to-toe with the Raiders. With both teams needing a last-minute replacement foe for a Sept. 3 date, the Raiders traveled to Tampa for a game against the future Class 6A champion Tigers. Six turnovers later, Aquinas limped out of Tampa with a 24-21 loss. Jesuit finished the season ranked No. 8 in the MaxPreps national rankings, just ahead of Aquinas’ No. 9.

Harriott said the Raiders learned to not take things for granted after that loss. Mack and Robinson called the game a needed wake-up call, with Mack saying the team needed to weed out any negative energy among its athletes. “We knew we had a comeback story in mind,” Turner said. “We wanted to show we can really destroy teams.”

They got back on track with a 24-16 win against Plantation American Heritage, a team that played five state champions going 2-3. Their next speed bump came against Fort Lauderdale Dillard, a 23-13 win over a big-time rival. Robinson said the Raiders didn’t underestimate Dillard, but that Aquinas needed breaks on special teams and great defensive plays to win.

St. Thomas Aquinas then dominated their remaining foes, including winning all five playoff games by a 45-9 average.

While most people think of St. Thomas Aquinas as a football factory, Harriott considers the team a ministry. He said his goal was to build the Raiders not only into top football players, but also top men. Daily prayer among the team is always a big part. 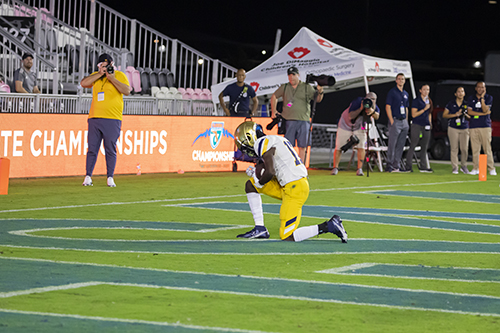 Receiver Mason Taylor said that the Raiders do a lot of faith-building in-house, challenging the senior leaders to be people of good character. “Coach is a religious dude,” Taylor said. “We pray maybe five times on game day. We wouldn’t be here doing anything without God.”

Many players pointed to the daily Bible verses he texts to the team early in the day. He then quizzes players on that verse at practice.

“For us, it goes way beyond the football field,” Harriott said. “Football is a small part. Football is something you do, not what you are – a faith-based man. Family is what we are.”

Hankerson said the team still had to manage the pandemic, keeping distance but still praying as a team. Brown and Mack talked of praying by the Mary statue, singing religious songs. Mack said the team captains would point out areas on which the team needed to focus, then they would sing “Never Would’ve Made It” by Marvin Sapp before they went to play.

Fevrier ultimately said that daily prayer makes sure the athletes remember who created them. “It’s a tradition where we should never forget who we are – being blessed every day. Relying on hope, relying on faith.” 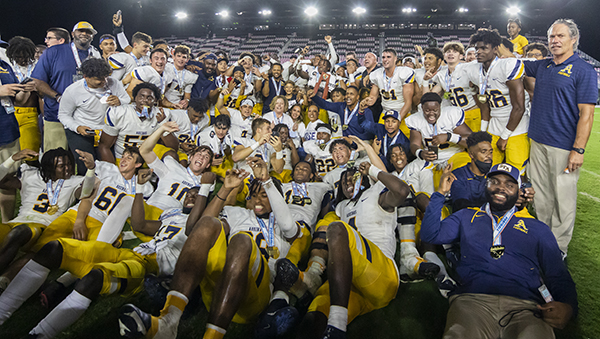 The St. Thomas Aquinas Raiders celebrate after winning the Class 7A State Championship game against the Tampa Bay Tech Titans at DRV PNK Stadium in Fort Lauderdale, Dec. 17, 2021. Aquinas won the championship with a final score of 42-14.

Harriott said the camaraderie helps teammates lift each other in times of trial. “Some people look at football as a game you play. We look at it as a game of life we live. For us, it’s a true family brotherhood.”

Each player also talked of continuing the legacy. Turner challenged the returning Raiders to get ready to get back to work. Hankerson talked of the transition he made from special teams and linebacker as a freshman to three years as a starting running back. Both said that the challenge was stepping from being led to being a leader.

Mack said the returnees need to prepare to work harder during summer workouts they call Summer Sacrifice than they did this year. “The plan this year is to go undefeated and win the state championship and GEICO (national) championship,” Mack said. “Next year coming up, we’re going to be something serious. We’re grinding harder. There are going to be more expectations. We’re going to be the St. Thomas everyone has been waiting on.”

Hankerson challenged future Aquinas teams to embrace this philosophy: “We look at every game as if it’s the state-championship game, whether it’s the first game or the third or the final,” he said. “It’s a state game until we get to the big one. That way, when we get to the big one, we don’t fold under pressure. It’s normal to us.”